Editor’s note: my blog host has become stupid and made it impossible to blog as I’ve been doing for more than five years. This has made three of the four posts I put up for Kerala invisible to most readers. I’m fixing this now by acting like I posted some of them in different months, later. I’ll fix this more permanently, some time soon I hope, by changing the host of my blog. Suggestions on this topic are most welcome. For now, look at the “previous posts” listing on the right-hand side of the main page, and scan past posts, in order from top to bottom, or you may miss things… Sorry!

Padmanabaphuram Palace, above and farther below, was home to the kings of Travancore, straddling modern-day southern Kerala and bits of Tamil Nadu. It’s the most exquisite example of traditional Keralan architecture still standing. Below, and then even further below, are shots of sunrise and sunset at Kanyakumari at India’s southernmost tip. 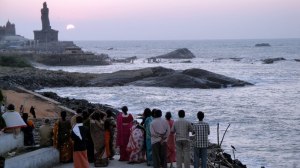 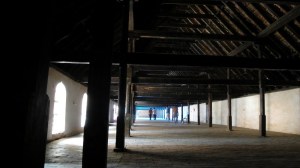 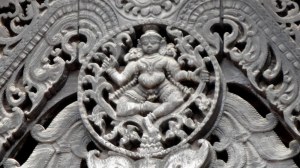 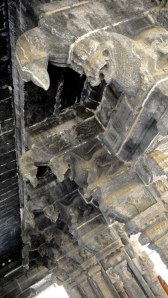 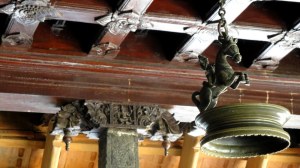 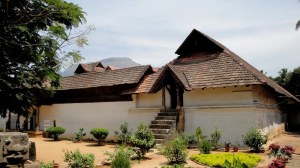 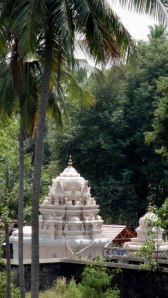 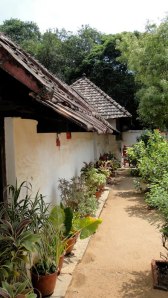 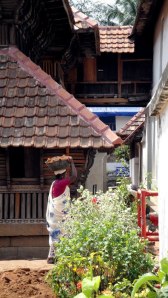 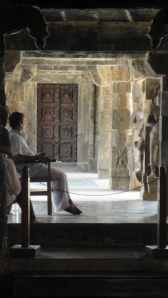 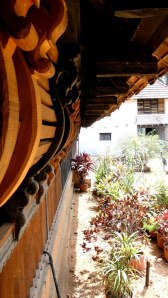 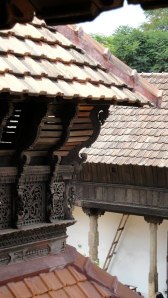 Open doors between train cars could be a dangerous enticement. Ever an adrenaline junkie, I’m tempted most on the bridges suspended over a wide, shallow river with banks of deep red soil: so tempting to make the leap and join all those kids down below playing and bathing, adults doing their ablutions and women washing laundry. Barring that, simply to sit in the doorway, hand wrapped around the nearest fixed object and to lean my head into the onrushing wind like a dog on the highway to scan the red-dirt villages, coconut & banana groves, trails full of kids on bikes and adults carrying loads on their heads or backs, is far more enticing than the dark and cool of my 3rd A/C coach seat through that other door to my right. But at least this way I’ve a retreat for when the heat overtakes me or the rushing wind dries my eyes…or when we’re stopped in station and the urine stench from those who couldn’t wait for the long station-stop to end before responding to nature’s call overwhelms my tender nostrils.

The four-hour journey from Varkala south to Kanyakumari takes me through Thiruvanatapuram, Kerala’s second city & seat of government, and past the tourist haven of Kovalam to its south, onward to India’s tip where three oceans meet: Arabian Sea, Indian Ocean & Bay of Bengal; waters especially holy to Hindu devotees of the virgin goddess Kumari. I’ve been in flatlands since I landed at Kochi a week earlier – much of the backwaters is below sea level, prone to flooding when the monsoon is heavy and vibrantly, endlessly green even now, several months into the dry season. As tthe rain follows the continent’s curve eastward to join the subcontinent’s east coast curving down to the narrow tip, I notice that our inward, eastward curve brings the southern reaches of the Ghats, mountains whose name I’ve read but never before seen, within range of my curious and questing eye. Strangely, after the verdant aqueous landscapes I’ve been surrounded by for weeks, my firs view of these southern outposts of the Ghats calls me back to the desert of southern New Mexico and the Organ Mountains between Las Cruces and Alamogordo, so named because their sculpted vertical rock faces are reminiscent of an organ’s pipes. 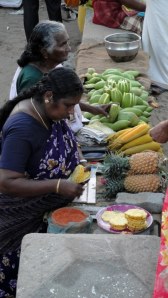 The British, in their wisdom, decided that Kanyakumari – like many Indian locations – needed a name easier for their palates and brains to keep track of. So they called it Cape Comorin. Personally I find Kanyakumari far more flavorful, and it carries with it the name of the virgin goddess Kumari who did her penance here in order to marry Shiva (I’m fairly sure he’s another avatar of Krishna, but who could possibly keep track of all these deities and their avatars?), only to be told by the powers-that-be that she should remain virginal ‘in order to save the world,’ so saith my guidebook. Interesting notion, that. In any case: Kanyakumari is a gorgeously situated little town where the east coast and west coast of India meet in a tip pointing south, where three oceans come together and create water even more special than most rivers and seacoasts in India. Thus come the pilgrims to bathe at sunrise and sunset, thus come the sick and lame in hopes of cure; thus come the groups of schoolkids to scream with joy at the sun’s rise and set each day. The atmosphere at sunrise and sunset here, each day, is a combination fourth-of-july, carnival, and Indian temple, all to the accompaniment of pounding waves, vendors hocking tea or decorated seashells or chile-spiced pineapple slices. 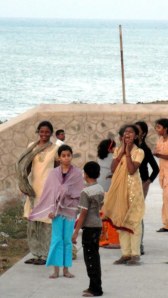 These particular schoolgirls were quite determined to impress the sun, their teachers, or perhaps the schoolboys clumped in their own groups with the conviction and determination of their screams in honor of the rising sun.

The big statue represents Tiruvalluvar, apparently one of the great Tamil poets. To the left is the temple to Kumari (I think), and somewhere in there is a memorial to Mahatma Gandhi, where his ashes were kept after death until immersion. I was lazy by this point in my vacation so I only really got out to see the sun go up and down, and didn’t do much else.