In the middle of downtown Port au Prince sit quite a few monuments to Haiti’s early history: statues commemorating founders of the nation such as Jean-Jacques Dessalines and Henri Christophe; an unfinished tower which was meant to commemorate the country’s liberation from slavery at the 200th anniversary of the nation’s founding (1804); the marble-fronted three-sided column with texts from Haiti’s first constitution, drafted in 1801 by Toussaint Louverture, who is my personal most-want-to-meet person from history, along with Queen Elizabeth the first.

Also in the heart of town is the MUPANAH, musee du pantheon national d’Haiti. (It’s the building with the tiled mosaic features – the museum is underneath those unique skylights.) This fantastic site is both a truly interesting museum with displays on Haiti’s history from the native-American era to the present — and also a symbolic pantheon (guides tell us the actual earthly remains aren’t there, more sort of symbols or something – I haven’t asked for specifics) to four of the most important early leaders and founders: Tousaint, Dessalines, and Christophe, along with Alexandre Petion. Which bring us to the numbers game.

On a wall at the end are photos or paintings of nearly all the heads of state in Haiti’s history. Having now led groups of
international staff on downtown tours several times, always ending at the museum, I’m digging into more of the details. Last time, I read all the details under some of the presidents’ photos, such as when the Palais Nationale was built — the 1880s if I recall right. (That’s the president’s palace, which was badly damaged in 2010 and not yet functional again.) I also did some counting, looking for other ways to frame this nation’s complex, impressive and at times rather depressing history. How many elected presidents has Haiti had? 41. How many unelected heads of state and interim government councils or military juntas or councils of ministers has it had? 26.

Toussaint’s constitution was the first, in 1801. I’m sure it’s unique in human history as the very first time any constitution stated that slavery shall not exist. After all, Napoleon’s reaction when Toussaint sent him the draft for approval was to send hundreds of ships and tens of thousands of soldiers. Not hard to understand that the 400,000 or so self-liberated slaves here pretty much reacted to that with a “fuck you very much.” How many other constitutions? The total number of constitutions this country has known, starting with that 1801 version, is 23.

Most Haitians I’ve spoken with will explain that the US has invaded twice. The first was in 1915, an invasion which lasted until 1934. Like the more-recent US occupations of Iraq and Afghanistan, Haiti continued to have presidents and a government formally its own…but with a bunch of American soldiers toting guns around, you can imagine how empowered that government and its citizens felt, eh? (And let’s be honest about white American soldiers occupying a black republic in 1915 and how respectful they likely were?) In the 48 years prior to that first invasion, Haiti saw 22 heads of state. The second US invasion was 1994, when the marines marched in to restore an elected president (Bertrand Aristide) to power and remove a military government. In the years between 1986 and 1994, Haiti had seen 10 heads of state and provisional ruling councils. Progress is hard to build and continue, when governance can’t be stable and transition reliably, and when outside powers and groups wield such influence, or invade at will.

Obviously the nation, its people and its history are more than numbers. Obviously there are human families, individual human stories of success and frustration, failure and achievement woven into the 225 years since the only successful slave revolt in human history rose and burned down the first colonial plantations on the Plaine du Nord in 1791. The numbers are but one way in – an invitation for those wanting to explore more deeply to do so. At this time, in these weeks and months to come following Matthew’s unwelcome visit, I for one am trying to remember this. 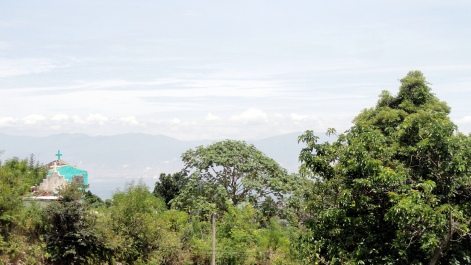 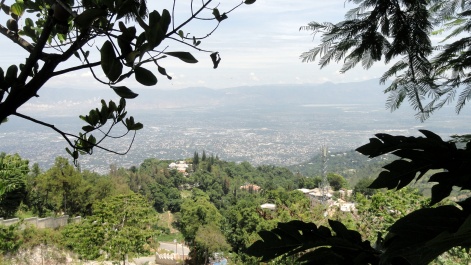 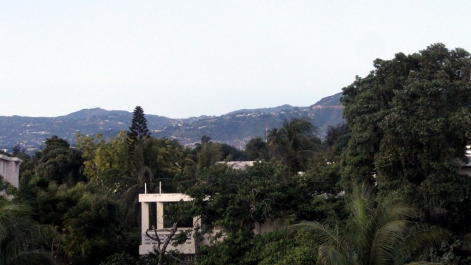 Napoleon Bonaparte wrote the following, in his memoirs from St. Helena: J’ai a me reprocher une tentative sur cette colonie, lors du consulat; c’était une grande faute que de vouloir la soumettre par la force; je devais me contenter de la gouverner par l’intermédiaire de Toussaint. (Thanks to Madison Smartt Bell in whose magnificent historical-fiction trilogy on the Haitian revolution I found that.) He’s basically saying that he made a big mistake trying to reconquer the self-liberated former slaves of this colony, instead of being content to rule the colony through their leader. I took the photos in this entry during a weekend morning exploring the heart of downtown Port-au-Prince, which is well-stocked with monuments to this country’s absolutely astounding history. So I’ll just give a quick and highly selective review of that history and ask a what-if or two.

Imagine that a man born into slavery, and without formal education, rises to a point where he organizes and leads a slave revolt which fights off the Spanish and British, restoring control of Hispaniola (the whole island, at one point) to the French Republic. Toussaint Louverture, spurred by Napoleon’s statement that the colony would need some new laws, then drafts a constitution which leaves the colony basically part of France but with a lot of home rule (some quotes are seen below in the three tall photos); and Napoleon basically responds by sending out a massive fleet, betraying and arresting Toussaint so he dies in prison in France…and then the former slaves of Saint Domingue get really mad, and with the help of yellow fever and the leadership of Dessalines and a few other key formerly-slave generals manage to permanently push the French out of the island, thereby defeating one of the world’s most powerful nations. 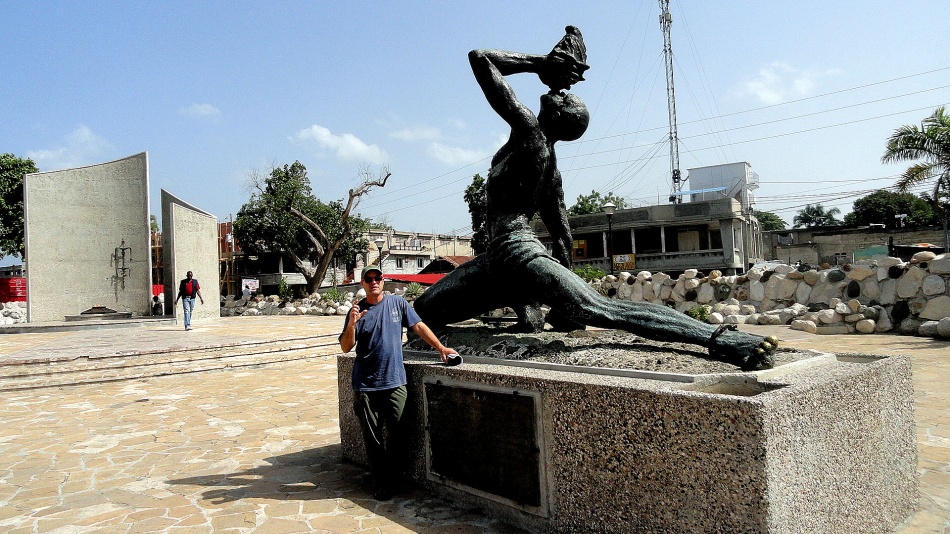 You could be forgiven for thinking such an interesting story would be widely known in the world. You might think the great democratic powers of the day – France and the U.S., eh? – would have welcomed this new republic & bastion of freedom, and developed warm ties of trade and friendship with it. (Especially if you consider that it was Napoleon’s grinding defeat here which forced him to sell the Louisiana territories to the US, step one of our gradual expansion to the Pacific.) You’d be wrong – France ran naval blockades and always threatened invasion until they forced the Haitians to buy themselves free with crippling debts that they were still paying well into the 1900s. (Thought experiment: what if Britain had done the same to us??) The US – with an economy in the south that depended on slave labor and continued to abduct people from West Africa and ship them across the ocean in chains for many more decades – didn’t choose to recognize Haiti’s independence until 1860. (Thought experiment: what if my own ancestors had crossed the ocean in chains and been sold in chains upon landing, rather than being given a homestead of redistributed formerly-Native American lands on the great plains?)

This country has an absolutely amazing history and I find it shocking, if sadly predictable, that its important place in history has rarely been appreciated beyond its shores. It has seemed to me since the 1980s that lots of people outside Haiti are free with opinions about what the country should or shouldn’t do, what’s right or wrong with its government or economic system, etc. – and I really wonder how many of those people with those opinions have taken time to think about (let alone interact respectfully with) the people of Haiti, their history, and their own desires as one of the earliest self-created nations in this hemisphere. Though it’s been shattered by the earthquake and battered by violent changes of government many times in recent decades, Port-au-Prince remains a great place to ponder this country’s rich history…and to hope for a brighter and more prosperous future with, might I add, a bit more external respect shown for this country and its people. 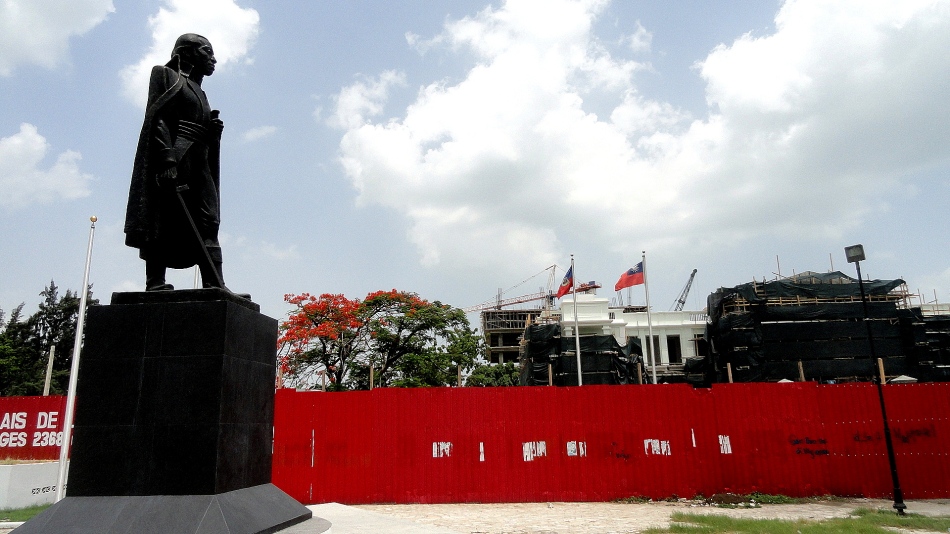 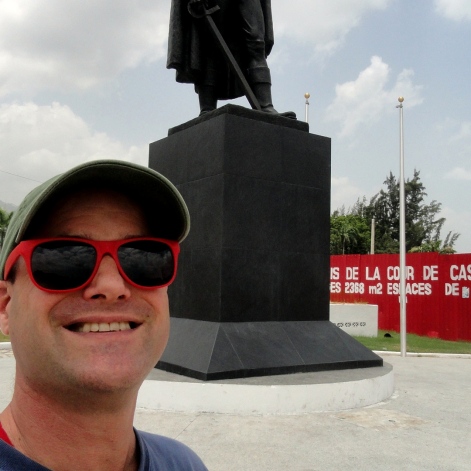 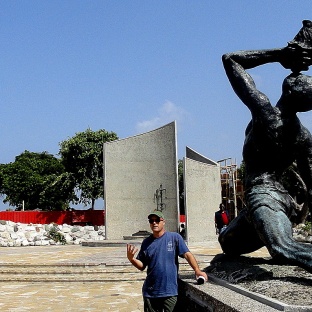 …immediately above is the monument to Dessalines. As you can tell, much of downtown is still under reconstruction but I’m told the pace seems to be picking up. Below is the eternal flame (to honor, I think, the original self-liberating revolutionary ex-slaves), with the new court house next to it; the big statue of the man blowing the conch shell in the Unknown Maroon – maroons being slaves who’d run away to the mountains during colonial times. Further down is a tap-tap with colorful paintings against sexual and domestic violence (which showed up at the opening to our new SGBV clinic), and the lovely old medical school building, which I guess either survived the quake or has been restored more rapidly than many others. The graffiti, I believe, expresses the hope that Haiti’s coming back into its strength again. 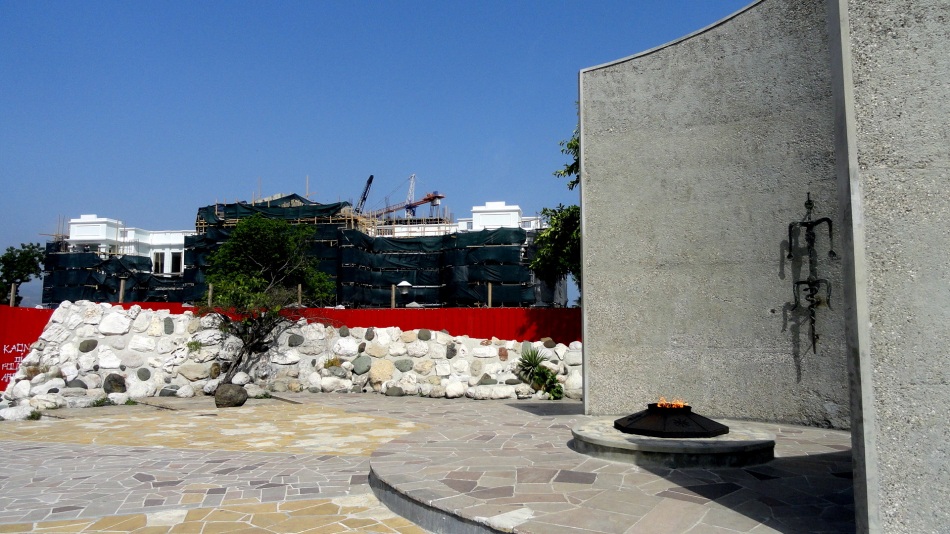 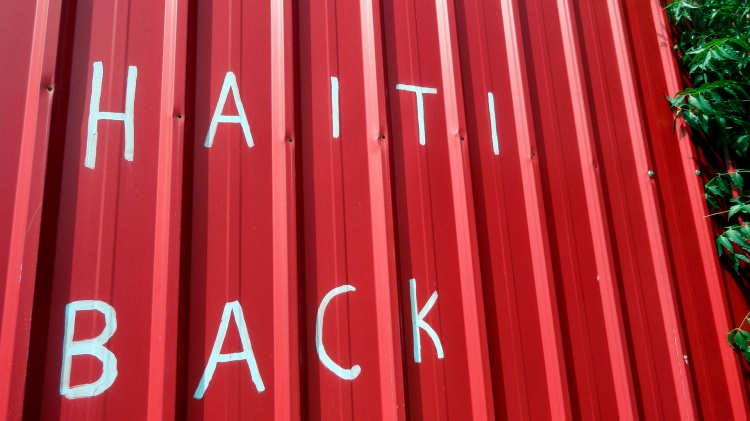 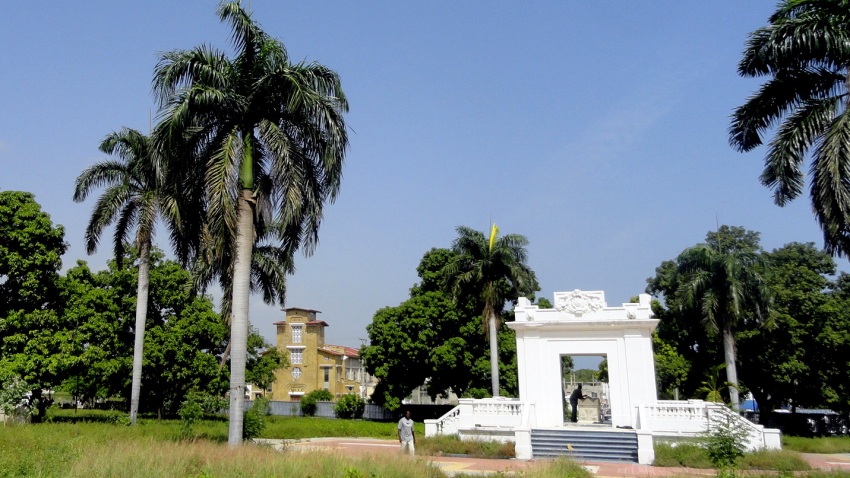 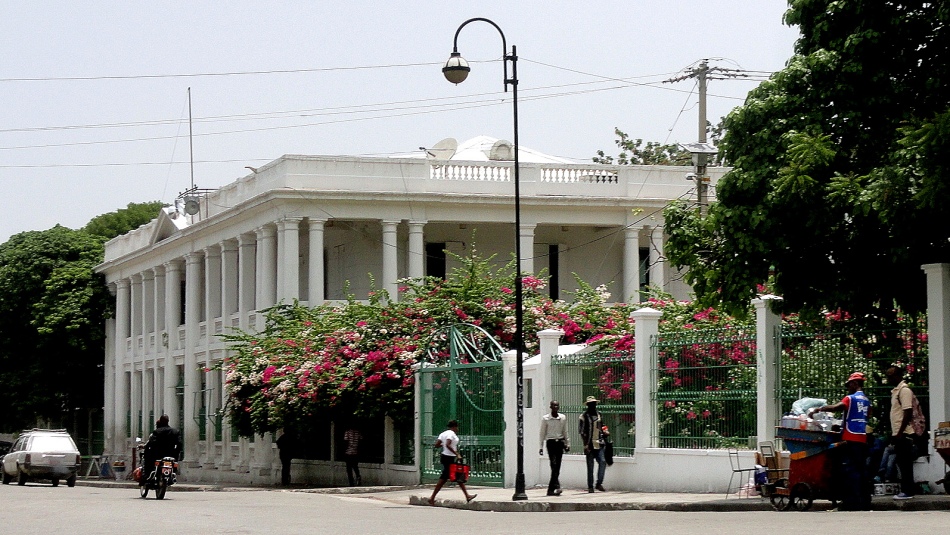