So back on January 26 as part of my daily ode to the lovely beach at Cox’s Bazar, I posted some photos of this dead sand crab and this dead jellyfish. Bandwidth then and there was insufficient to give you these videos, which make the jellyfish look almost alive and show the flies already at work on the sand crab. Ah, the circle of life… 🙂

Mostly when I walk the beach, I’m taken by the beauty of shells glistening in the sun after a wave’s retreat. Or the feel of the sand in my toes, the sound of the surf in my ears, the salt smell in the air. At times I’m reminded that all life requires nourishment. And that, as the old saying goes, it’s a dog-eat-dog world out there. The first new sight to greet me was I wandered the tidal river that makes a good path northward in one part of the beach, this morning, was the quite sad deceased turtle you see below. For those of us who love marine wildlife, especially sea turtles which are everywhere so threatened, it’s another sad loss. It also caused me to wonder what story the sand could tell: my photo didn’t capture all the claw marks, next to the turtle — but drag marks from many claws suggested that a battle led to the death of the turtle and its subsequent decapitation. I suspect a dog but can’t prove it. (I do not possess the skill of Legolas in the first chapters of The Two Towers, sorry to say…)

This initial, sad introduction to the harsher realities of life in the tidal zone here caused me to view later observations through a new lens: does the spiral shell with a smudge next to it represent a place where a mollusk lost its fight for survival to the teeth of a larger predator? What story is told by the crab claws scattered here and there along one stretch of the sand, with nearly the full shell of the now-ex crab just a bit further along? And then there are the humans, gathering their mollusks or collecting their fish. Or the deceased jellyfish which I at first took, from a distance, for a blanket or sheet that had been blown into the waves. All life requires food, and most life tries to avoid becoming food unless, like apples and berries, that’s how it creates future generations. 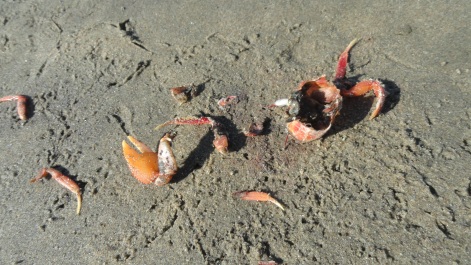 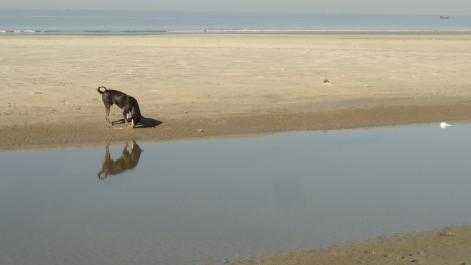 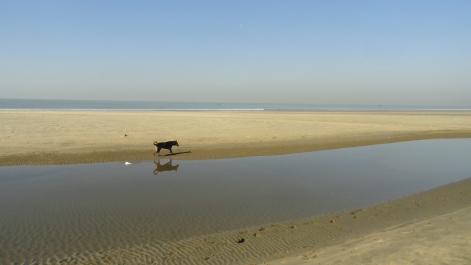