(Note from October 2016 – I’m slowly updating all the older blog posts to bring all the photos into one post rather than one by one, as I had to post them when I had to email photos to flickr in order to get them into my old blog…they’re still very low resolution and tiny images, sorry…but at least the posts will be more coherent, and I’m finding some other photos that had gotten lost through the emails or the censors or whatever over the years…)

Since I’ve been showing shots of the more touristy and lovely parts of China — Beijing, Nanhu Park and dowtown skylines in Nanning, and Hong Kong — I wanted to give you all a sense of the contrasts between wealth and poverty, developed and undeveloped, that we see every single day in Nanning. I hope there will be more of these photo tours
later, if you like this — I admit at the outset that I may have gone overboard. But I find these contrasts and views and ways of life absolutely fascinating. Though the blog will show these as posting on

Friday, June 17, here in China it is Saturday morning, June 18. I took my little digicam along for my run on Thursday morning, since my running route presents a good number of contrasts that Americans and other developed-world folks would find interesting I think.

So herewith, Paul’s running tour of the southeastern corner of Nanning. I also note at the outset that I’m trying a new method of posting photos, which may or may not work as I hope. I’m sending batches at one time, with a text block that’s meant to accompany all of a group. If the blog works as I hope, the text will appear only once. I’m afraid, though, that the text may post with each individual photo. If this happens, I apologize and hope you won’t be discouraged from clicking onward to see the rest of the photos. As you know, I have no ability to access my blog itself and thus manage its presentation better, while I’m here in China. When I get to Hong Kong or elsewhere where the restrictions on web content are not applied, I may be able to fix this. 🙂 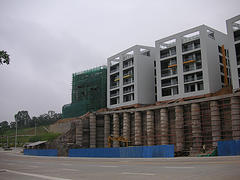 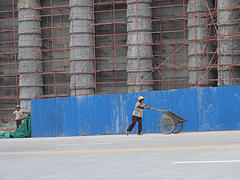 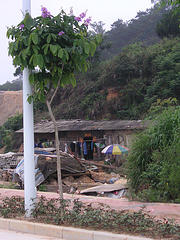 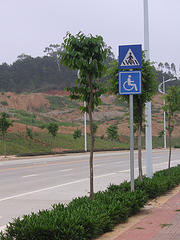 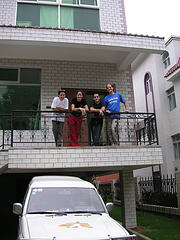 In any case I hope you enjoy these shots. They include me and my housemates on the steps of our house, and the house next door to ours, which has been under construction for a while. These are pretty glamorous — enough that I’ve been embarrassed to show our house until now, when I could give you some context for it. My housemates are
(left to right), Francoise (doctor at AIDS clinic, French), Laura (nurse at clinic, English), Manuel (country logistician in
coordination, French with Spanish Mom), and me of course. The other shots show the street corner just uphill from my compound, with the start of lovely big Green Mountain Park on one corner, a new complex just going up on another corner (the big pylons you see, and the woman with the wheelbarrow), and two other complexes on the other two corners.

One last note about the construction in our compound. I’ve said before that it ain’t the unionized crews we know in the US…these guys work from 6 or 7 AM until 7 or 8 or later at night. Often when it’s hottest, they do the hottest work until midnight – roofing and tar and stuff. And another interesting factoid: the construction crews live in
the house they are building. There must be running water brought in, since I don’t see them carrying water, but I do see them showering and doing laundry (yeah, they shower in the houses without windows and stuff) and hanging the laundry out to dry…and cooking dinner and watching TV on the mounds of dirt on the ground floor at night. Guess
that means they have electricity already, too, which makes sense since I hear them using buzz saws and stuff a lot, too. Anyway, it’s interesting, though dusty and loud.

The work continues well. We’ve just submitted our second-half budget reestimation (my first big financial job), which included our action plans for both projects and coordination for the balance of the year. I can now say that the coordination team (with me) will move to Beijing in the fall, so the AIDS clinic here in Nanning can grow up a
bit more independently — this is the more typical MSF model around the world. For MSF it’s been a bad couple of weeks: colleagues arrested in Sudan, kidnapped in Democratic Republic of Congo, the anniversary of the murders of colleagues in Afghanistan. We’ve all felt these losses and worries, since many of us know people who work
in these places. But here in China, we’re trying to grow our projects and continue to take care of our clients, and it’s nice we can do this in a climate without serious security concerns. And I continue to be very happy I’ve made this choice, though I do miss my friends and family.

Take care, enjoy the photos, and keep in touch.

This entry was posted on June 18, 2005 by somuchworldsolittletime. It was filed under China, Guangxi and was tagged with Construction in China, Nanning.