There will be 54 candidates on the ballot when Haitians vote for president on Sunday. Driving through the streets along one of Port au Prince’s wealthier neighborhoods recently, I commented to a Haitian colleague on a trend I’d noticed: no posters visible anywhere around for the Lavalas party. By contrast, in other more crowded parts of town I’d noticed plenty of posters. I figured I knew why – and my colleague’s response put it clearly: Lavalas’ supporters are the children of Dessalines, and the wealthy neighborhood is the children of Petion. Indeed, the wealthier neighborhood is named Petion-Ville, and in the poorer parts of P-V you will find a few Lavalas posters, but not higher on the hills where the big houses are.

Haiti’s founding, as anyone who’s followed my blog knows, inspires me with awe. That several hundred thousand slaves could rise up and free themselves, in the process pushing back the armies first of Spain and Britain, then finally being the first army in the world to defeat the concentrated attempt of Napoleon Bonaparte to force their submission, is a simply unique event in human history. Unfortunately that early history held the roots of a rich-poor, powerful-powerless divide that remains present in Haiti today. Describing the wealthy as children of Petion refers to his ancestry as mixed-race son of a wealthy white plantation holder, compared to Dessalines’ (& Henri Christophe’s) purely-African ex-slave background. But it’s worth noting Petion made himself president in the republic that governed the south of the country, after Henri Christophe made himself king in the north…after both he and Petion were among those in the government conspired to kill Dessalines shortly after Dessalines crowned himself emperor for life. So things got complicated fast, and it’s not always purely about power, wealth, or ethnic background.

On Sunday, Haiti holds the first election since 2010. Races for parliament and for municipal posts have been successively postponed by the current government, the last several years. In January, parliament was dissolved and the current president, elected five years ago and in office since February 2011, has been ruling by decree since. He stated that he’d use his power of decree only to ensure that elections did happen this year for all offices. On Sunday Haitians will vote not only for the next president, but also for all municipal offices around the country, all deputies and most senators. There will almost certainly be a run-off for president at the end of December, and many of the coming weeks will doubtless be absorbed with arguments over which two candidates will be on that final ballot. 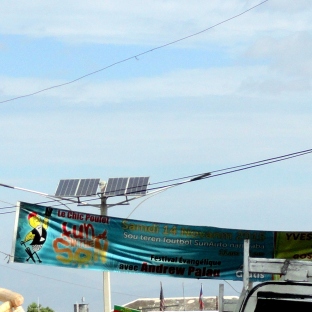 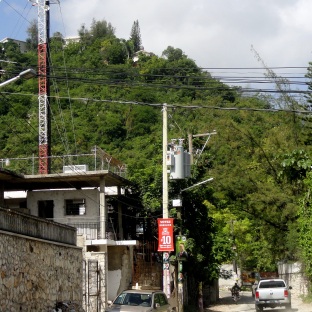 Every photo in this post has a campaign poster, graffiti or some other electoral element to it. If you can’t see it in any picture, look harder :-). 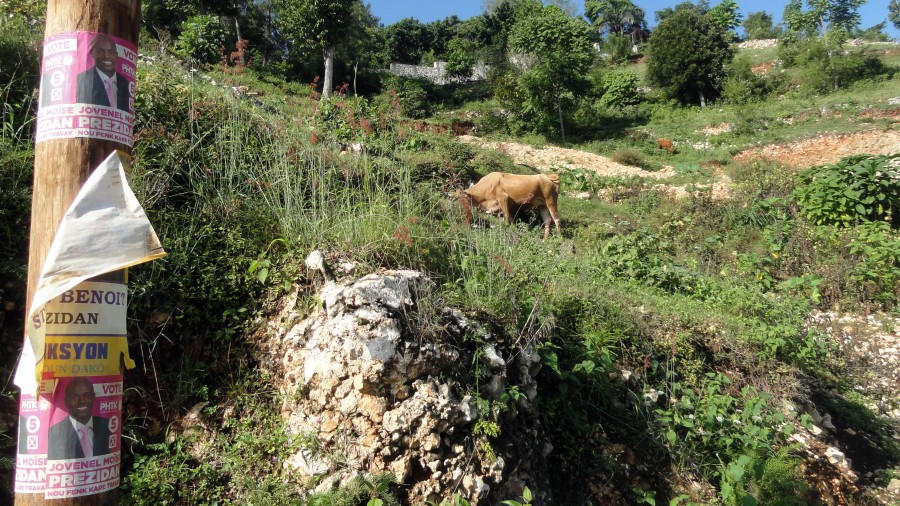 Americans of my generation remember Bertrand Aristide and his election as president in 1990. Many then lost sight of him, and got lost in the details of Haitian politics fairly soon after, but to recap, Aristide was ousted seven months after taking office (military coup), returned in 1994 to finish out his term; was succeeded by Rene Preval (presidents can’t serve two terms in a row, and can’t serve more than two total, under the post-Duvalier constitution); was re-elected in 2000 and held office from early 2001 until forced out of office by an organized and armed opposition movement in 2004; was then succeded after the 2005 election again by Preval, who was succeeded after the 2010 election by the current president, Martelly. The party Aristide founded, Lavalas, is being permitted to run candidates for the first time 2004 – and though the party has lost some of its shine since the idealistic days of the late 1980s and 1990-91, it seems to me that for many they still represent hope. For many others, it seems they call up fear of a return to violence and strife. I’m hoping for a reasonably peaceful weekend and an electoral result that most Haitians feel is fair enough. Either way, I have to admit I find the all the posters fun, seeing how politicians all over the world promise the same things, do the same things…a pothole on our street just got fixed last weekend! Just like NYC during election season, eh? Above all I join many friends and colleagues in hoping for a maximally non-violent weekend and subsequent counting period… 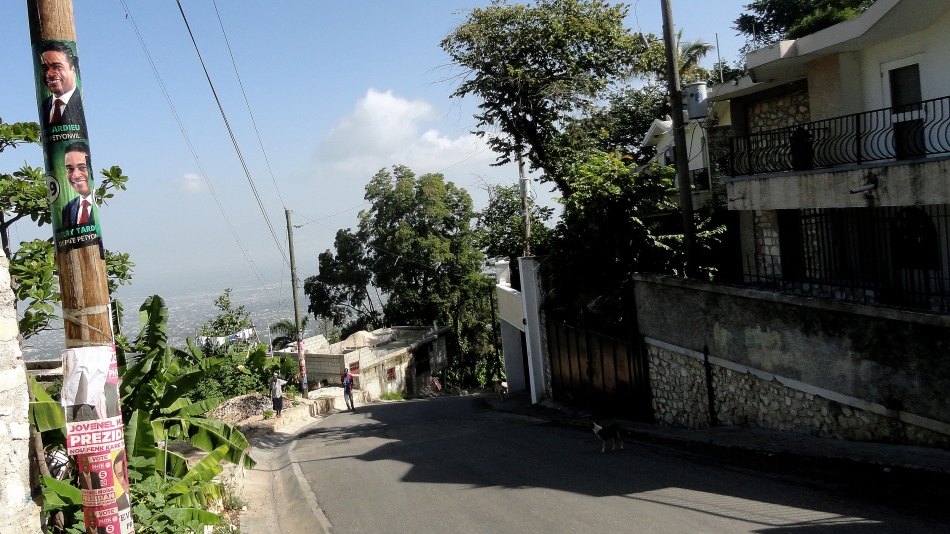 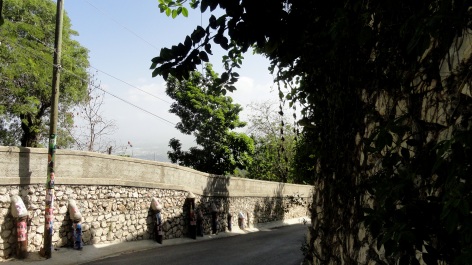 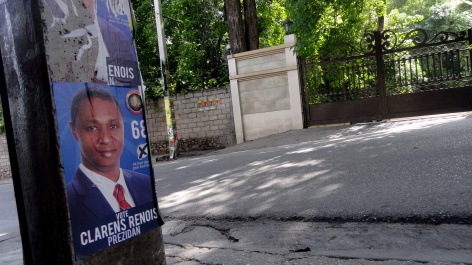 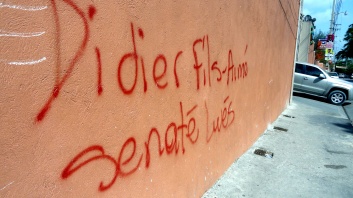 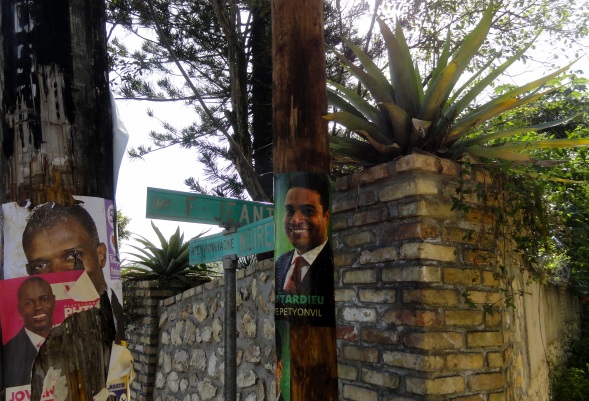 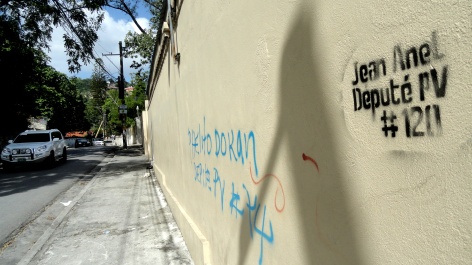 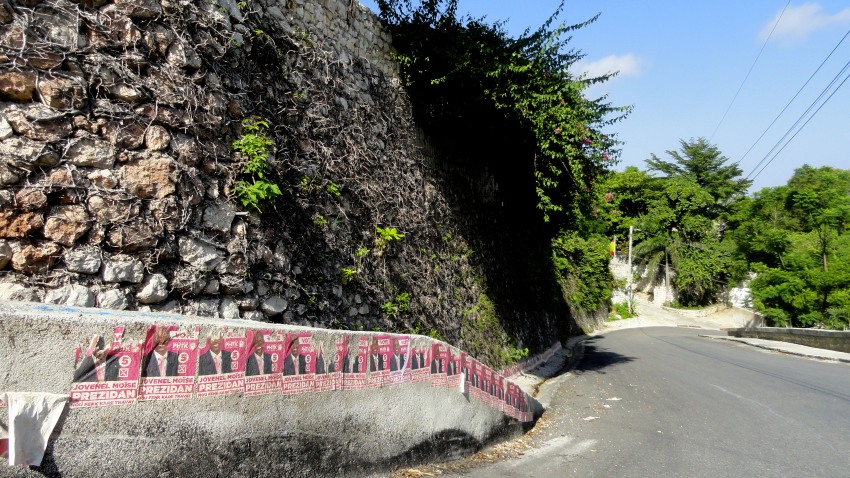 This entry was posted on October 23, 2015 by somuchworldsolittletime. It was filed under Haiti, Port-au-Prince and was tagged with Delmas, haiti campaign graffiti, haiti campaign posters, haiti elections, haiti history, Petion-Ville, port au prince.