For a lot of reasons, I tend to hide the personal me on this blog – focusing instead on the remarkable people I’ve worked with & places I’ve been. The personal me is by nature a fairly private individual, even if I occasionally manage public coherence when speaking about my work experiences. With this post, I’m making exceptions to a few of my usual rules: I’m taking photos out of order, so as to include photos taken this very morning (rather than continuing to work my way forward from late May, when I took those last photos I posted from Beacon, NY)…and it’s more than usually about me and the community I’ve called home since 2014.

The place I call home is Santa Rosa: county seat and geographic heart of Sonoma County, a lovely small city nestled between mountain ranges, surrounded by parks (state, city and county), blessed with farmers who plant and grow the most delicious fruits and vegetables and bring them to us at year-round farmer’s markets, with vineyards that produce fantastic wines, with so many breweries & brewpubs that it’s an embarrassment of riches. We’re blessed with bike paths, with urban planners who let the traffic lights notice the small profile of a biker as well as the larger profile of a car…meaning I can make a left turn without having to get off my bike and press for the walk signal at most intersections.

…look closely in the  photo above and you will see some blackened patches, not far from roofs of houses built up against the edge of the park on the lower slopes of those hills. I’ve had camera trouble (an SD card went haywire) so I had to re-do these photos with the wrong light and I can’t get back out there again soon when the light’s better…so, sorry for the lower quality of today’s photos.

Here in Santa Rosa I’ve been able to hop on my bike, take to the hills and work through whatever stress and sadness have accumulated through the work I do. I’ve grown accustomed to working in places which are in the headlines – a year ago, I was living in Port au Prince when hurricane Matthew struck; just two months ago, I was in Sierra Leone when a landslide & flood killed hundreds in an instant. I had not thought to have friends texting and writing to ask if I was safe at my home in Santa Rosa – but that’s what happened, Monday the 9th of October as I sat with my mother in a doctor’s office on the other side of the continent. First, friends called to ask if they could offer my apartment (empty, since I was away helping my mother with some medical challenges) to people suddenly evacuated because of the literal fire storm which with shocking speed consumed homes, lives, hotels, and businesses overnight from late on Sunday the 8th into the 9th. Then other friends began texting, to ask whether my own home was affected. And there I was, a few thousand miles away with other commitments.

I returned home six days ago, and have been taking stock of this city & county I’m so happy to call home and pay my taxes in…since, after all, it’s those wonderful county taxes which support our wonderful firefighters and responders, I assume. I’m offering here a range of photos, all taken between late April (when I returned after the end of my assignment in Haiti) and this morning. Each photo has a file name which will tell you what it is – and usually when it is. 171027 means this morning, 2017 – 10 – 27, and so on. 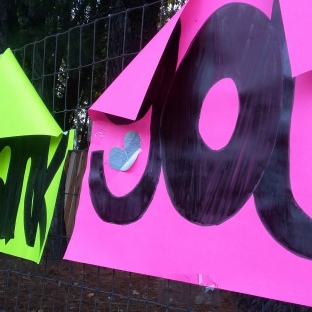 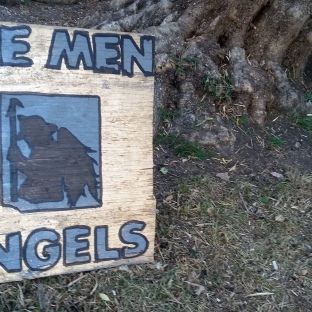 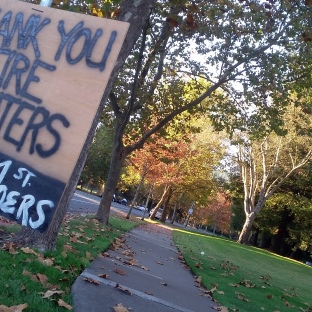 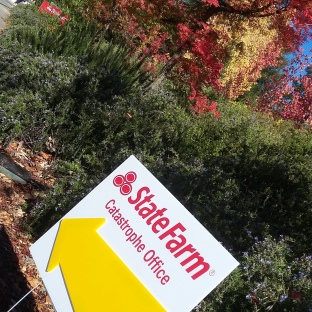 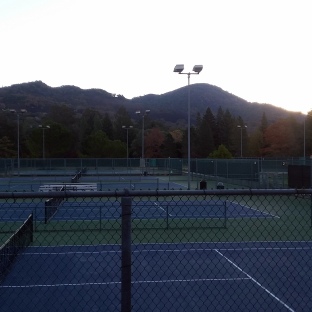 Since I have reading friends and followers around the world, let me explain a bit: California (especially the coastal parts, but really most of the state) gets all of its (limited) rain in the months from October to April. Usually it’s really November to March. Our plant and animal communities – from the famous redwood trees to our mountain lions and California poppies – have evolved around these extremes of wet and dry, with fire as a critical part of the ecostystem. Redwoods, I believe, thrive on flash fires – which clear away their competition in rapid brush fires which they can easily survive. Caveat: I’m not an expert on this stuff, but am trying to remember what I’ve read in park signs and articles. I’m quite certain that fire has been part of the native ecosystems here since long before even the first Native Americans arrived in what’s now Sonoma County – let alone before the first Europeans interlopers arrived just a handful of centuries ago, when most redwoods still standing were already mature.

The first photo in this post was taken in Annadel State Park in late April – at the end of the wettest rainy season we’ve seen in many years. Of course, that rain meant we had lots of new growth this year. And of course, we had our usual dry season which led to the brown hills with dusty green of scrub oaks and lots of dry new growth, which you’ll see in other posts. Look closely at the photo just below, and you’ll see how the grass burned on the hills of Annadel just above a city park where I often play tennis. It’s fairly common for parks to burn, this late in the dry season. It’s not at all common for a firestorm to erupt and spread so very rapidly under heavy winds. Friends who were here at the time, and who were evacuated, tell stories of going to bed aware of heavy winds, waking up to the sound of neighbors knocking on doors and/or loading their cars with family and pets then driving off, at 3 in the morning. I do not have the heart to show the destruction to property and homes: those photos are already out there, and for me to pile on feels disrespectful to the  members of my adopted community who have lost so much. I am worried about one of my favorite farmers, who grows in the northern part of Santa Rosa where the first fires were at their most intense. (It’s her produce you see in one of the photo galleries further down – from figs to aubergine/eggplant and peppers.) I hope when I next make it to the farmer’s market, I’ll learn that she and her farm and family are all OK. 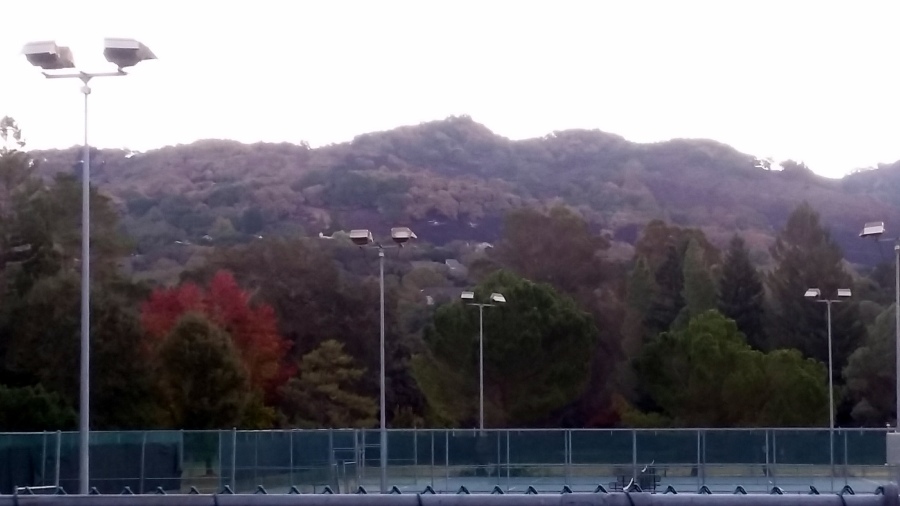 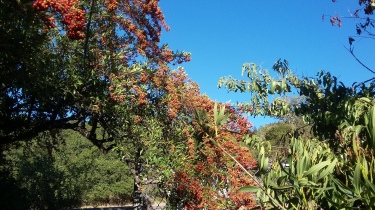 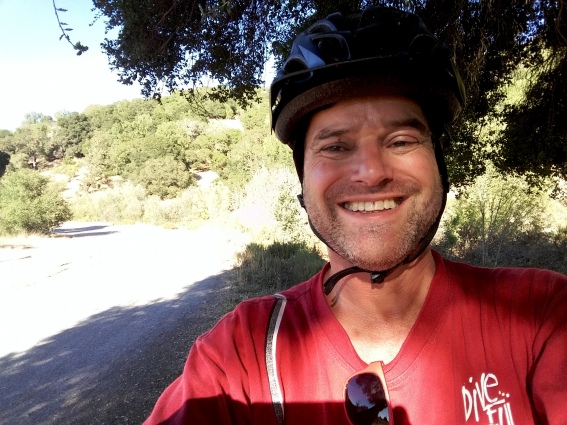 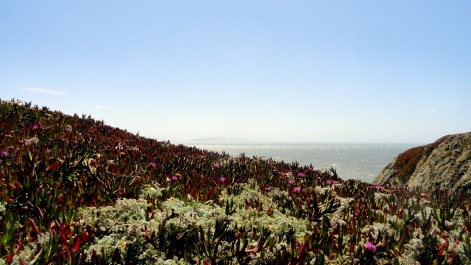 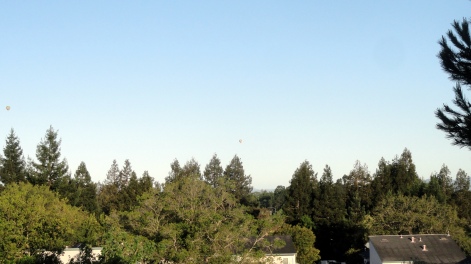 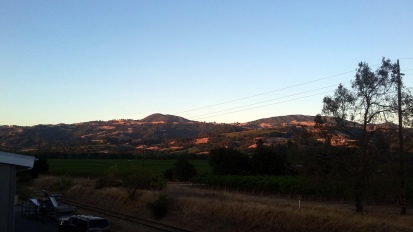 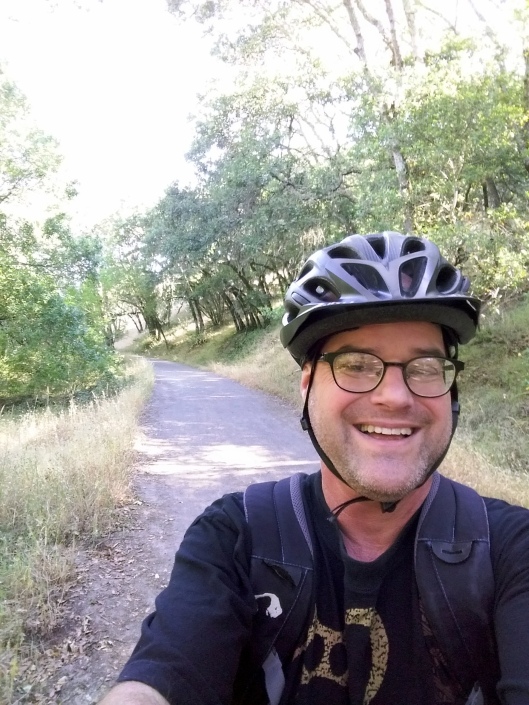 This is already a longer post than usual – and as you see, I’m throwing in a range of photos I’ve taken throughout  Sonoma County since returning from Haiti in April. Why? I’ve been fearful about the health of people I love, from my mother to friends here in Santa Rosa, to a dear family friend who passed away last month. And I’ve certainly been fearful for the homes and lives of my community here – including my own home, which has remained untouched (knock wood) but was much too close for comfort. 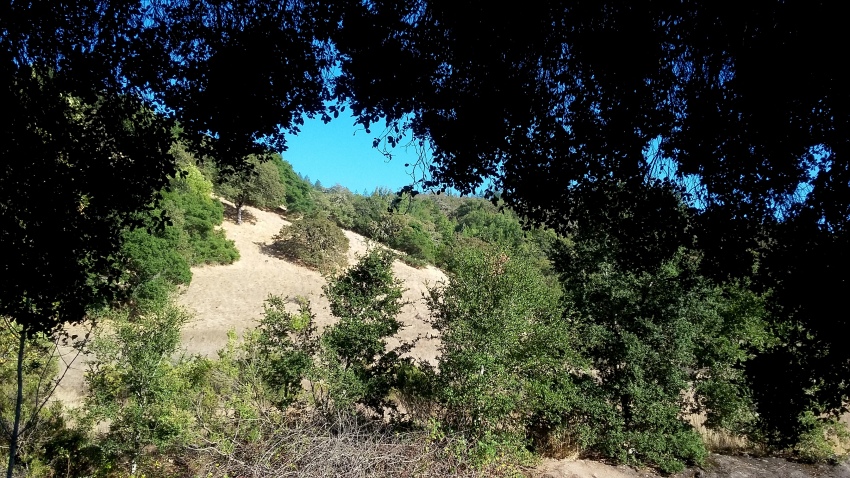 At the same time I have been heartened, as always, by the magnificence of fall foliage both on the east coast (New York, New Jersey) and here in Santa Rosa. By the enduring refuge of nature and the cycles of our planet which so greatly outstrips my own small life and experience. I take comfort from understanding myself as one transient element of a planet and a universe I find beautiful and enduring, and which I hope future generations will enjoy long after my own molecules have reassembled elsewhere. I also remember that at most times, even in places affected by great crisis, most people are doing their best to get on with life, feeding their kids and wiping their noses.

A thing I’ve loved about Santa Rosa & Sonoma county since first introducing myself here is how warm and friendly people are. This is reflected, I think, in the fact that I see signs everywhere thanking our first responders: the fire, police, emergency-response and support professionals who have deployed from communities near and far to limit damage, hold fires back from property and lives as much as possible, and help everyone react and adjust as well as we all can. I interpret this not only as gratitude that they’ve helped save so much, but also as refusal to give in to fear, insistence on seeing hope and opportunity rather than only loss or worry. These are, in the end, individual choices each of us must make: live in fear or live in hope? My favorite park is closed until further notice – but I’ve learned again how many of us love that park (see the sign with heart saying we love Anndell, noted on a fence not far from me). Being redirected to other bike paths and parts of town also helps me see and learn anew – for example, that our city has provided a fly-casting pond  where folks walk their dogs and practice their fly-casting techniques for their next trip to the trout streams. So, despite a worried heart about people at risk or dealing with loss, both near and far…I find faith that the sun will rise again tomorrow, that we’ll find our way through these difficult patches, and that somehow we’ll rebuild and restore balance and harmony, first in our community and then, perhaps, elsewhere on a fractious globe. Peace, out. 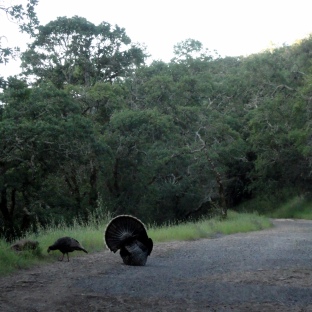 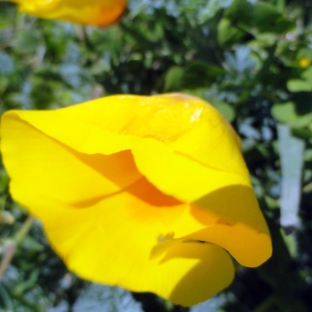 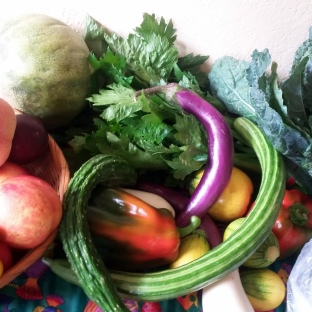