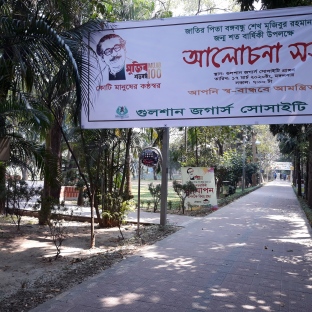 So here in Bangladesh, it’s already the 17th, which makes it the 100th anniversary of the birth of Sheikh Mujibur Rahman. He’s the man who — as head of government in what was then East Pakistan — in 1971 declared the independence of Bangladesh. Thus he’s called the father of the nation, and this anniversary is an important celebration here today: muted due to the current context, but still important.

This entry was posted on March 16, 2020 by somuchworldsolittletime. It was filed under Bangladesh and was tagged with Dhaka, Sheikh Mujibur Rahman.