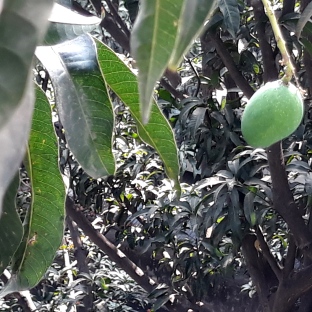 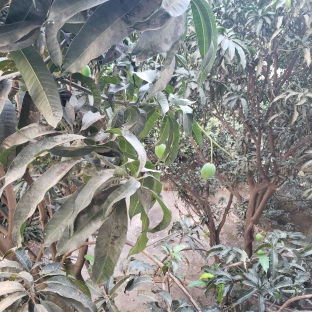 I’ve read that the mango is the world’s most popular fruit. Children who grew up when I did, in the temperate regions of North America or – I presume – Europe were unaware of this reality, since mango trees did not flourish near us. Instead, the staple fruit was the noble apple, with sometimes a special summertime peach. Shortly after turning 21, I flew from North America to Taiwan for a year of studying Chinese there. In Taiwan, my fellow foreign exchange students and I flocked to the many stores that sold mu-gua 木瓜 or mang-guo芒果 bing 冰 or niu-nai牛奶 : translated as papaya or mango, milk or ice. In other words, milkshakes with mango or papaya, or slices of papaya or mango on a plate with shaved ice. I was a committed mango-ice man, myself. (Sorry, can’t figure out how to do my own input b/c technology has changed since I last lived in China, so I had to go with the simplified character lookups even though, well, as we all know, for Taiwan that wouldn’t be right…but I’ve never agreed with Bopomofo, so there you have it.)

I did not learn, then, to recognize a mango tree when I saw one – that came much later, when I lived and worked for a time in Sri Lanka. (There was, at least then, a place on the main road from Colombo up to Dambulla where the road passes through a wonderful row of mango trees on both sides.) Since then, I’ve worked in many places where mangoes grow naturally. Often, in places where they fall onto the tin roofs nearby or even overhead, causing jumpy behavior because, well, unexpected loud things that go bang, don’tcha know… In PNG, I decided it should be declared a crime against humanity to leave fallen mangoes to rot in the gutter, but that wasn’t an argument I won. Still, I boosted my intake of vitamins and minerals though many a … fallen mango, as it were. 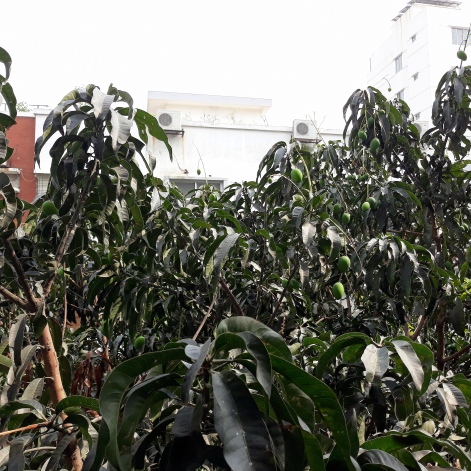 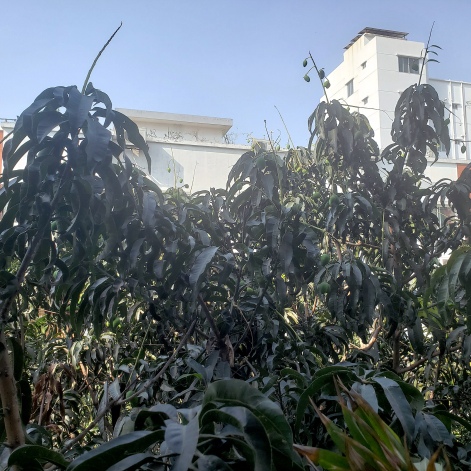 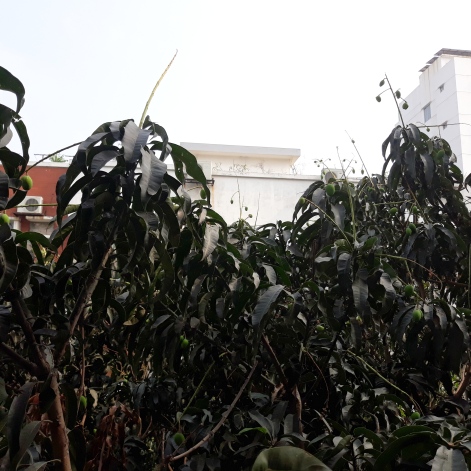 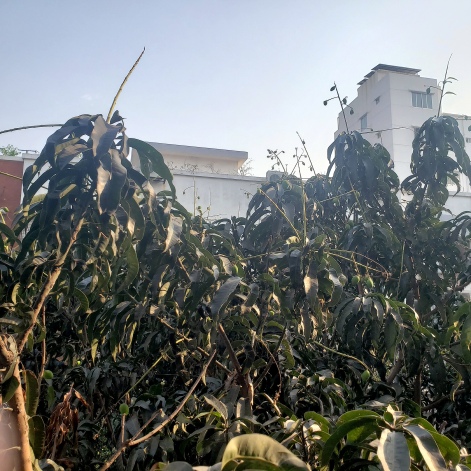 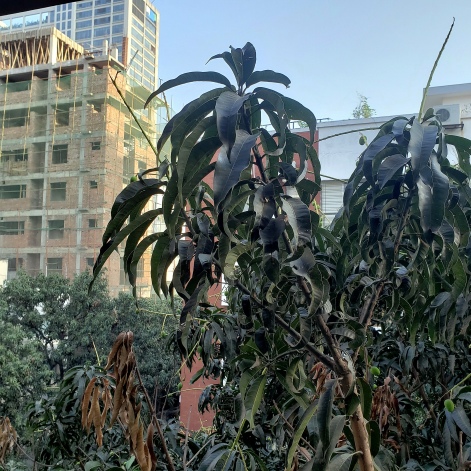 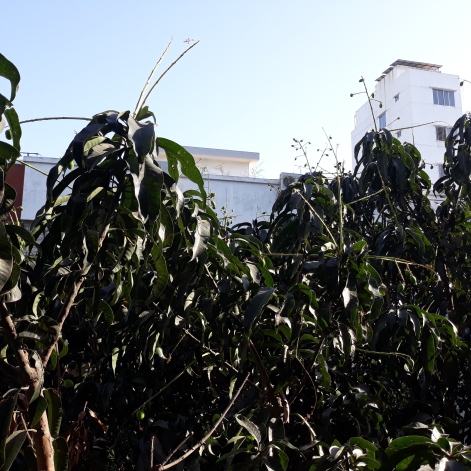 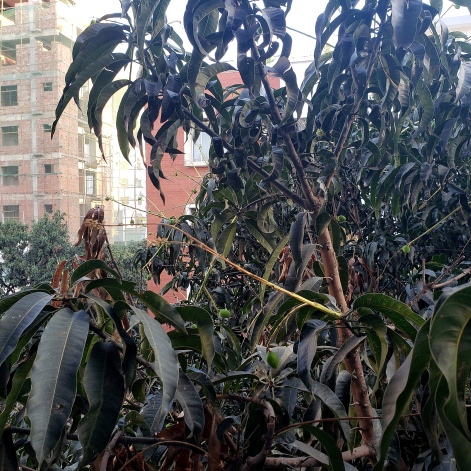 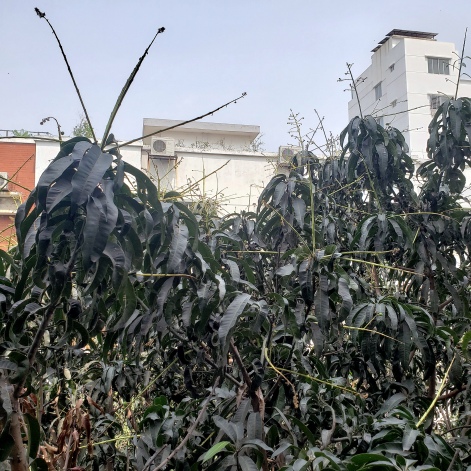 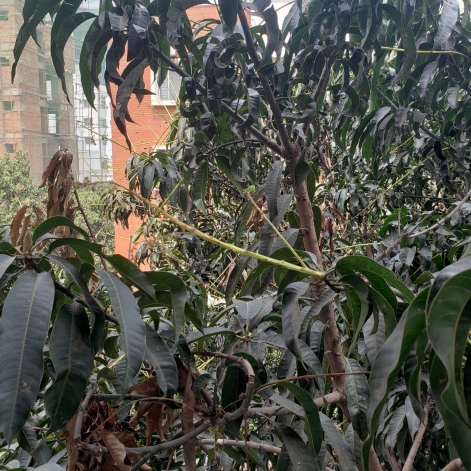 So when I took up residence in my current apartment, I was delighted to note a mango tree just outside my kitchen window. Then we started working from home, and I thought “what photos will I put on the blog once I use up the last photos I took in Sonoma County during February?” Herewith one answer: the first in an installment of watching-the-mango-grow posts that I will share with you. Do I know this is pathetic? Yes, I do. But aren’t we all seeking ways to motivate ourselves, each day, in … ” these unusual and unprecedented times?”  🙂 In the larger gallery with two columns below, you can see the size and placement of the growing mangoes as of April 15. Scan downward and you will see photos from pretty much the same location and angle, going back to March 21 for the first photos. My photos became more regular after March 29 — the first non-weekend-or-regular-holiday-day when I woke up knowing I wouldn’t be going in to the office. (Hint: at the top of the left-hand column, there’s a bunch of four mangoes which have weighed the branch down so by now, it’s less visible against the leaves – if you click on the individual photos, you can see those a bit larger, and in the oldest shots just above here, you will see them when the mangoes were smaller and hadn’t yet bent that branch over. I’m wondering how many will fall off before fully ripening, myself…)

If I manage, I should keep taking photos nearly every day until all the mangoes have fallen off the tree. I’m sorry I didn’t think of this while the spiky flowers were still in bloom – but in the March photos jut above here, you’ll get a sense what the flowers looked like, before they were pollinated and started becoming fruit.

This entry was posted on April 17, 2020 by somuchworldsolittletime. It was filed under Bangladesh and was tagged with Dhaka, Mango Trees.