…And other wonders both structural and natural. In past visits to Sydney I’ve amply represented the harbor bridge and devoted substantial space to the magnificent Opera House, which you can barely make out behind a buoy in the shot above. This time I decided to do something of an homage to Hokusai and show my own set of views of the bridge, which really is huge and pops up suddenly from any number of different angles and parts of town. These are the last shots from the recent Australian dive-and-city vacation – unless I decide to dig through the underwater out-takes and pop up the director’s-cut extra features, maybe a few of the shots I was sad to leave out but omitted b/c of worry that the entry was already too big. Feel free to weigh in on that question: to post or not to post more of those underwater shots. Don’t bother being kind, either. 🙂 Hope you enjoy these. It’s back to work now in POM for several weeks til I head back for some meetings in Europe. Cheers.

Coogee Beach panorama, above; and I just loved this insignia on the horse barracks near where Trudi lives. Thanks for being such a great host, Trudes!

There’s beautiful ironwork, and highly structural blossoms, everywhere one looks in Sydney. The ironwork and stonework has always been something I love about Sydney – it’s not just the bridge; if you look closely enough, it’s everywhere. And the blossoms are sooooo structural! 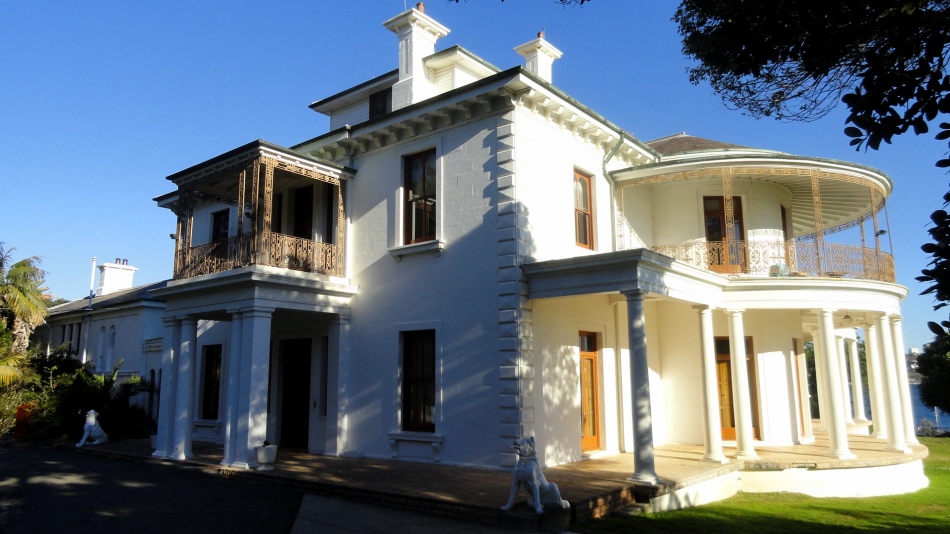 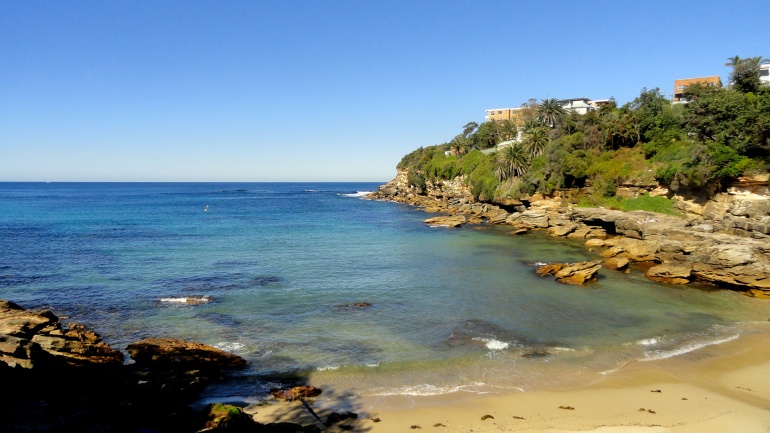 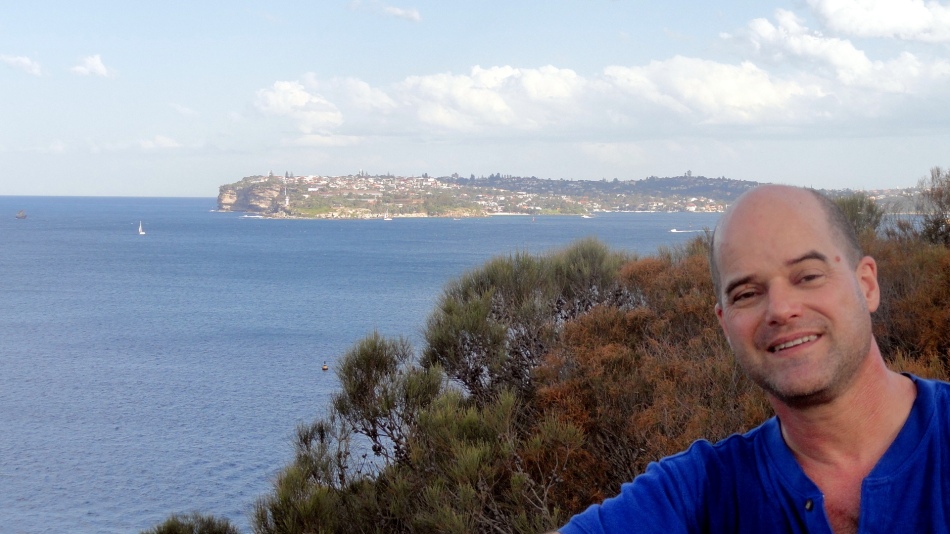 That’s South Head and Watson’s Bay behind me. Above is a lovely old house I found on a walk around Vaucluse, very much not my kind of neighborhood (much, much too BelAir or Sutton Place for my taste), but which has a lovely walk path along the harbor between it and Rose Bay which I’d not previously discovered. 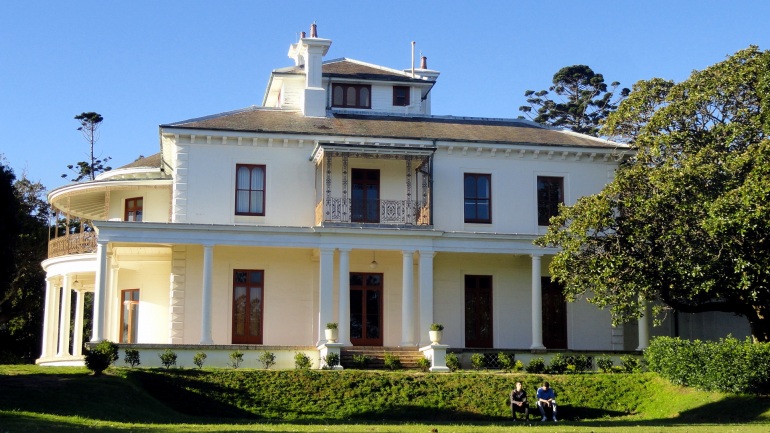 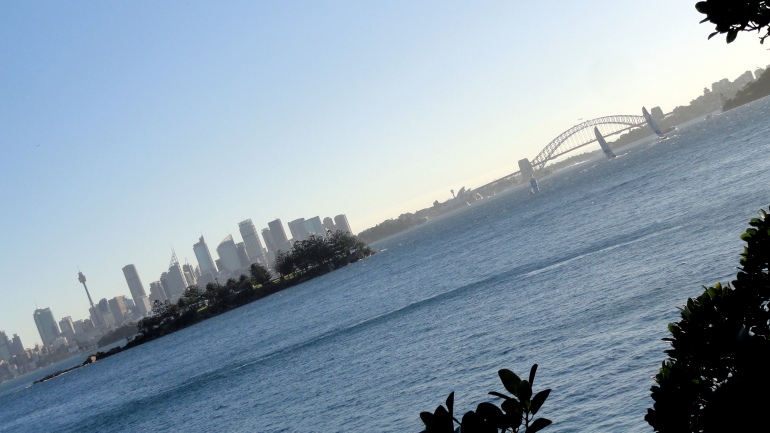 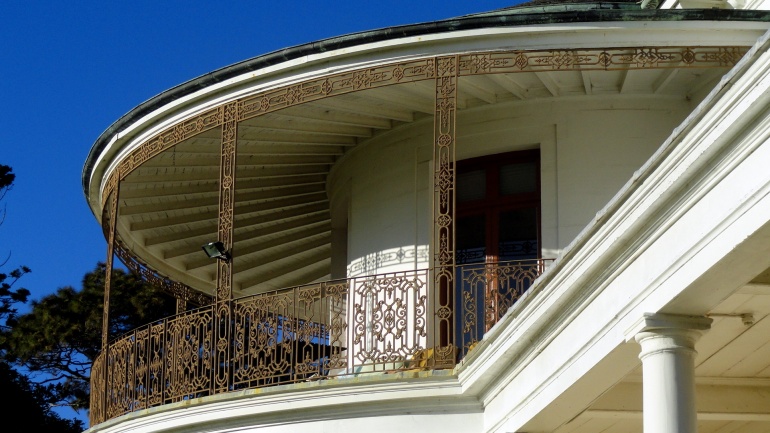 Bondi, above. Rose Bay and the CBD, an Australian abbreviation that means downtown, below.

Panorama of Manley and both North Head and South Head below….and then a few shots further below another shot looking across Manly Cove at the thin strip of Manly town before you hit the open ocean just the other side – if you look closely you can see it. That’s the north side of Sydney Harbor. 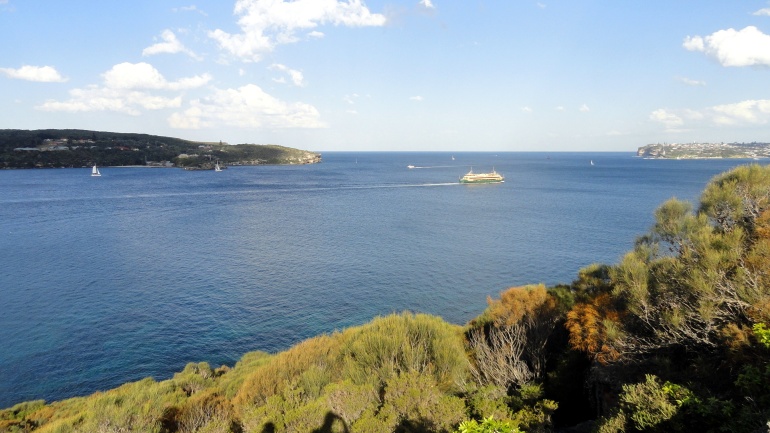 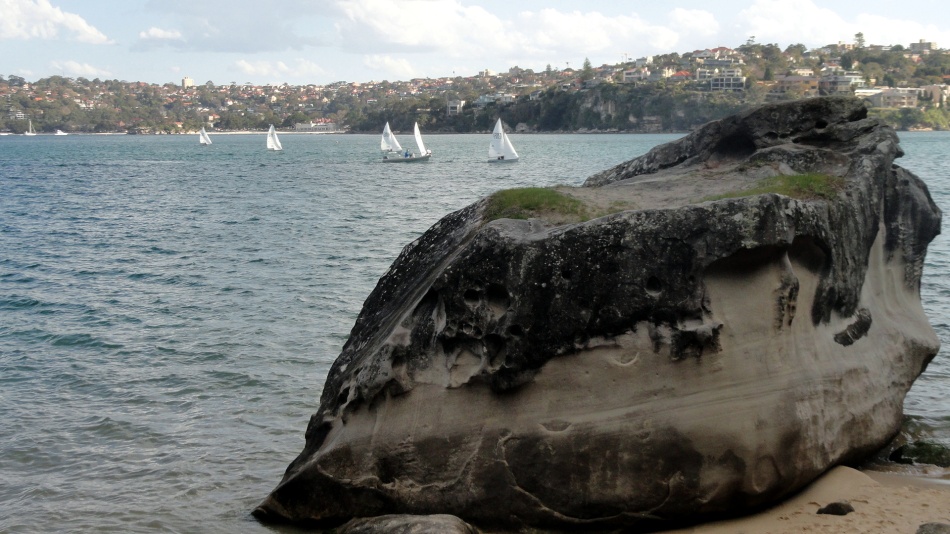 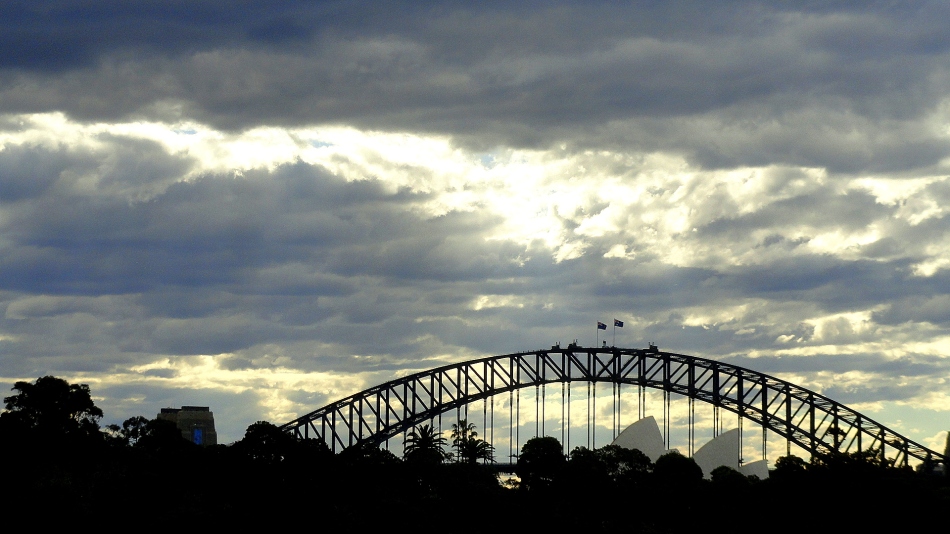 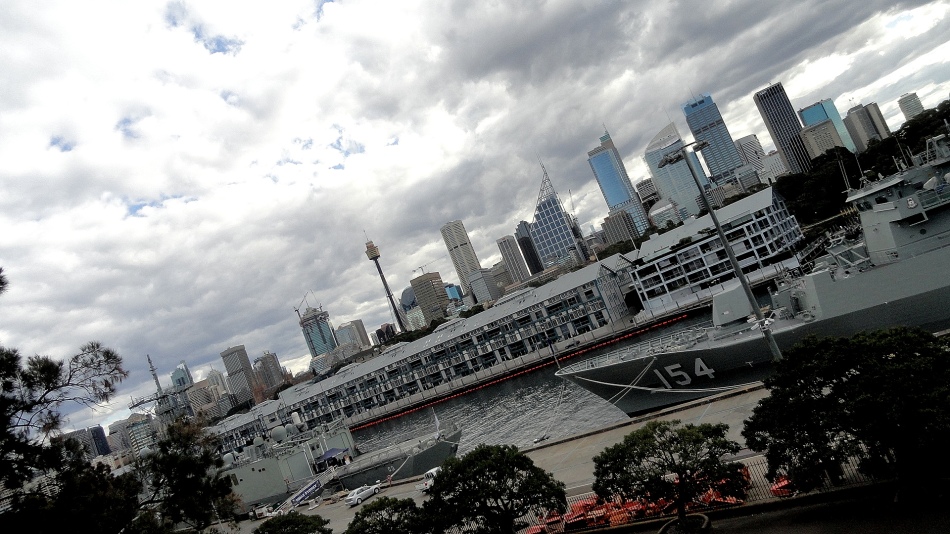 smw, slt has returned from a magnificent two-week vacation in Australia. The focus of this vacation was the Northern Territory and specifically Kakadu National Park. But since getting into and out of Port Moresby usually requires many connections and long waits in various airports, I chose to break up the trip by stopping in Sydney for a bit on the way in — where I took nearly all the shots in this particular post. In the floral section, below (yes, this blog post has different theme groups just so you can see I’m trying to keep it interesting and show a wee bit of editorial intervention…), you will see a few that were taken in Kakadu and one that was taken in Litchfield National Park…where, as Gene succinctly put it, we spent 1-1/2 hours on our way via Katherine Gorge (4 hours) to Kakadu. Where we spent four days. And could easily have spent another few without feeling bored, from my perspective. But it was a magnificent vacation, a great way to spend my birthday, and I am well  rested and delighted to be back with my colleagues here in POM this Sunday evening, with what will no doubt be a full work week ahead of me. (The work inbox, which has now been turned on, is at about 133 emails I believe – actually not a bad toll for 15 nights away from my station!) Happy end o’ northern summer to those of you in the northern hemisphere – and hope you enjoy these.

Above and in the following set of photos you see either Cockatoo Island in Sydney Harbor, or in some cases art installations, or the effects of art installations in the case of the mist on a clear sunny day above, at the Sydney Biennale. The Biennale is a fantastic large art show that takes place in many venues around the city, but with a major focus on this island well west of the main city, which over its post-European-arrival lifetime has hosted a prison and shipworks, and is now publicly held and open for tourism (great lodgings there, but not very easy access to restaurants etc.)…and, as you’ll see at the bottom, perhaps the best-located tennis courts I’ve seen. I’d have loved to play there.

You will notice that it was a day of bright sunlight and even though I arrived early, many shots were taken with bright mid-day sun so I just decided to go with the sharp-edged shadow look and try my own hand at a wee bit of artistic expression here and there. Hope you enjoy. 🙂 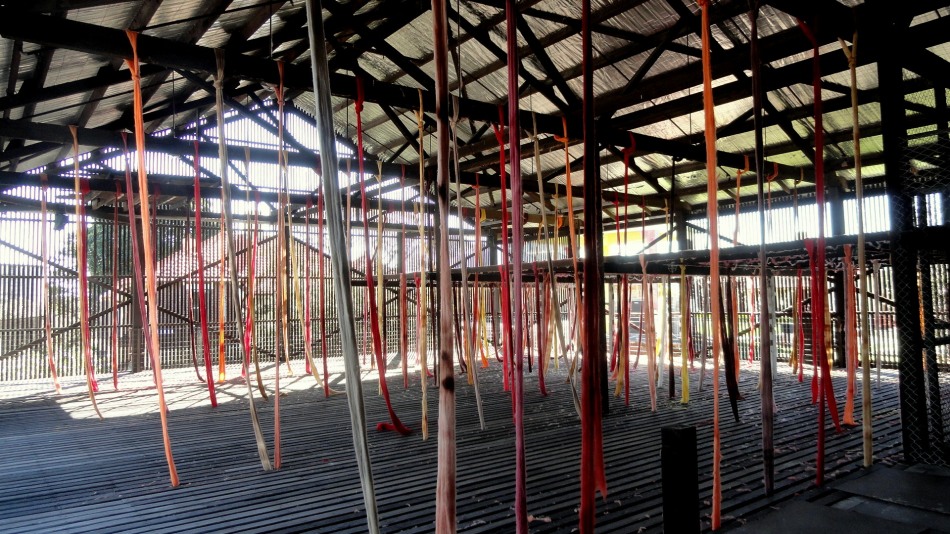 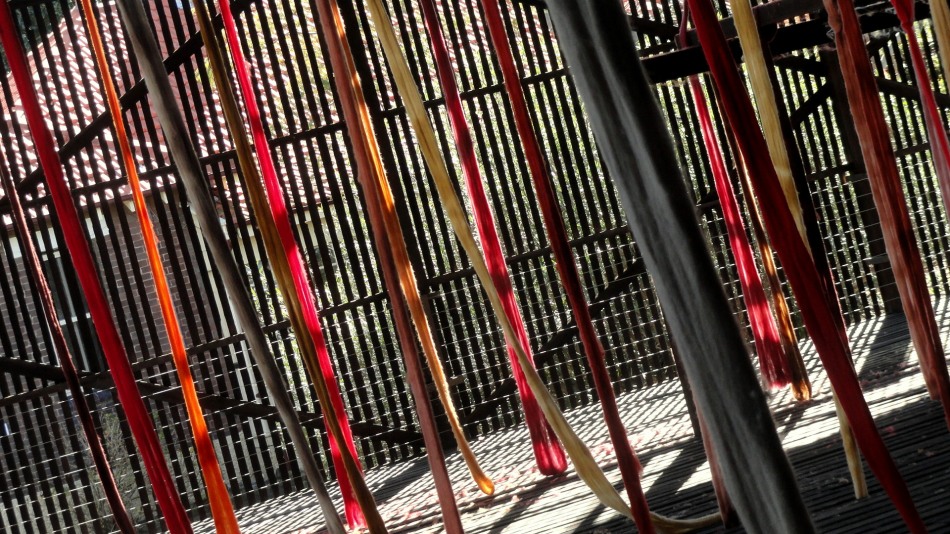 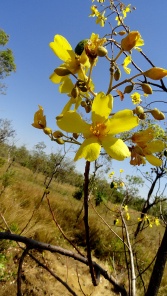 These yellow flowers appeared in every part of Kakadu where we traveled, so they are a teaser of the Kakadu photos that you’ll be able to see a bit later. We heard many times how they’re an important season indicator for aboriginal or traditional landownders — when they are blossoming is when the freshwater crocodiles have laid their eggs and people can go to the sandy riverbanks to dig for eggs.

The shot immediately below shows the flowers in situ, at Ubirr in the north of Kakadu. There are many, many more shots of Kakadu to come – it was amazing. But I like to go about things in an orderly manner… 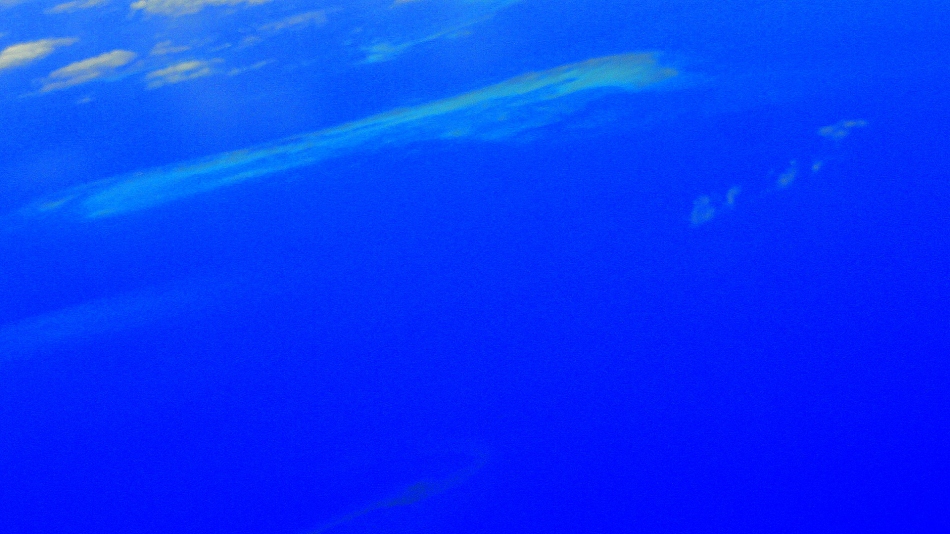 Having shown you my “artsy” cluster of photos and displayed yet again my fondness for flower photography, I will now show you what magnificent views I had from the window of my inbound flights on this vacation – first over the islands and reefs of the Coral Sea, above and two below (this is all basically in the area of the Barrier Reef), then of  the coast just south of Sydney airport — I started the entry today with my favorite shot from my inbound flight. Then…well, who doesn’t love the Sydney Opera House? Perhaps I’ve overdone it, I’ll readily admit…but I do find it endlessly interesting from all angles and in all weathers. Close second is the harbor bridge, and just the Sydney harbor generally which I really do think is lovely. Hope you enjoy. Cheers til next entry… 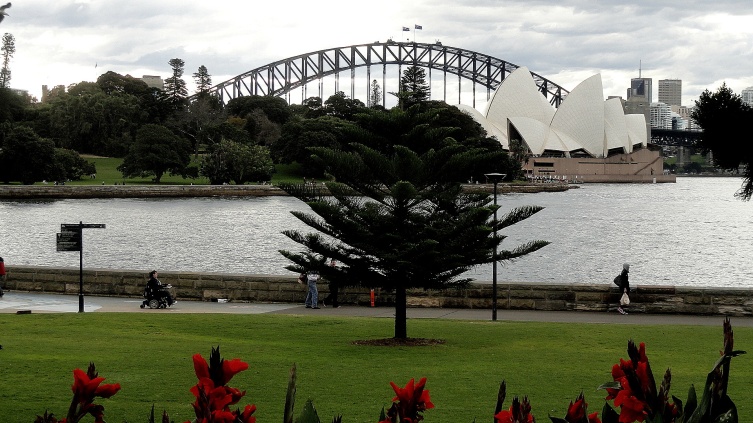 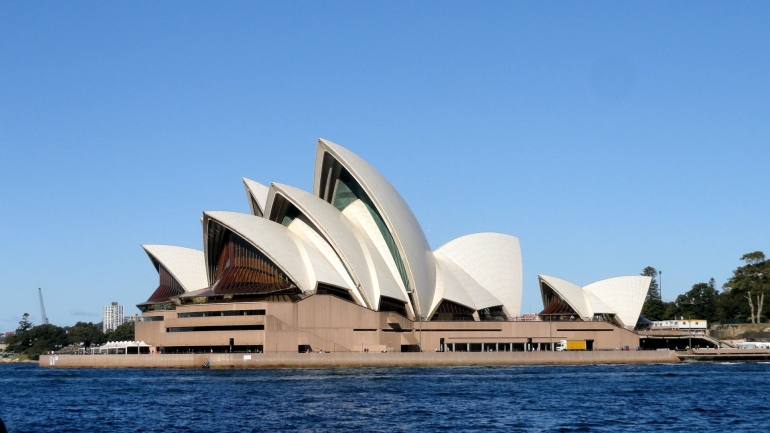 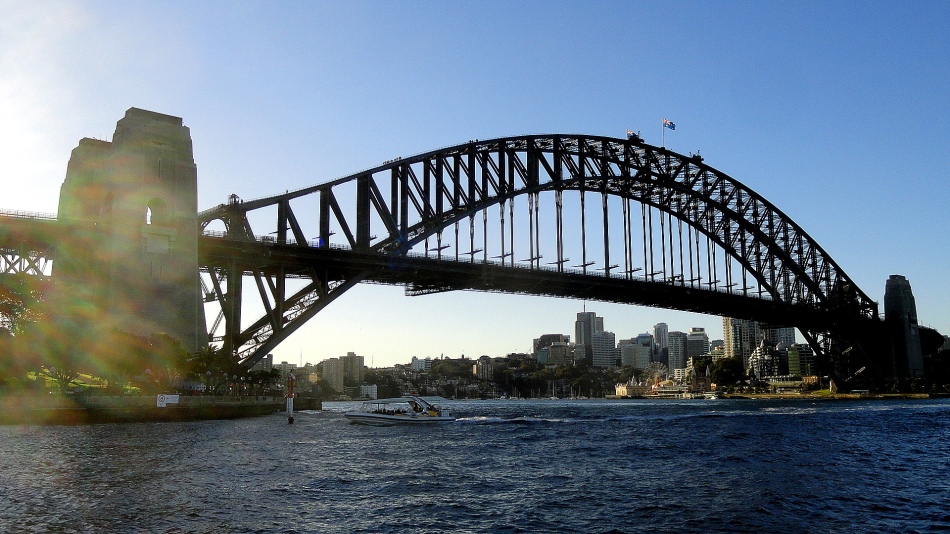 It’s frightfully early Sunday morning, 1st February, in Melbourne. The worst of this week’s heat wave seems to have passed, and coming back from the tennis this evening it was actually rather pleasant. I’ve been traveling again for more than a month now; a month that, as always when one’s having tons of new experiences all the time, and regularly seeing new places, learning new things, and meeting new people, has passed far faster than seems really possible. I know full well that, before I even really know it, I’ll be back at what’s become my regular life in the US. During my absence, the US has undergone further change — we’ve ushered in a new president, ushered out probably the most destructive president we’ve ever had as well as a frightfully corrupt major-state governor, lost many thousands more jobs, and entered a new year.

All I have to offer, for now, are some photos of Sydney, where I spent several days in early January with my good friend and former Nigeria colleague Trudi. She’s with me here in Melbourne now for the finals of the Australian Open; about that, about politics and my thoughts on Australian flora, fauna, history, culture and landscapes — more later. For now, no thoughts to offer other than thanks for staying tuned, and I hope to show you more of Australia — Western Australia, Victoria’s coastline, Melbourne — soon enough. 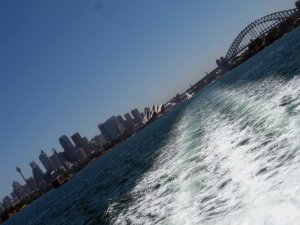 …Trudi went a little shutter-happy on our boat trip to Taronga Zoo from Circular Quay in downtown Sydney, and I’ve saved some of the better or sillier shots of me with the famous Opera House and Harbor Bridge in the background. Also above and below are shots of the skyline as seen from Lady’s Bay east of downtown, views of the South Head lighthouse (at the south entrance to Sydney Harbor aka, I believe, Port Jackson), and of North Head seen from South Head; and views of the Pittwater and me flexing what might pass for something vaguely six-pack-ish, at Palm Beach on the ocean side of the peninsula that creates that Pittwater. (Oh, look it up on google maps if you need to — north of Sydney.) Love you, mean it. 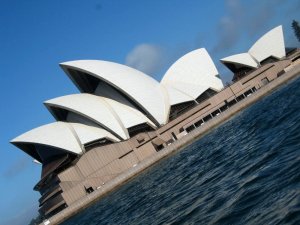 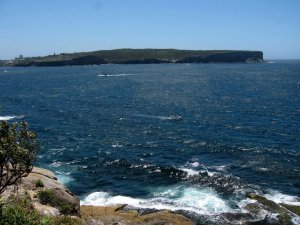 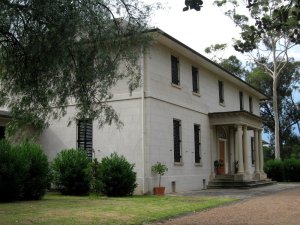 …oh yeah, and the old Government House (read: governor’s mansion) in Paramatta, inland or upriver from the main part of Sydney Harbor a bit — important for early Australian colonial history because the land there was more fertile and allowed the colonial settlements to become more self-sufficient and less reliant on boatloads of supplies from Britain. Australian colonial/european history is short, even compared to American colonial/european history — this first main residence of the colonial governor was only built around the first decade of the 1800s, I think. Lovely little house, though. 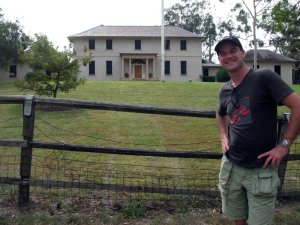