Federation Square is the recently-created center of Melbourne, home to the Ian Potter Center which houses the Australian portion of the National Gallery of Victoria — Aboriginal and European-tradition art by artists from or tied to this continent. There’s an enormous public space there where crowds hang out to watch live concerts, cultural events, and so on. During the Austrlian Open, matches were displayed live on a big screen during the afternoon hours to anyone who wanted to enjoy the crowd and the square despite the hot sun, and then in the evenings a live concert came on. The square was packed on Austrtalia Day with folks there both for the Australia Day fireworks over the Yarra River and the concerts on the public stage, and for the tennis matches broadcast before hand. Herewith some shots of the town, the stands, and some of the proud Aussies who took it all in. (The adorable and friendly guy below moved here recently from Margaret River – see above — to play rugby with the melbourne Storm rugby team. As I see it, he alone is more than sufficient reason to start watching the Melbourne Storm!)

In honor of my long Australia-Day weekend in Melbourne, the nation’s first capital (albeit provisional and temporary since Canberra was already planned, and delicately situated in between Sydney and Melbourne, both then and now rivals for top-dog status among Australia’s cities), I give you sights of the riverfront of this cultured, lovely and very enjoyable city which hosts more leading sports venues than one would imagine, and more adorably Aussie-proud sports fans per capita than even Boston can boast, most likely. 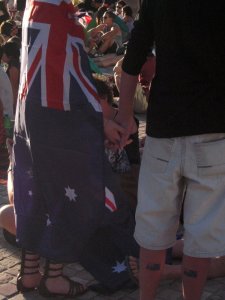 …I couldn’t help feeling it would be tacky if lots of Americans paraded our flag quite so boldly on July 4, but then we’re about 10-1/2 times the population of Australia and cast a bigger shadow economically and militarily, though ever since Vietnam they’ve shown a remarkable willingness to go along with out crazy foreign-intervention and regime-change fantasies. Somehow, it being Australia, it seems rather quaint and sweet to me. I doubt the Papuans and Indonesians would feel quite that way, but what do I know…

Melbourne started in a rather Manhattan-esque attempted land swindle around 1800, not long after the first fleet sailed into Port Jackson on January 26, 1788. (Yes, I celebrated Australia Day precisely 220 years after those first convict settlers landed on the shores of what is now Sydney to try eking out an existence under a different sun and different stars, with an ecosystem more radically different than that of the Europe they knew than they even began to understand until the late 20th Century.) Anyhoo, this guy named Batman (I’m not kidding) gave a few trinkets to some Aboriginals whose ancestors had done a great job of living with and on this land for many milennia, and figured that meant he’d somehow ‘bought’ the land from them — just like that old Chestnut about Manhattan island. And like that, Mr Batman was deluded because under English law, only royal agents could negotiate for land, and the Aboriginal inhabitants, rather understandably, didn’t see how a human could claim to ‘own’ a piece of land which would still be around long after we’ve returned to dust… Still and all, it’s from those roots that today’s gleaming skyscrapers of the modern Melbourne with its Batman Avenue sprang. Like California and Alaska, Melbourne and the newly-organized independent colony of Victoria (it was all New South Wales, at the start, but Melbournians quickly realized they were cooler and more cultured than those Sydney-siders, I guess) grew by leaps and bounds after gold was discovered nearby, and for the latter half o the 19th Century Melbourne was much bigger in population and, I deduce, relative weight within the colonies, than Sydney. Today they’re rather comparable, with Sydney a bit bigger in population and housing the more business, while Melbourne is undisputed sport and culture capital, so I understand. 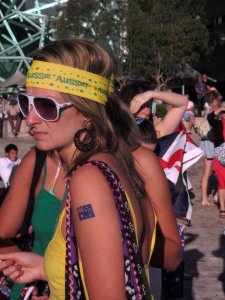 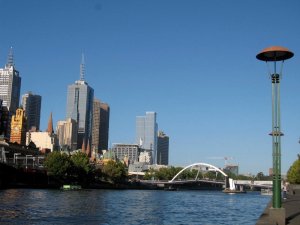 Despite many similarities between the European arrival in North America and the one in Australia, one is constantly reminded here that one is very definitely NOT in Kansas, or even California, any more. Reasonably educated, cultured and even multilingual Americans (such as yours truly) often need decoders to get by in the land of Oz. To whit, from my excellent Western Australia road atlas and guidebook: “One of the most photogenic of the all the region’s mammals, the chuditch was once persecuted as a raider of chook pens.” This sentence clearly reads as English, but if I didn’t know better I might think it came from the creative mind of a fantasy or sci-fi writer, so little sense does it make to any non-Australian, perhaps even to many Australians. the chuditch is just an indigenous species here, unique to this continent which departed the super-continental mothership much earlier than most of the other continents…except, of course Antartica, which ain’t so known for its land-based flora and fauna. ‘Chook,’ on the other hand, fits into that lovely category ‘Australian Shorthand’ into which also fit such items as Brekky (you can buy, I kid you not, a carton of Brekky Juice aka Orange Juice, in the supermarket here) and Arva (tea in the arvo may not be the Queen’s English, but one does meet up on Sunday Arvo here for tea). Chook? Chicken. But how am I to know that? Is it in the OED? And to think they have the nerve, here in tiny little (population-wise) Oz, to make fun of American English! True, they SOUND more couth than we…but I don’t expect I’ll bind brekky, arvo or chook in the OED when next I check.

Consider, further, my predicament three weeks ago at a local winery on lovely Cape Naturaliste (Geographe Bay and adjacent Cape Naturaliste, for the curious, were named after the two ships in the French fleet that first mapped the region): I want to order the salad with rocket, shaved parmesan and evoo. The menu also offers delicacies like kanagroo salad and other items I can’t identify — and my culinary vocabulary is not small by most definitions. When I first saw rocket on a menu in London, around the time of the US Supreme Court’s judicial coup in favor of GW Bush (thanks so much), I wondered how my teeth would handle all that metal. Then I figured out that we were not talking about the Mars lander, but about a classically English bastardization of the French ‘Roquette,’ better known to Americans as Arugula. But evoo? In a country where common animals include the quokka and the echidna, and the emu is regularly seen sharing grazing space with the cow — both destined for the barbecue grill, I think — one simply can’t know whether evoo is a small woodland creature (I imagined those fuzzy things in ‘Return of the Jedi,’ honestly I did!), or simply … extra virgin olive oil? 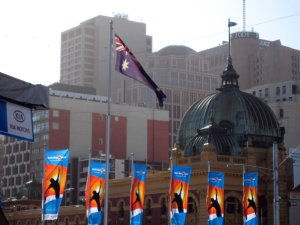 Such is often my situation here in Australia: we’re speaking the same language, but things often seem a bit reversed or off-kilter. I don’t suppose this should surprise me; my situation is not unlike that of the early British colonists to arrive here, who were surprised to find trees that didn’t shed leaves, but DID shed their bark, summer in January and winter in July. One sadness in my trip south of the equator, thus far, is that all the drains – toilets, bathtubs, sinks, you name it – are too damn good: they just suck that water right out in one big whoosh, leaving no time for a whirlpool to form. This means that I cannot yet confirm or deny rumors that, when whirlpools form here south of the equator, they run counter to the direction of northern whirlpools. Can any scientists in the audience (is there an audience?) confirm whether, somehow, the laws of physics are such that down here, whirlpools run counter-clockwise (that’s anti-clockwise to the very few Aussies in the audience) rather than clockwise, as they do in the 0ld countries? 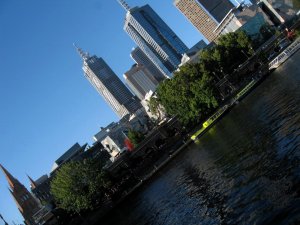 Having driven, now, roughly 800km on the roads, I can confirm that it is possible to adjust to left-side driving. My parallel parking leaves much to be desired (at home I’m so proud of being able to park well on both sides of the street; but here, the trouble is more understanding how the whole car relates to me when I’m behind the steering wheel on the right-hand side of the car. I find that ultimately, this difference is far weightier than which side of the road I’m driving on — it’s just that everything is reversed: after three days of driving, I’m now proud to say I only turn on the wind shield wipers 50% of the time, rather than 95% of the time, when I go for the turn signal. (Different side of the steering column, of course.) And when Howard and Gene – with whom I eagerly anticipate spending two glorious weeks in New Zealand next month – told me I had to rent an automatic, rather than manual, car, I inwardly sniffed; if it were up to me, my inner devil suggested, I’d save the extra cost of automatic and put it to more bottles of Canterbury Sauvignon Blanc. Thank goodness their wiser heads prevailed, and I did the same when I hired (that’s Australian for ‘rent’)this car in Perth. Even with the automatic, I am still pretty well all thumbs: my left hand and arm simply are not used to being quite that responsible. Heck, they can’t even brush me teeth, and now I’m entrusting them with my life? Possible avenue for scientific inquiry: do right-handed people growing up in left-side drive countries develop a greater level of ambidexterity than most of their counterparts in right-side drive countries? I do find it interesting how very clumsy I feel behind the wheel, though by now I’m generally confident and not so terrified of simply ending up on the wrong side of the road, flat out, as I was to begin with. 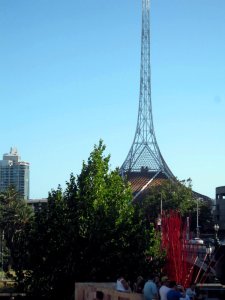 This entry was posted on February 2, 2009 by somuchworldsolittletime. It was filed under Australia, melbourne and was tagged with Australia Day, Federation Square.