March 1 is Holi, here in India. A week ago smw, slt was finishing up week+ exploration of central and southern Kerala, plus a dip into southernmost Tamil Nadu. Now we’re working to get these photos posted so that we can get back to working, holiday notwithstanding, on the presentation for our next management meeting in Delhi, to which I’ll fly tomorrow. My time in India is beginning to wind down more and more rapidly, so I’m glad I had the quiet and contemplation of these days alone to explore a corner of India I’ve long dreamed of. The texts are something new – extracts from my journals, in which I wrote a bit more avidly than I usually do even on vacation. Let me know what you think. 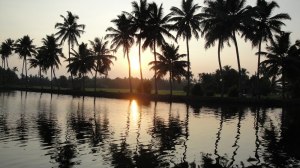 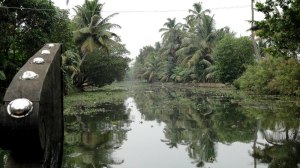 The heart of my week in Kerala was four days at a hotel then a houseboat in the backwaters, a large network of rivers and canals a bit inland from the ocean in central Kerala. One of the more peaceful times I’ve spent.

This is the backwater equivalent of the school bus.

I think this is the backwater equivalent of running the daily errands. 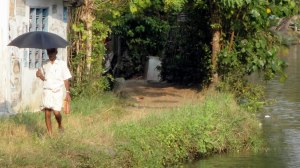 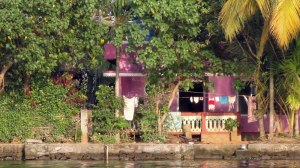 The backwaters are highway, swimming pool, bathtub, tourist attraction, supermarket for herons & egrets & cormorants, seagulls & terns and other water birds; source of income and food for thousands of fishing families…and, above all in my eyes and ears this morning, launderette. Keralan women (plus the occasional man) can be heard and seen punishing the dirt and sweat, drips and dribbles of coconut juice and chutney, grass stains and just plain dirt out of their families’ clothes up and down the length and breadth of every canal and river throughout this vast network of water. That the clothes survive the merciless slapping out of all these stains and dirt must testify to the quality fo Kerala’s spinners and weavers. Many a shirt I’ve worn would dissolve to shreds at such treatment. A woman dunks the offending garment deep under the tepid green water, pulls it out, lathers it with a bar of soap, swings it high above her head in a one-armed lasso motion, then — THWACK! — whips it down on the nearest flat rock, with the fury of one to whom cleanliness truly must be close to godliness…and who has every intention of achieving for herself and her family’s clothing, at least, both states. Lather, rinse, repeat thwack, all along the highways and byways of this watery world. 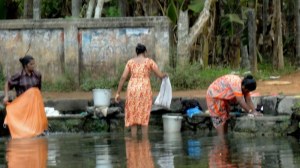 So here I am at dawn on the backwaters of Kerala, watching herons and egrets do their breakfast dives and stabs into the water. A few of the more intriguing songbirds are still calling to each other, but mostly the sounds are crows, a loudspeaker reaching across the water from a nearby temple, and the occasional horn trilling from an unseen road. (And many Indian horns do trill, multi-note melodies that go into an echo-fade thing for a few seconds – so much more Indian in ethos than the stolid northern-European, Anglo-American, single-note horns that just thrust themselves into the audioscape and then as suddenly retire. I’m called momentary to a reverie of LA’s highways packed with colorfully-decorated Indian-style vehicles, all blaring their horns in a cacaphony of receding trills…certainly more interesting than the standard-issue LA rush-hour traffic jam.) There’s the occasional electric-blue flash of wings skimming the water’s surface, which I assume is the kingfisher, so fleeting and elusive that I’ve never captured it on camera. So startlingly, dazzlingly blue in this green world that I wonder if I’ve imagined it, until it happens again. I lie on my bench seat, head turned so I can gaze out on the watery highway extending in front of the boat and listen to clothes thwack on rocks, watch white egrets & black cormorants & the occasional electric-blue kingfisher feast on the fish smorgasbord beneath me. 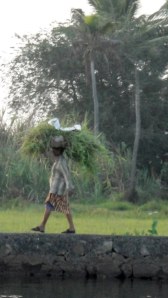 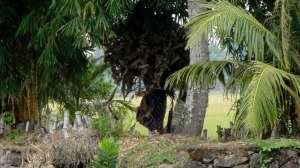 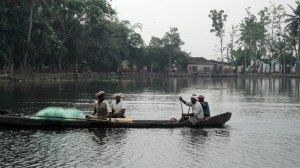 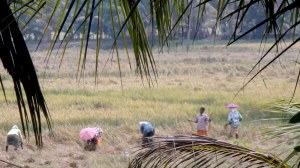 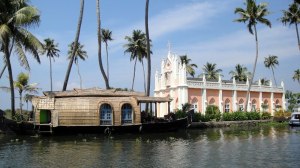 My brother (one of them) informs me that, in removing myself from the shores of my native land, by placing myself in this self-imposed virtual exile where the world is my oyster but no place is my home, I have reduced my odds of ever meeting Mr Right to 0:0. His logic is well-presented: hard to date anyone local since I’ll always be leaving at some point, plus there are usually reporting relationships and work complications, and meeting Joe Citizen can be a real challenge most of the time anyway, at least in a neutral non-work way…after all, I kind of stand out as one of a dozen or so foreigners in the entire state. Then there’s the fact that most of the places I work now have cultures that tend, to a greater or lesser extent, to be even more opposed than my southern-Ohio birthplace to the queer manner in which my search for affection expresses itself.

It’s true that five years of doing this work have led me nowhere romantically, though the stories I can now tell when back in places where I blend in a bit better do seem to gain me more attention at parties and among those types I tend to admire most, than my suit & tie business self used to. However, I did make a decision after eight years of equally sparse success in the malls, dance clubs and tennis courts of LA and SF, that hunting the ideal mate there was rather like a seeking a tropical fish on dry land: the people drawn to the shopping malls and nightclubs of the world are birds of a different feather than me. So now I at least do work that interests and truly challenges me, in new ways and different ways that I hope do more than contribute only to the bottom line of the two fairly addled entrepreneurs for whom I was, before I left LA, working. 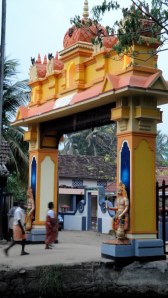 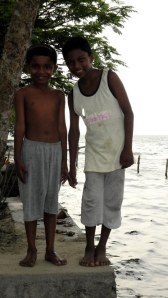 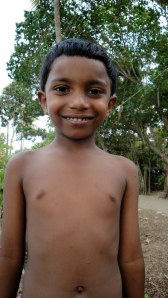 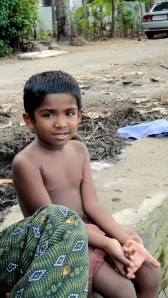 I figure this way, if I end my days single I’ll at least have some good stories to tell and a higher ratio of job satisfaction than many of us do. The alternative, hanging in dull jobs and silly dating events that add little newness to my life, seemed to promise an endless cycle of diminishing-return jobs and first dates that never really lifted off the ground of their clumsy first greetings. I am still largely an optimist, but I have realized that if corporations can rise and fall on the fortunes of movies and books and magazines that tell stories and offer advice to help women in their search for the right man…well if that standard-issue search is difficult enough of success to spawn the industries it’s spawned, then how much more difficult of success is my own, and should I really put the rest of my life on hold while clinging to what optimism remains to me? 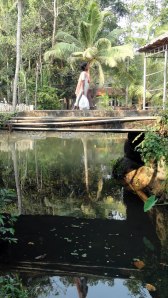 My point being: here I am, a lone passenger exploring life, at the moment from the prow of a small houseboat in Kerala, and it seems such a terrible waste that there’s no one here to share it with me. House-boating on the Keralan backwaters joins Paul’s endlessly-growing list of things to do with a boyfriend if he ever meets one; right up there with ‘weekend at Big Sur’ or ‘vacation in Provincetown.’ If I’ve learned anything it’s that we’re really all the same in the end, and though the surroundings may change, a human being wants connection, respect and a place to feel at home. And for now I’ve got wading and flying waterbirds to watch, hundreds of miles of canals and backwaters to occupy my imagination, and apparently some idli (google it) on the way for breakfast. It’s not at all a bad position, all things considered. 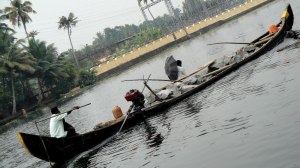 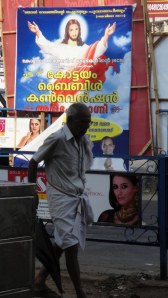 Above: street scene in Kottayam, northeasternmost corner of the backwaters and site of Arundhati Roy’s celebrated book, God of Small Things. Below: it’s not Long Beach…it’s Queen Mary of the Backwaters. 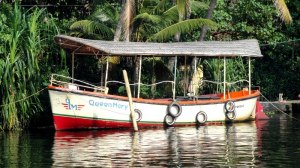 Above & below: my guesthouse in Kumarakom (Keralan architecture is really quite lovely – as seen especially below, in the photos of Padmanabaphuram Palace), and farther down, the crew of my little houseboat. 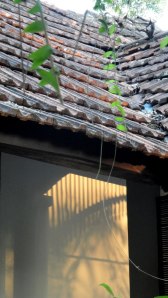 This entry was posted on March 1, 2010 by somuchworldsolittletime. It was filed under India, Kerala .