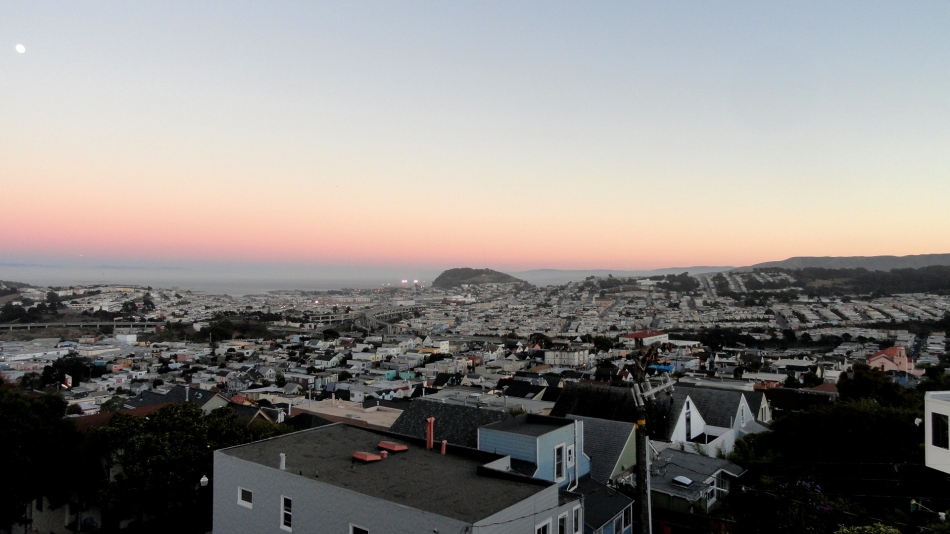 …so it’s September 21 and smw, slt has been in SF for six weeks that have flown by in a blur. We’ve been back in the US nearly four months – again, time that’s flown past with family, friends, meditation weeks on Star Island and yoga classes in San Francisco. Amazingly, the last phase of my planned down-time will arrive next week when I head off to Los Angeles to create some final mental-vacuum space in my head, into which I’ll then start leveraging all the new information about wherever it is I’ll be working next. More on that when the time is right, for those interested – it’s slowly becoming clearer, but nothing is yet very definite.

For now I wanted simply to share some photos of my beloved California, land to which my heart always wants to return. This blog has shown very little of my spiritual home in the US for a while, since I was tied down on the East Coast and out of the country most of the time between September 2007 and … well, last month. So herewith a bit of the northern coastline. True, the photo immediately above just shows you the sunset & moonrise view from the top of Bernal Hill, which I’m fortunate to be able to call my home in SF thanks to dear friends who make room for me in their lives & family when I’m here. But SF is only either the beginning of northern California, or the end of central California, depending on how you choose to view it. The real north begins when you cross the Golden Gate Bridge, or even when you get farther up into the coastal redwood forests of Humboldt and Del Norte counties. I did that, the first weekend in September, on a five-day road & hiking trip with a Howard & Jim & Shantanu that took us all the way up to the Oregon border, and did some great exploring of forests, coasts and towns along the way.

…that’s me on a log in a waterfall within Jedediah Smith Redwood State Park. And below, a view of the Smith River upstream from the Redwood Park near a watering hole where lots of folks were floating on inner tubes and sunning themselves on a sandy beach.

The photo above is actually Oregon, just over the border – where we stayed for a few nights was right on the border, so our beach walks easily took us over into Oregon; further down are some close-ups of beach flotsam and seaweed which are also Oregon seaweed, and Oregon flotsam. Below, my friends by a mural in the AWESOME haven of Arcata, one of the spiritual hubs of the Humboldt Nation and, I hope, a future US home base for yours truly.

A view of Arcata Bay from the hill Arcata, above; and below, a carved deceased tree trunk in the Arcata community forest.  How many other towns in the world can you think of that have an enormous redwood community forest??

The evening we arrived in Arcata, there was a folk band playing some music right there on the plaza in the heart of town. Kids were dancing, bikers were stopping to listen, and the sun streamed down. 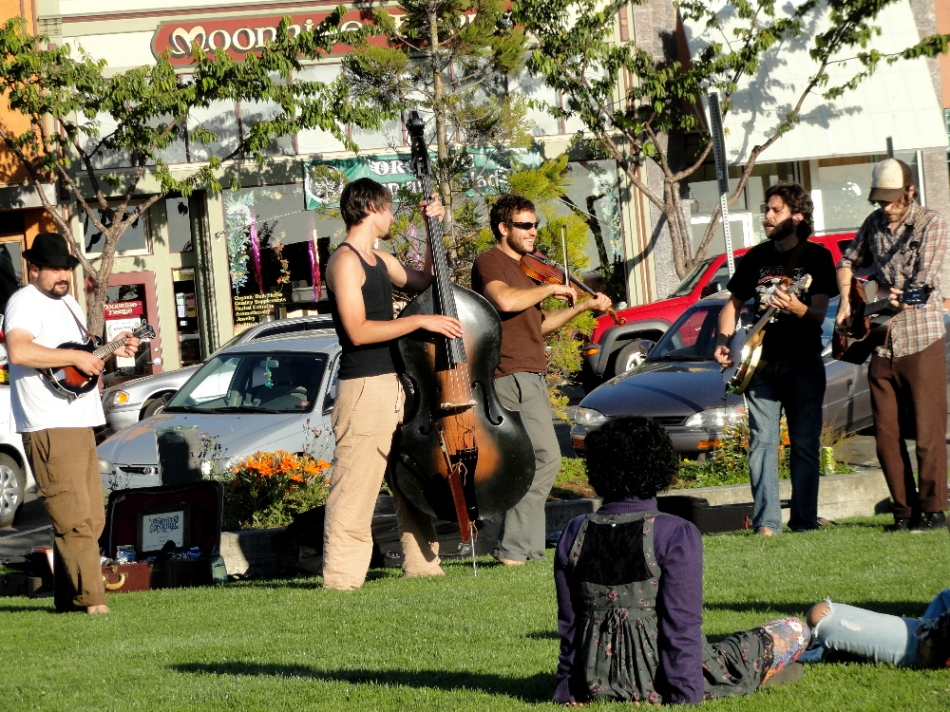 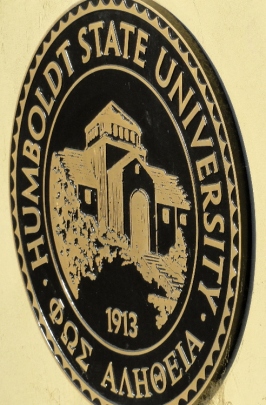 Arcata: a university town fronted by a lovely bay, backed by a community redwood forest, centered by a plaza that flies the US flag, the California flag, and the earth-as-seen-from-space flag. Oh, yeah, and a place that certainly stands to benefit if Californians decide to vote in favor of the ballot measure that would fully legalize – and fully tax – the marijuana trade, by way of compensating for all that federal money no longer coming to support basic needs in our state now that our national budgets have been so constrained by needless, endless wars that prior administrations launched so casually, and that we and the world are still saddled with… Thanks again, Geo W and all you republican hypocrites who like government deficit spending when it’s to kill people halfway across the world, but not when it’s to build schools and railways and other things that help keep real people alive and leading real lives.

Below: lighthouse at Crescent City, the northernmost town of any size (i.e. 8000 or so inhabitants) in California. 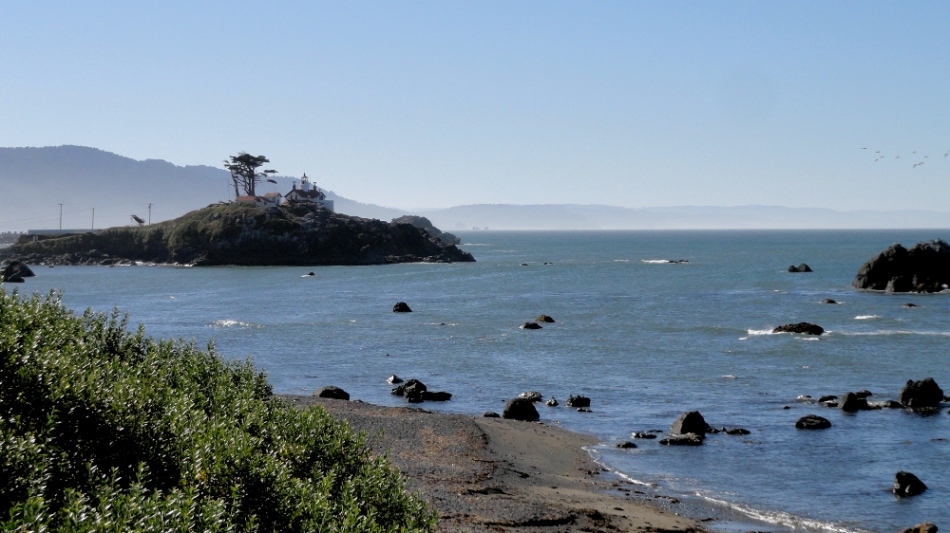 Above: Howard and me in California; below: pinecones, kelp, driftwood and seaweed in Oregon. 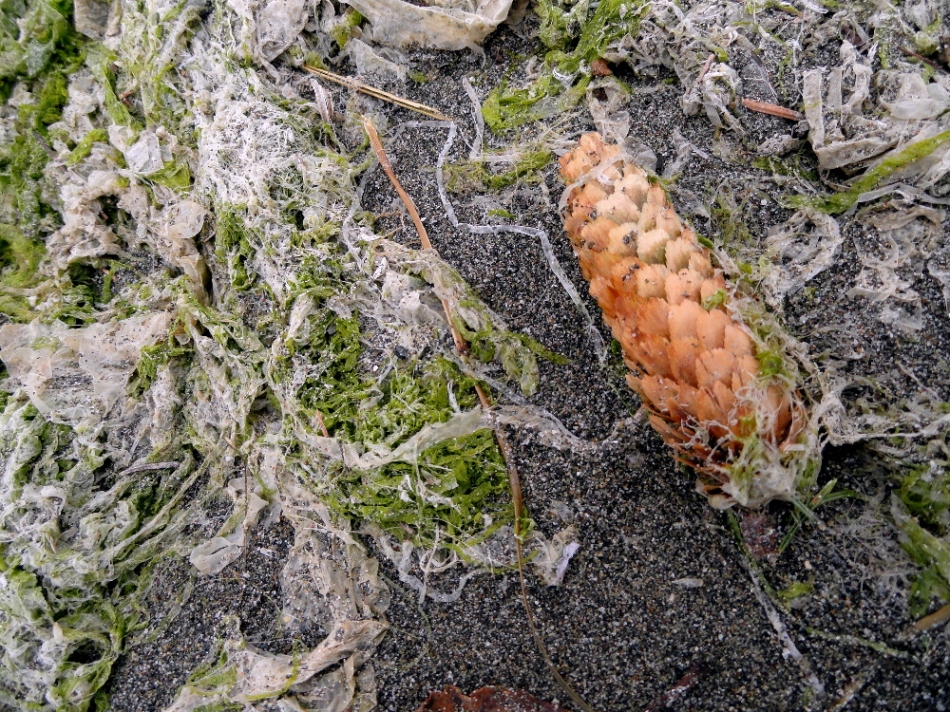 There is no good way to capture, on a still photo, the magnificence of a mature and large redwood forest – or even of a single massive redwood tree. Those who’ve been to Muir Woods just over the Golden Gate from SF, or to the groves of mountain redwoods tucked into pockets of Yosemite and Sequioa National Parks, have some idea. But these northern coastal redwood forests are enormous – hillsides and valley bottoms covered in ferns, with entire forests of towering redwoods rising majestically far into the sky from the quiet, mossy & ferny bottoms. Above is a particularly monumental tree that’s been named ‘Boy Scout Tree’ within the Jedediah Smith Redwoods State Park – you can get a sense of its enormity by how tiny Howard & I are against its trunk. Imagine entire hillsides and valleys full of trees not that much smaller than this one, without really very many people around since it’s all very far from anywhere else, and you get an idea how wonderful these parks are! 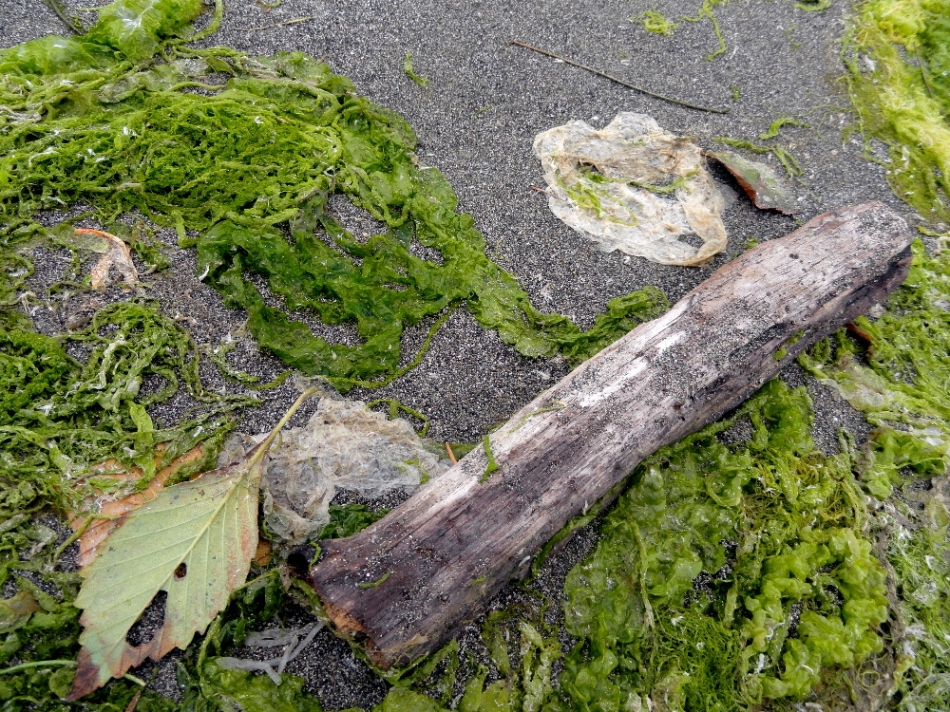 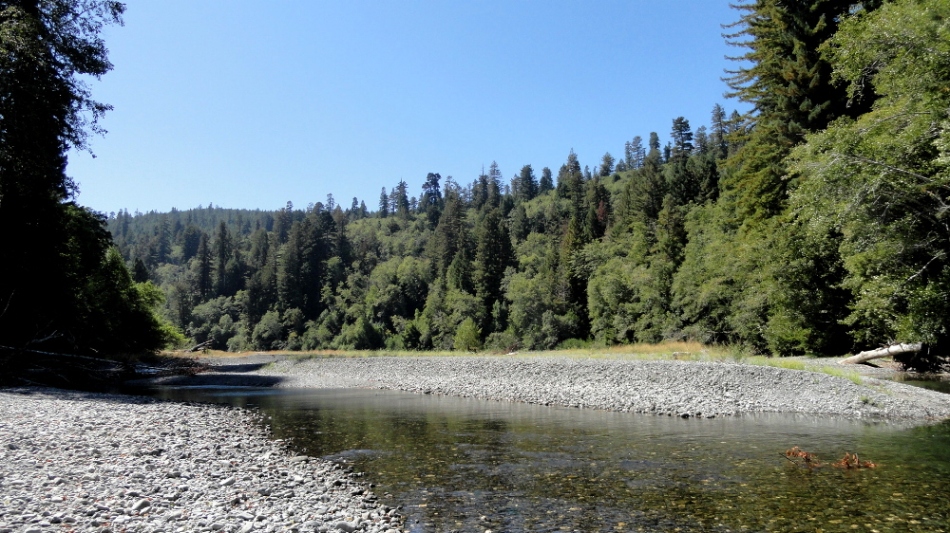 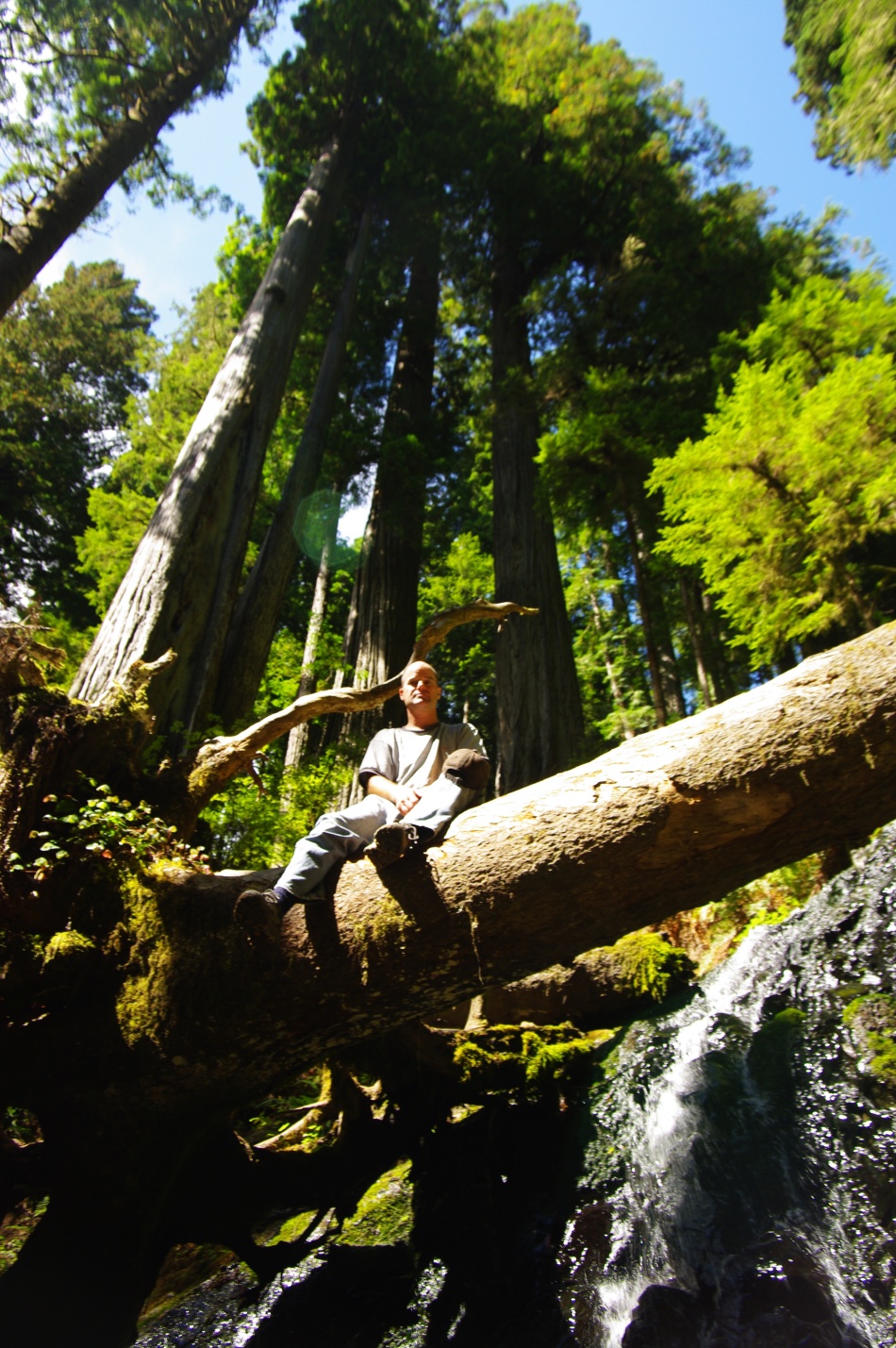 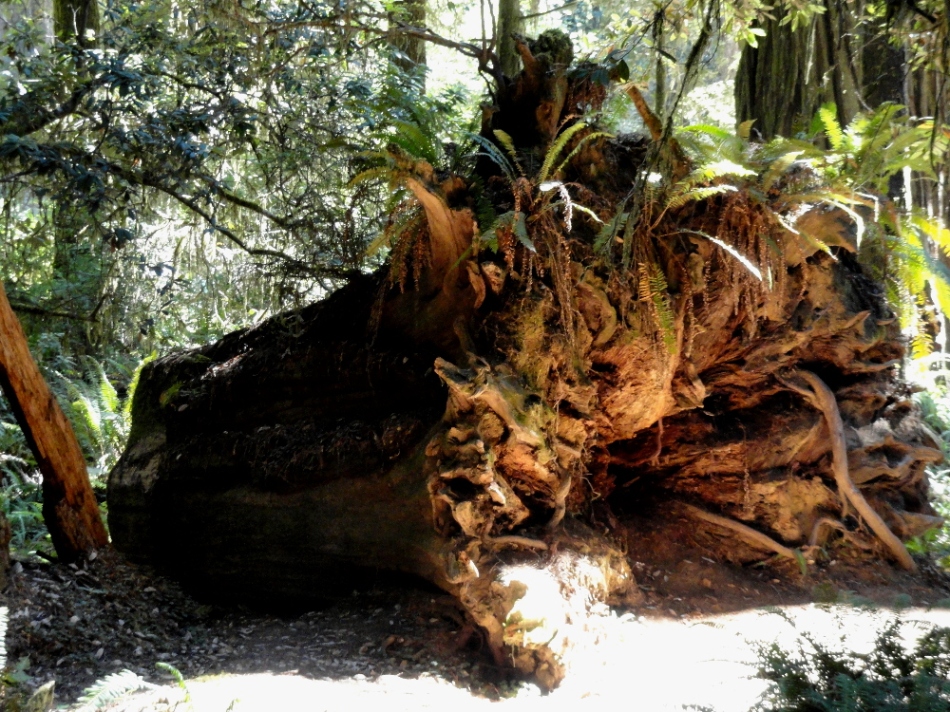 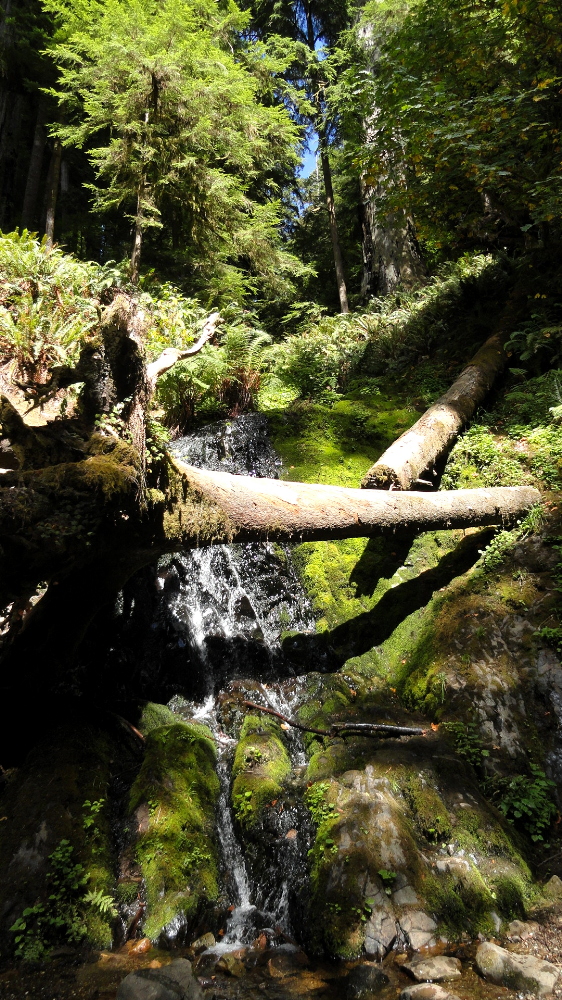 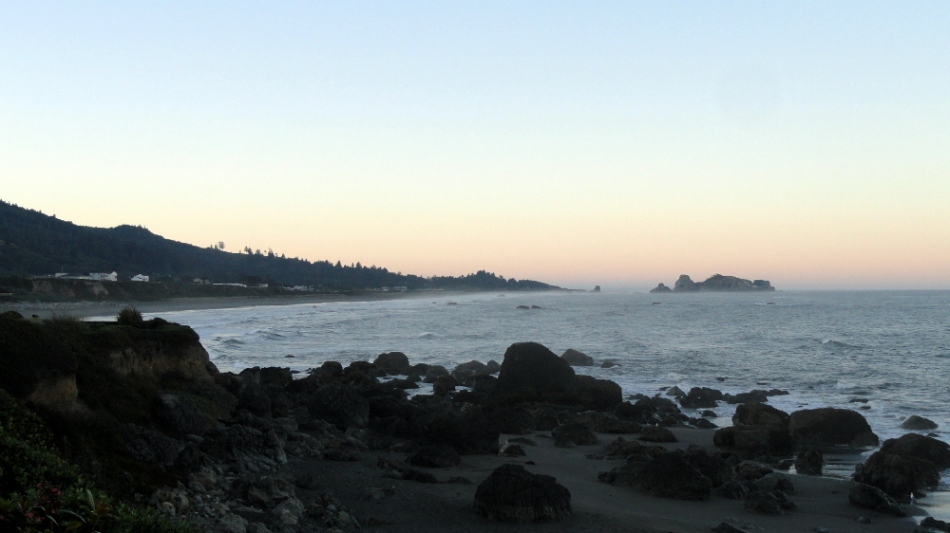 This entry was posted on September 21, 2010 by somuchworldsolittletime. It was filed under California .