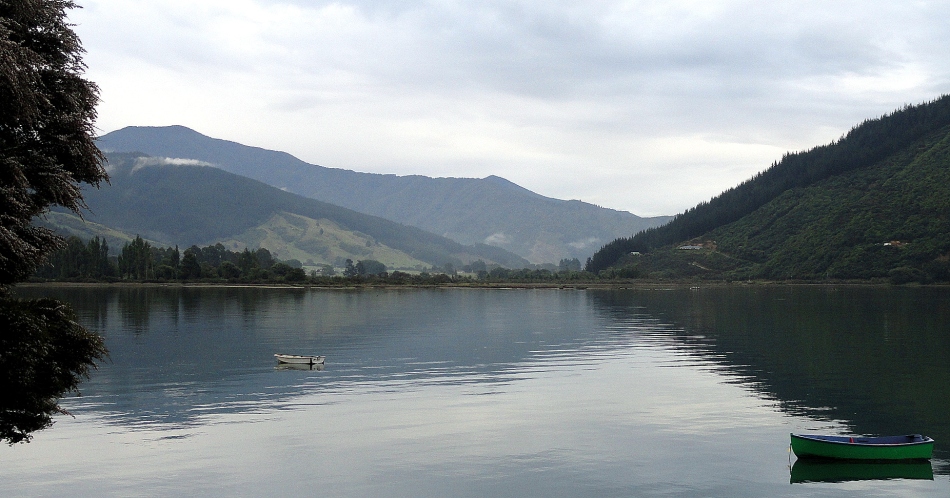 This is where we spent the last few quiet, peaceful, absolutely blessed nights on South Island, there at the tail end of 2013 with my mother and brother. These are the Marlborough Sounds; if you’re so inclined, google ‘linkwater marlborough’ and you will see exactly where on the map of the world the shots above were taken: at the base of the Grove Arm. With Howard and Gene, five years ago, we drove fairly rapidly through this area en route from Nelson to our Kaikoura Coast Trek, but I remembered it as a lovely spot well worth revisiting. Now I’ll remember it as one of those places on earth I could very happily live, or retire, if I could ever afford it. 🙂 A lovely mix of pastoral, agricultural, maritime, small-town, outdoor-adventure…you name it, you got it there from milk cows to fantastic kayaking and world class wines. (Wonder if NZ tourism will give me a cut for the referrals here…) Btw below are the panoramas giving you about a 280-degree view from the pier on which the above photo was shot.

At the moment, a soft rain is falling on a Port Moresby Sunday morning, and I expect only to wake up in Port Moresby (or PNG more generally) on only seven more Sunday mornings. After having done precisely that for most of the past 104 Sundays, this comes not as a shock, but as awareness of imminent change. Friends on the email list have already started hearing from me about the plans, and in the months after March this space will feature more of North America and Europe than the South Pacific. And I’ll hopefully spend a lot of time on my bike and in the yoga studio. For now, my goal is stay focused and keep things on a steady course as we head into the home stretch. That’s all I shall say now: enjoy these shots of the Marlborough Sounds and Marlborough wine region, and some of the west coast and central South Island mountainy areas we drove through getting from Christchurch up to Linkwater. Peace, out, more at some point… 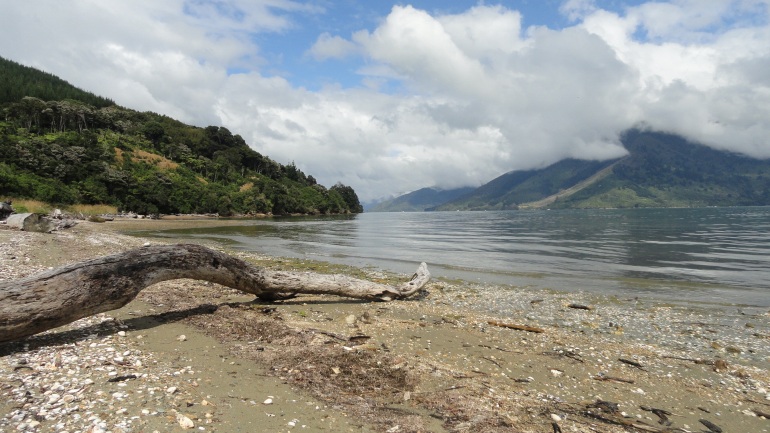 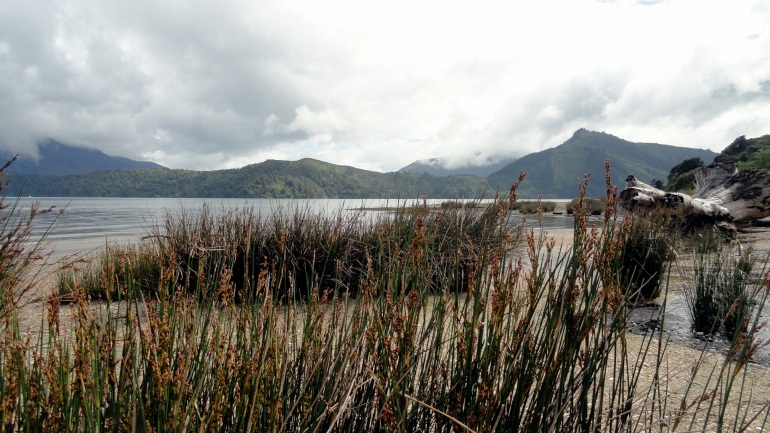 All of these initial shots, up until the last photo of the bay with the green boat and the tree, which comes just after the display of mailbox pride in the Marlborough Sounds, are from the basic Linkwater area. If this appears correctly, below you see a rainbow and if you look closely you’ll note that it’s actually double rainbow. It was, in fact, the fullest, clearest and sharpest full double rainbow either Steve or I had ever seen. (Mom was napping.) After the mailboxes, you’ll see various photos taken of the mountains, rivers, and vineyards that extend around the middle of the island south of the Grove Arm and north-northwest of Christchurch, through which we drove on…the rainy 29th of December, to be quite accurate. Enjoy! Happy new year! 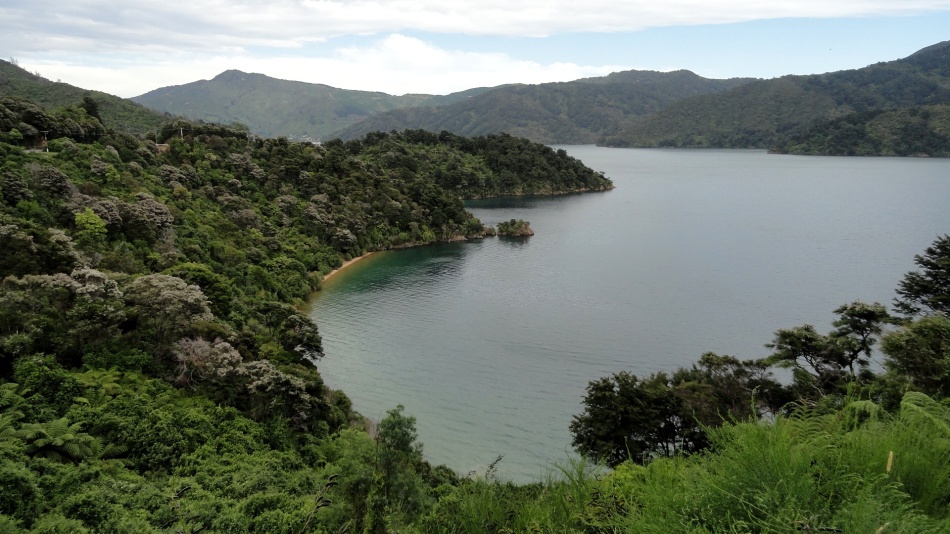 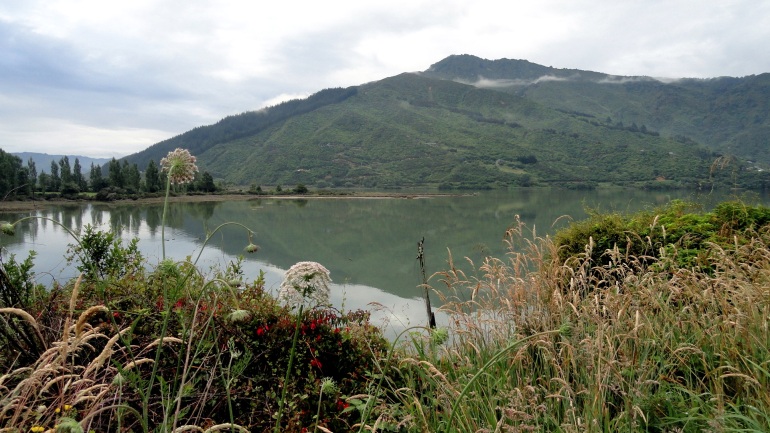 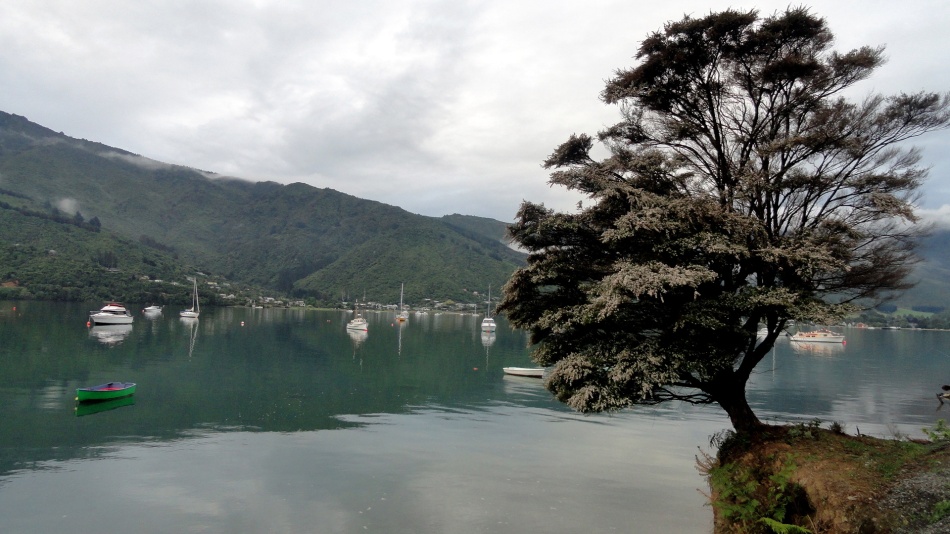 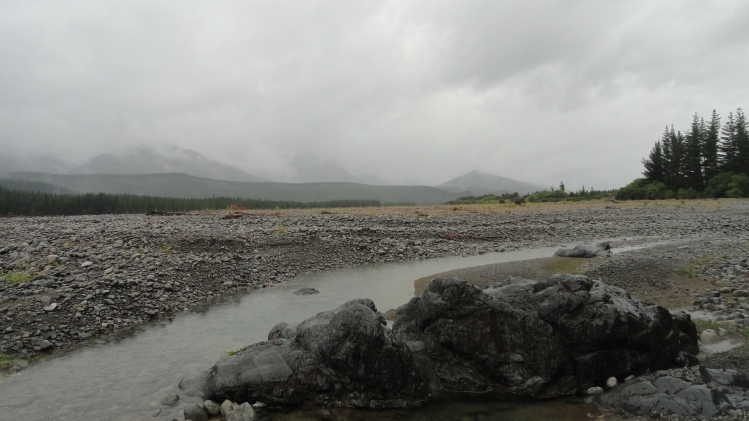 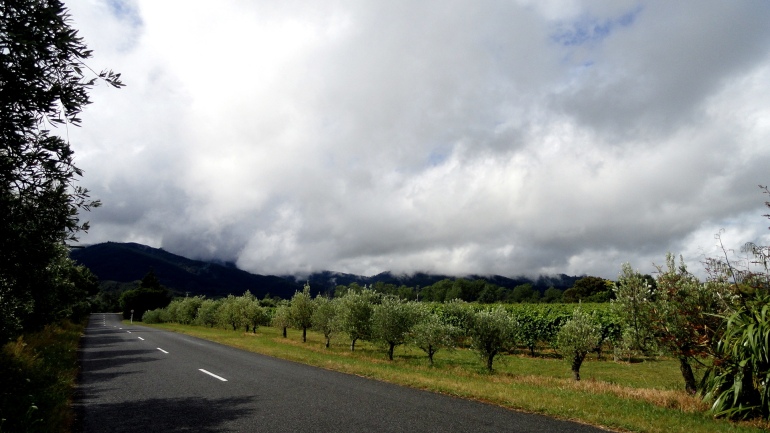 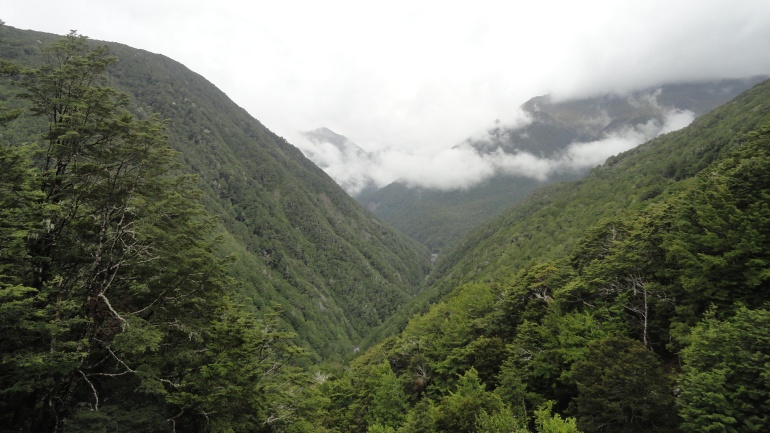 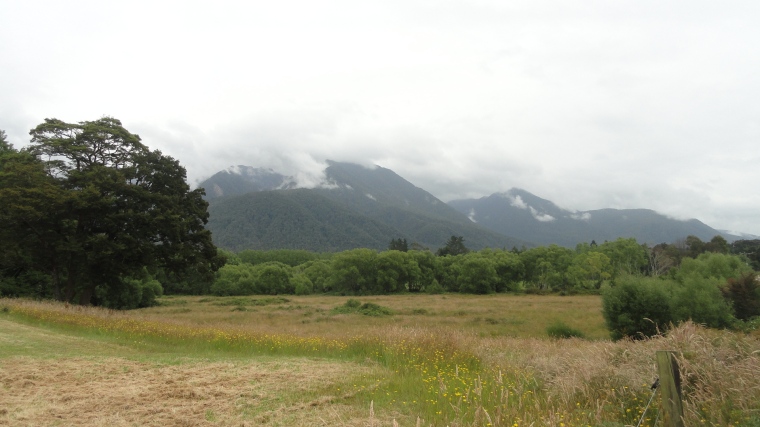 And here some shots again of the Cook Strait as we departed South Island and headed back to North Island: below, Picton Harbor from on board; and a few shots below the exit from Tory Channel into Cook Strait with North Island in the distance; and further down a panorama shot in which you see both North and South Islands from the boat in Cook Strait.

At the north end of South Island is a region called Marlborough. It’s New Zealand’s main (of several, for such a small country) wine-growing region, and home to Picton (a little town where the ferries from North Island arrive), and Nelson — to which Howard, Gene & I flew after regaining our bearings with a day or two in Auckland and a walk on Rangitoto Island (below — I’m messing with your minds if you’re trying to follow my itinerary here; I’m putting up regional segments based entirely on how visually appealing they are and how important they were to my experience in NZ…deal…). Nelson is just south and east of Abel Tasman National Park, for which we sadly did not have time; I’ve included, below, a few shots of what I think are the mountains from that beautiful area, as seen from our overnight hub of Monaco, on the Western edge of Nelson. I have included some of the nicest shots of vineyards around Nelson and Blenheim, a swimming spot along the Pelorus River (which, Wikipedia tells me, is known for its ‘magnificent’ river swimming – but we didn’t know that when we crossed the bridge in our rental car and decided we just HAD to join the folks at that swimming hole), as well as some shots of both the Pelorus and the Queen Charlotte Sound, which are among the Marlborough Sounds — yet another amazingly beautiful region on the northeastern corner of South Island, near Picton where those ferries from Wellington dock.

I think those mountains in the distance are in Abel Tasman National Park. Oh well, next trip…

This is the cute little town of Nelson (sidewalk rolls up, even on a holiday Friday, by about 22:00), above and below. Nelson gets more days of sun that most other parts of NZ. Which…well, isn’t necessarily saying all that much. 🙂 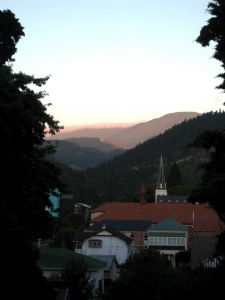 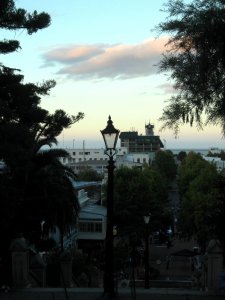 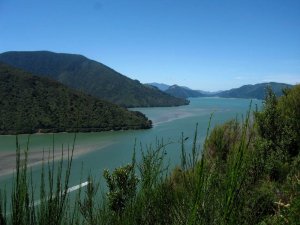 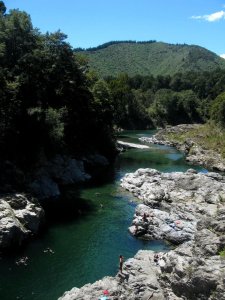