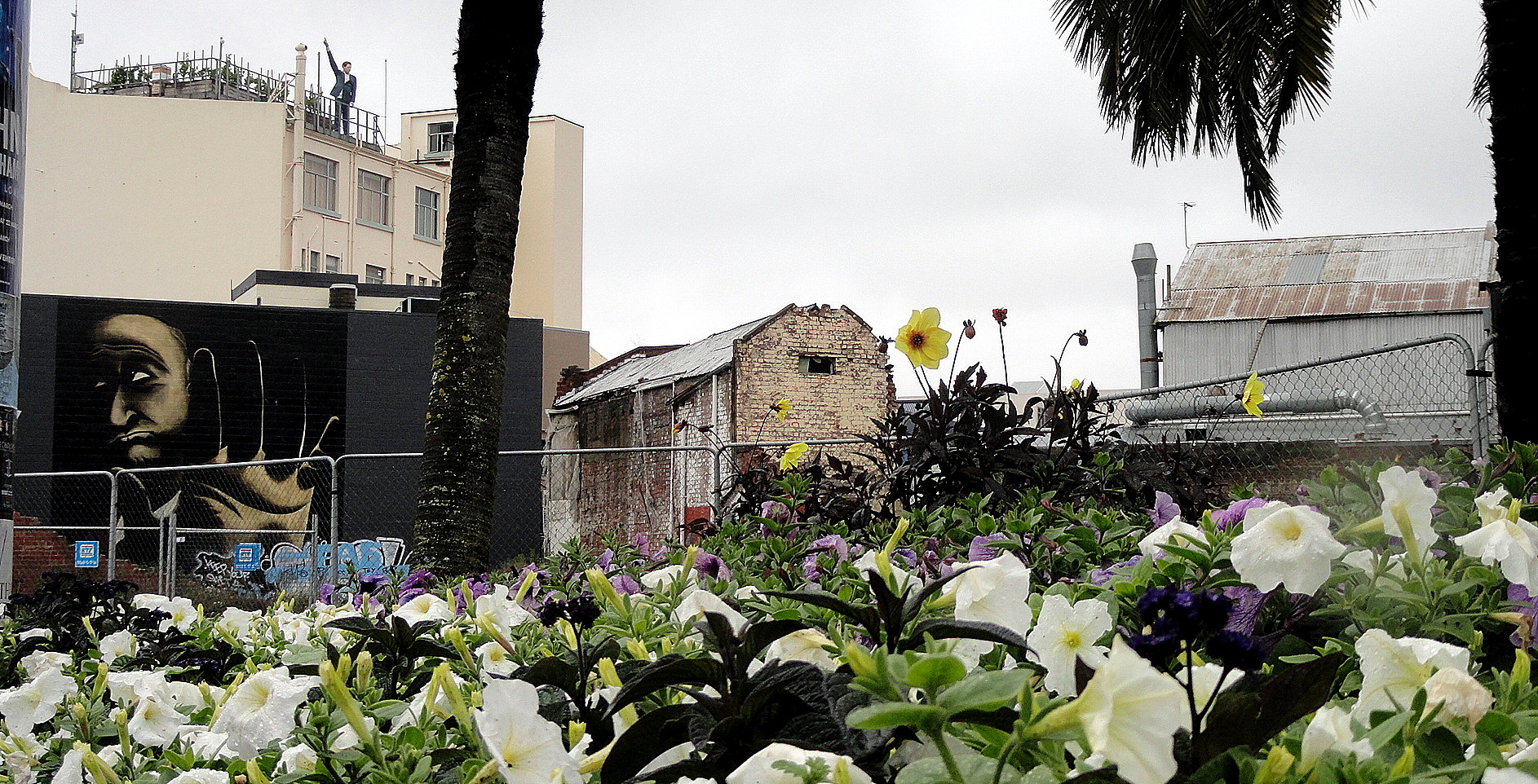 It’s a gray and wet Sunday morning up in the highlands, at Tari, where I sit as I load up these photos and think about what to write. Two weeks ago – shocking, that fact – I was driving with Mom and Steve from Christchurch up to the Marlborough Sounds area, via the longer & very scenic inland route through the mountains and along the rivers, rather than straight up the east coast. Having now been back at work for (only) ten days, that long and lovely drives feels ages ago, but reviewing these shots taken during a few rainy, sombre and emotionally-rich walks around Christchurch brings a lot of it back.

After celebrating Christmas in Queenstown, we headed up to Christchurch which I’d chosen to visit for two main reason: 1) because I felt Mom would really love the wildlife of the Banks Peninsula (and indeed, as attested by comments from Steve on one of the other posts, they did have a remarkable boating day out there), and 2) We needed to break up the drive back to the north somewhere, and this seemed a reasonable stopping point which I’d not previously visited — well, other than one afternoon in town when a plane from Dunedin–>Wellington got rerouted due to weather. I knew Christchurch had been hammered by one major earthquake and many substantial but less damaging ones in recent years. The major destructive earthquake happened in February, 2011 — so nearly three years ago.

Being tired from the drives, needing respite from responsibility so that I could recharge a bit prior to returning to work here, I convinced Mom and Steve to tour on their own for our two days in Christchurch, which left me free to wander aimlessly about the city…which happens, when left to my own devices, to be one of my very favorite pastimes nearly anywhere I can get away with it in reasonable safety, especially when I’ve just left a field location where it’s not especially encouraged. Although the days were gray and mostly rainy, I hope & think I’ve still managed to show you a bit of what’s going on in the city now. It’s coming slowly back together – but it seems as though the city and its inhabitants – and its government – were in fairly major denial about the fact that they’re situated in an earthquake zone. There weren’t very strict building codes, lots of high buildings were allowed to be constructed on swampy ground which we’ve all known for years can basically liquefy in certain types of earthquakes…and generally, everyone seemed to have lived, until that fateful day, in blissful oblivion to the fact that they’re … well, in the Pacific Ring of Fire with all that entails.

This fact caused me to consider, again, governance and its value and importance in societies. Lunatics who periodically hijack the government in my home country (they name themselves after an excellent hot beverage of Asian origin) like to delude themselves that government, as a concept, is by and large bad. I would so love those pampered and spoiled folks to live in some of the places I’ve worked over the years, places where government really and truly does not work, by and large does not functionally exist for citizens. In NZ, it does – and I’ve always thought of NZanders and practical, egalitarian, pragmatic and above all fairly realistic. Thus it came as rather a surprise to me that the society and government hadn’t determined, prior to this disastrous event, that strong building codes and earthquake retrofits were in order. Still and all, they didn’t – and now the city and the sense of shattered elegance, of confidence lost, brought some tears to my eyes. It’s a very sad and shocking city now, but it’s also an inspiring city in the ways in which people are getting on with business, building codes and zoning are now being strengthened, and slowly but surely Christchurch and its inhabitants are determining what sort of city they will be in the future. I’m glad I visited and I wish them well with their efforts.

…every shot so far has been taken in the same small area along High Street near our hotel. Immediately above, with flowers at the bottom and wrecked buildings behind, you’re seeing the back side of the buildings whose fronts are lined up along the (now closed to vehicular traffic, as are many streets all over central Chch) along High Streeet — which make up the shot below and many others; and the start of which is framed by sculpture in the two shots from slightly different angles up above. High Street runs from the southeast edge of central Chch right up to Cathedral Square, the heart of the city as it has been until at least now. (With new building codes there are areas where, I am told, they have determined no longer to build: doubt this is one for emotional-pride reasons, but don’t know.) The coffee shop whose lintel I show here is literally the one building standing tall amidst these ruins, and it was jam-packed with customers coming from and going to the gym when I visited; the Man in the Sky (my name for him – no idea what he is other than interesting art) whom you’ll see a few times is on top of that very building: all of these shots are from really a quite condensed area in the heart of downtown Chch, which was the area most dramatically affected. 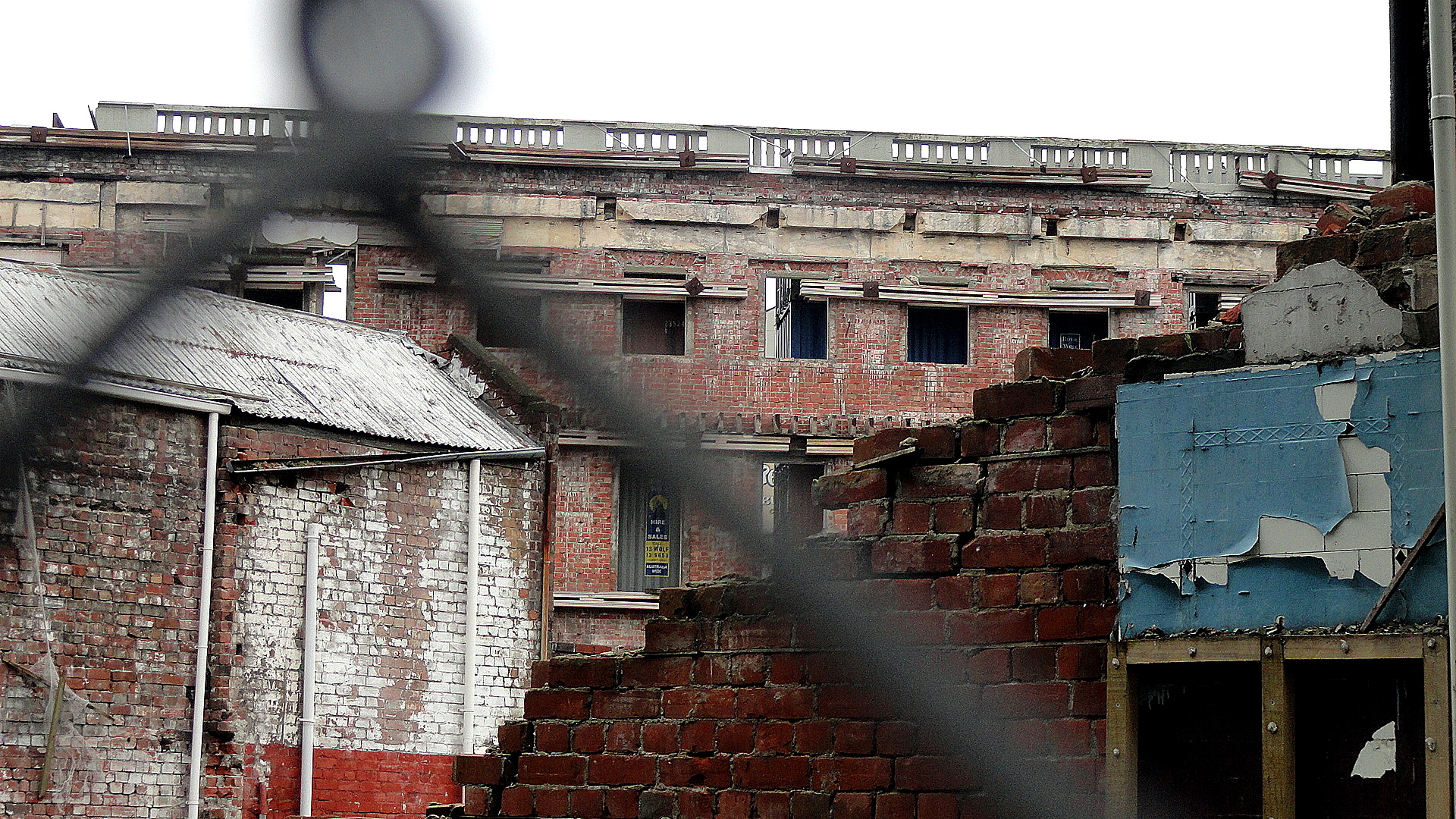 “Protect Your Investment” — looks old enough that it may mean this lot next to it was vacant even before the earthquake, but it’s also possible it was just an old ad protected by the building next to it for years and exposed when the building next to it came down. Said one guide: central Chch used to have a serious shortage of parking; not any more. In that, I was reminded of SF after the Loma Prieta quake. You can see a less artsy view of this ad, the graffiti next to it, and the building housing the cafe and supporting the Man in the Sky in the gallery of smaller images, down below. 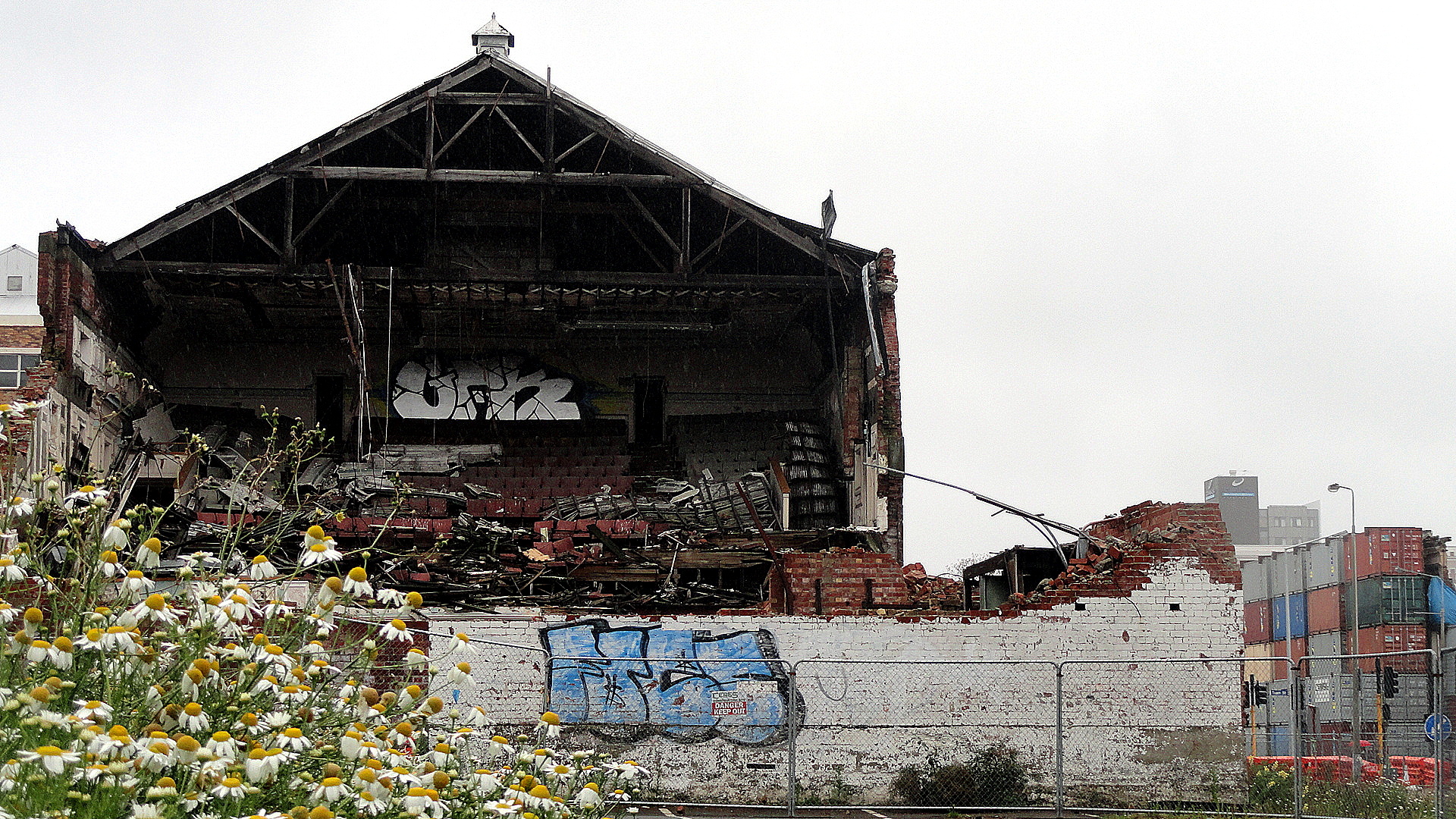 The more upbeat street art, above, is painted on a city-government rebuild or jobs office of some sort. Immediately next door is the more political occupy-movement street art: sort of dueling street art, eh? One thing that vacant lots present is many such opportunities for artists. Just below I’m showing you how they’ve used rock-filled containers to form retaining protective walls in front of structurally-unsound buildings whose fate has not yet been determined or carried out, so that passing pedestrians or vehicles won’t be harmed if they crumble further in a subsequent earthquake etc. Btw, this building below is the theatre you saw with wildflowers, above. And it’s catty-corner across from the “Protect Your Investment” lot.

Above: the Re: START mall, on one of the most destroyed blocks of commercial central Christchurch they’ve established shops and cafes in containers. Immediately below: three photos all taken from the same spot, just turning my head to look in a different direction (well, the one with the monument I had to reach the camera up to shoot over a fence…) 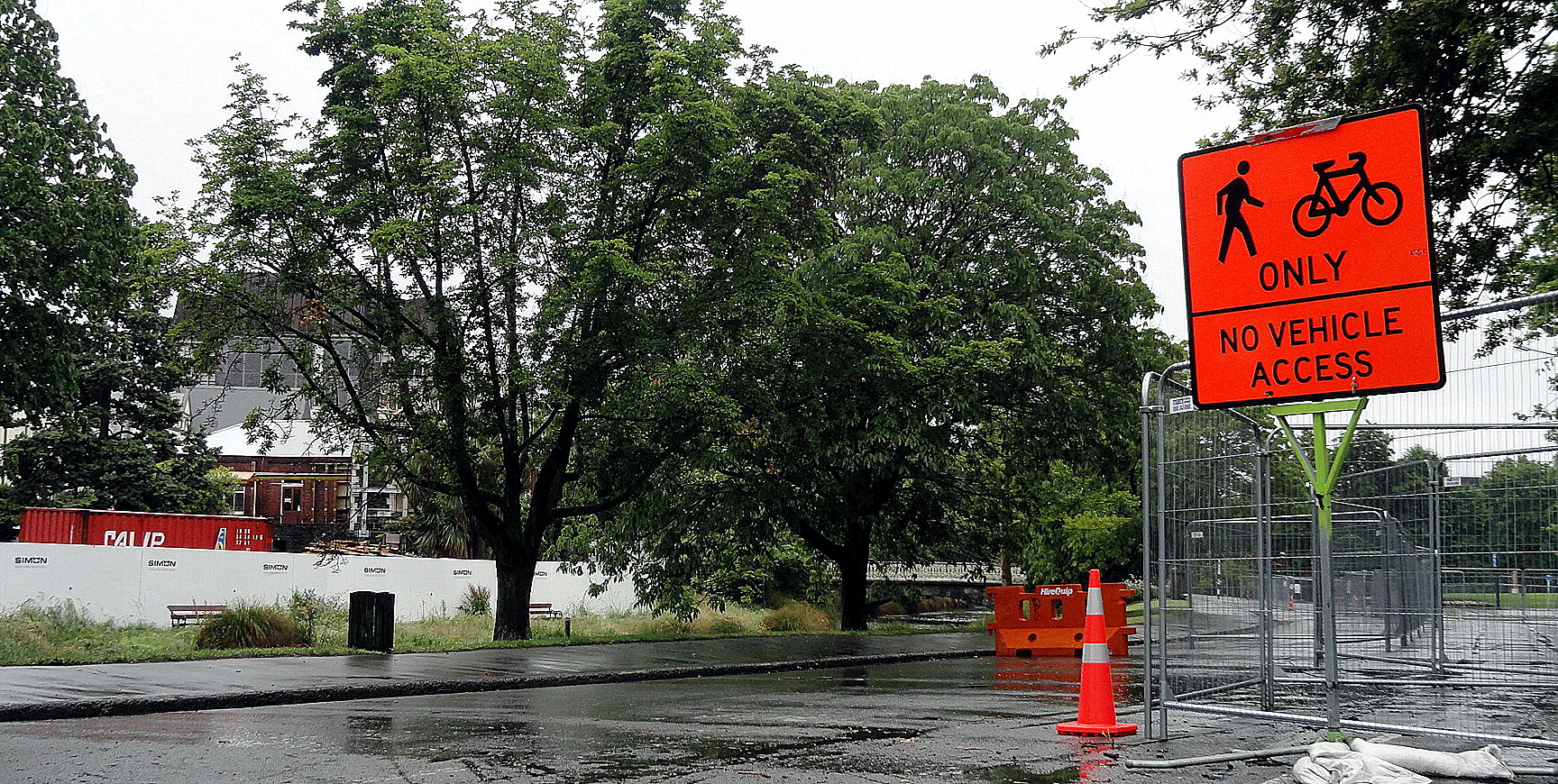 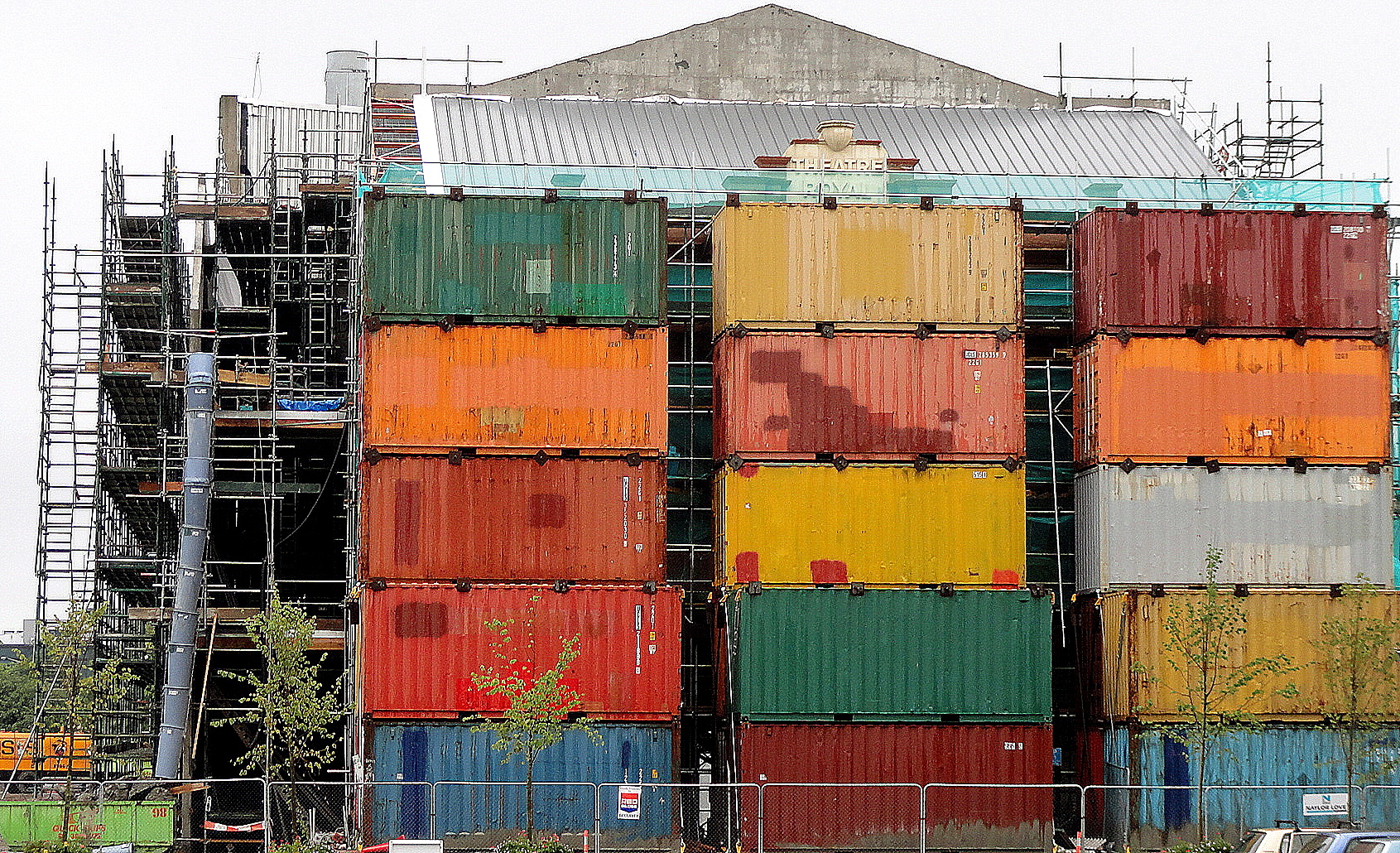 …the cathedrals old and new, above