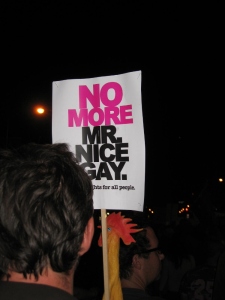 The day after our national election on 4th November, I flew to LA. The main purpose, honestly, was to retrieve winter clothes from storage: and the trip came not a moment too soon; these last weeks I’ve worn little other than the sweaters, jackets, mittens, scarves and other annoyingly bulky items I dug out of the hidden corners of my storage space. It’s been quite horrifyingly cold lately in NYC, even more so to one whose nerves and body had become accustomed to gentler equatorial climes these recent years. But I digress.

California, as many even outside the US are now aware, was the scene of perhaps the most disappointing electoral loss for the equality-minded on that night of otherwise glorious and liberating news for us all: by a simple majority on a ballot measure, the California state constitution was amended to eliminate equal access to marriage for lesbian and gay people — thereby relegating us to second-class status, even within California which has a good civil-union law for us 2nd-classers, let alone in other states whose laws are far more restrictive and discrimatory — not to mention federal laws which take no account of our families and relationships, whether for taxes or immigration or any other civil matter . Fired up by our disappointing loss, progressive spirits of all stripes (not just the LGBT community by any means) have begun to organize and try to reach out to those who voted in favor of restricting equal rights. There are many reasons we lost on this ballot measure and thus lost our equal rights — we didn’t reach out enough to religious and other communities who feared that our equal rights might infringe on their free practice of religion (whereas the campaign in favor of restricting our rights played actively on that fear among religious communities, and was very strongly funded by members of both the Catholic and Mormon churches), those of us who might have devoted more attention to education and outreach about the issue were focused on work, our economic and career fortunes, or trying to get a responsible and honorable president elected for the first time in this millennium. Be that as it may, we have some catching up to do. 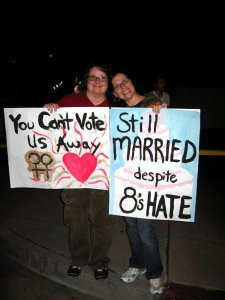 I’ve always been afraid to reach out as a gay person to my non-gay/lesbianfriends about my need for equal access to rights like life, liberty and the pursuit of happiness. (I’m not joking — Matthew Shepherd was killed not all that long ago for the crime of wanting to love the wrong person, a fear of which has certainly affected my ability to reach out to those I find attractive and interesting.) Some inner voice has always said my equal rights matter less than those of others, because it’s always been this way and after all, I could fake it if I wanted to. (About as well as one of my uncles and all those others who leave behind broken families and shattered dreams when they finally give up on trying to be what they, quite simply, cannot be.) But these voices rest on misbegotten notions that we queer folks can, or should, change who we are. I don’t necessarily plan to marry any time soon or think it’s right for everyone of whatever love interest, but I don’t see that my right to do so should be different from that of my brother, cousins and best friends who’ve been married for years – in some cases more than once.

If the churches don’t want to sanctify my relationship, that’s fully a matter for them and their adherents to debate and hash out — as is happening, globally and visibly, within the anglican and other churches. But just as any church can deny religious marriage rites to non-adherents of its religion, so too it OF COURSE can decline to sanctify my marriage or my existence. But for a civil society based, finally, on equality for all — for a nation that 90 years ago finally allowed full ballot access to women, that 30 years ago legally overturned bans in many states against interracial marriage, that has struggled for all of its existence to overcome the inherent barriers to full participation in citizenship and society for all the many ethnic, cultural and religious groups who find their homes here and especially to all the Americans of African ancestry — how can such a nation, let alone one of its most progressive and leading-indicator states, still actively relegate me and my community to second-class status in a clear matter of equal access to civil rights and full particpation in civil society? 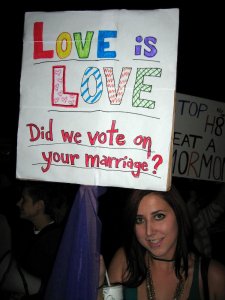 In the heat of the moment, I penned an angry letter to the head of Park City’s chamber of commerce – a lovely city where I had a great ski vacation once. Encouraged by a friend, I posted the letter on the blog and called on friends to join the boycott. I still feel this way, but I’m less fired up now and perhaps almost embarrassed at the youthful energy and righteousness of that letter. I understand there are those whose religions say I’m abomination. Personally, I find their religions abominable but I’ll fight to the death for their right to practice them, so long as they leave me alone to live my life without causing harm to others. And that’s what it’s about, for me in this. But I do think we need to find ways to communicate constructively with those who aren’t comfortable with us and our demand for equal rights. Just as other minorities over the years have overcome ‘scientific’ or religious explanations of their natural inferiority (heck, it wasn’t until the late 1970s that the mormon church noticed that black skin pigmentation was, in fact, not punishment from god), we too shall ultimately overcome the prejudice that still says we’re somehow different or unequal. But to do so, we’ll need help and we’ll need to reach out. Now’s a good time to start.

…Above and below, shots from one of the largest spontaneous marches the weekend after the election, through Hollywood in LA. 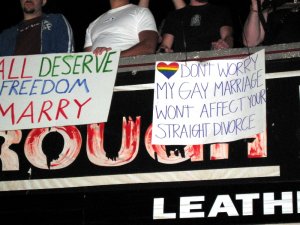 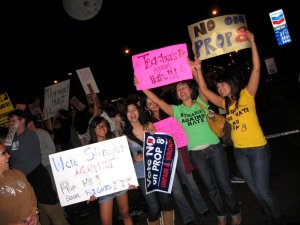 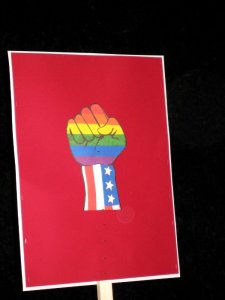 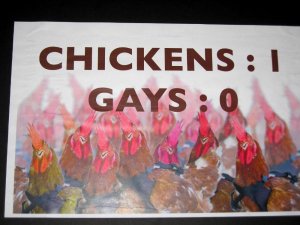 On the same day, a majority of Californians voted for a ballot measure that will require chicken farmers to allocate a minimum amount of space per chicken in their coops, so as to avoid overcrowding. 🙂

This entry was posted on November 24, 2008 by somuchworldsolittletime. It was filed under California .