Travel Before & After the Smoke Spread 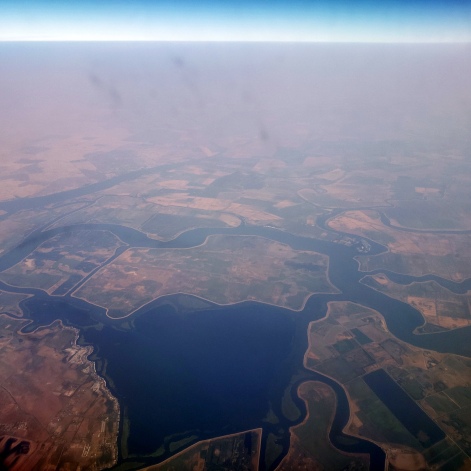 The first and second photos above were taken almost exactly two weeks apart, on September 2nd and 16th respectively, from the skies not at all far from ORD, the main airport in Chicago. The third was taken on the 2nd above the Sacramento-American river delta, which feeds San Francisco Bay, at time a time when smoke was already affecting northern California but hadn’t spread as far and wide. The fourth was taken on the 2nd somewhere above Iowa or Illinois, I’m guessing. On the flight from SFO to ORD (2nd), I didn’t have flight map available readily, so the names of the photos are my guess as to where the plane was when I took the shot. Flying home on the 16th, I know where each shot was taken and you’ll see pretty precise into in the photo names.

As you’ve seen from prior posts, our wildfire season began earlier than usual in Sonoma County and Norther California generally. This brought smoke to our skies, which I’ve already posted about here. While I was enjoying time by Geneva Lake in Wisconsin, more fires started due to more unusually hot and dry weather all over the west coast. Then the smoke spread to many of the midwestern states which … umm, narrowly voted for the president who withdrew the US from the Paris accords. I found the flight home on the 16th so distressing, because the smoke was visible everywhere. How long will a rigid core of Americans continue to think that climate-change denial is good public policy for the nation with the largest economy and carbon footprint globally???

In the gallery below, you can read date and location info in each photo’s name. As you see above, we in California already had smoky skies on the 2nd, but actually when I flew back in on the 16th, an onshore flow had driven the smoke away in my area. For now air quality has been reasonable and the sunsets lovely but not too scary. 🙂 It’s about to get hot and dry again, so please hold the though “no new fires” in your mind, and prayers if you do those. 🙂 Peace and a truly democratic, majority-based outcome for all elections in the world, be it Belarus or the US… 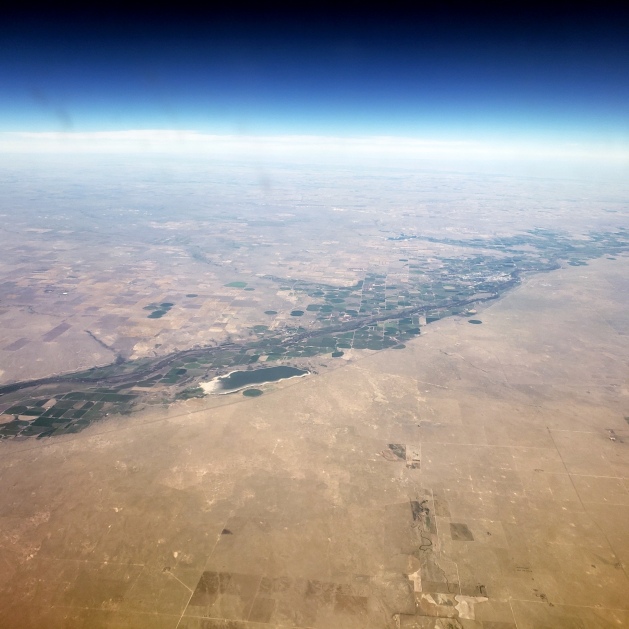 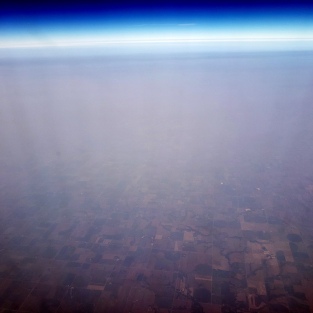 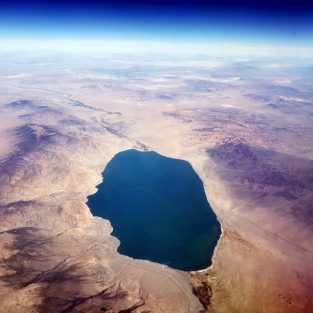 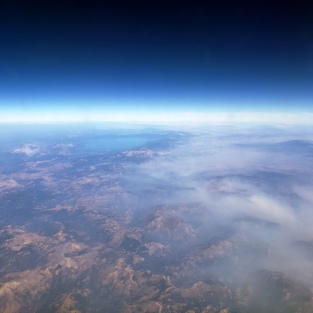 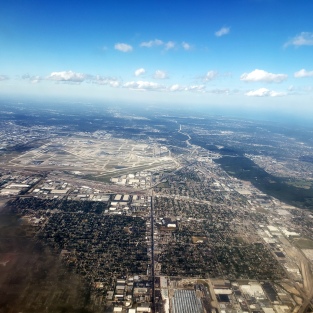 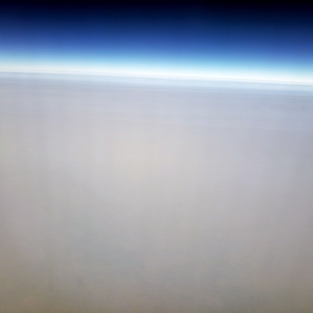 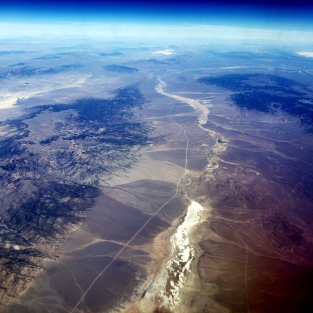 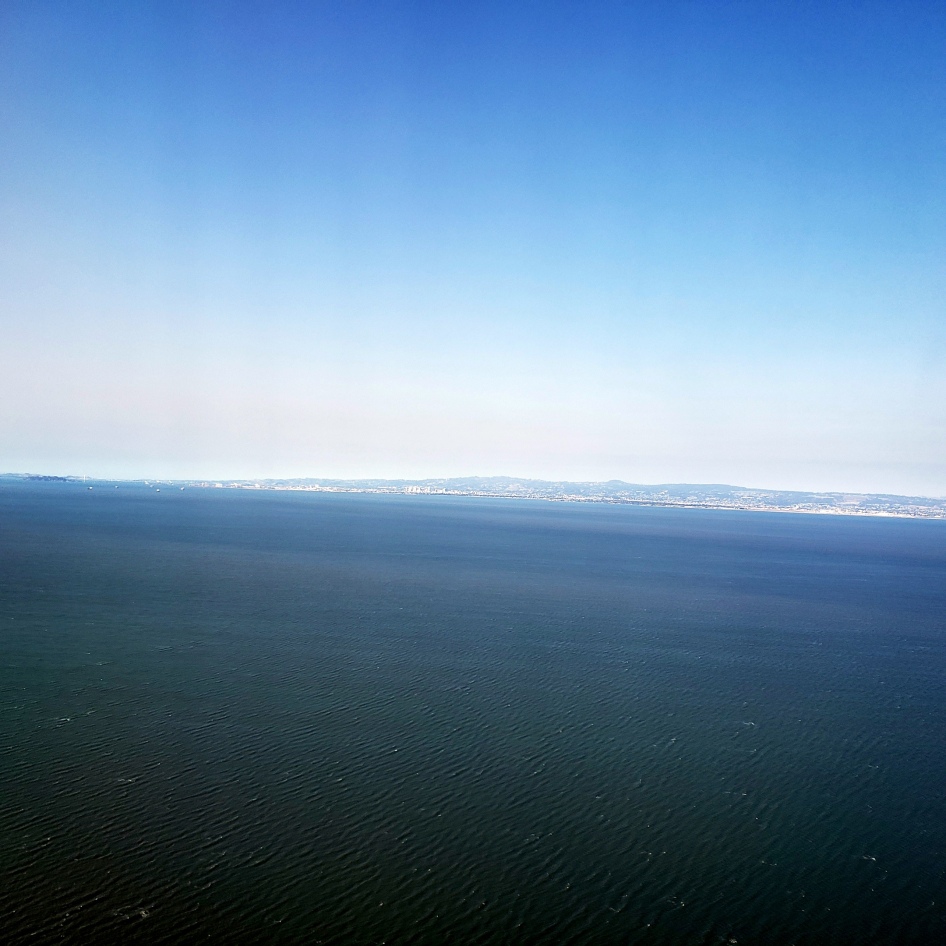 From the River to the Plains 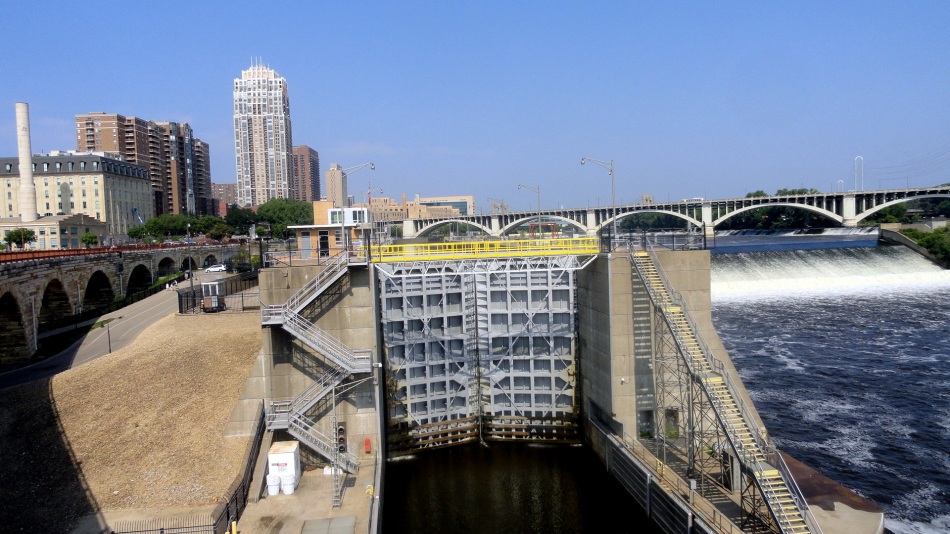 The photographic record of Mom & Paul’s excellent road trip continues with some images from the Minnesota-South Dakota-Nebraska leg of the journey. (And btw, for anyone growing weary of these rambles through the vast heartland of my homeland, fear not, there’s only one more entry due about the road trip, which wrapped up just two states south of where this entry concludes.) In Minnesota, we got to spend a few days being shown various lovely corners of the Twin Cities (Minneapolis &  St. Paul) by my oldest friend, someone I’ve known as long as I can remember going back to elementary-school days.  So what you’ll see here include shots taken on and around the Stone Arch Bridge over the Mississippi river, in the heart of downtown Minneapolis (including the cool panoramic shot below in which the nature of the camera’s panoramic-image compilation means that the cyclist who was biking past as I took the shot appears in a cool little stop-action sequence…), followed by the only photo I kept from our journey across most of South Dakota, taken at our lunch & rest stop just west of the Missouri River. From there, we kept driving onward toward Nebraska, where Mom had been looking forward to visiting Carhenge, an unusual outdoor sculpture park just north of the town of Alliance, Nebraska. This puts it also close to Chadron, where I’ve learned my grandfather attended college back in the day…hence the photo of Mom on the campus. Enjoy.

Having grown up in the US, I’ve always known a lot of our wheat seems to come from North Dakota. What never occurred to me was that, a  hundred and more years ago as our Euro-immigrant ancestors spread across the continent and dispossessed the prior inhabitants, their wheat would need to be milled and their other farm products marketed. The twin cities, it appears, gained much of their early prosperity by dint of turning wheat kernels into flour…witness the many descendants of flour and milling companies still headquartered there.

…look closely above, and any water you see in the distance is the Missouri River which we’ve just crossed in central South Dakota. Below, a fish-eye view of the main Carhenge scultpure, with other items also on display at the Carhenge Sculpture Park. 🙂 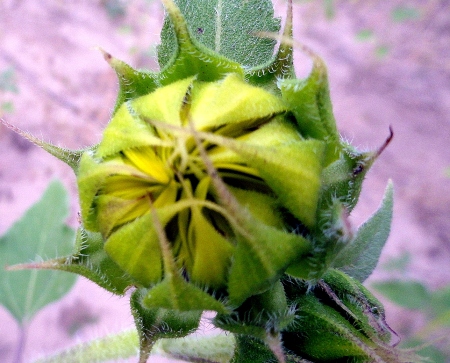 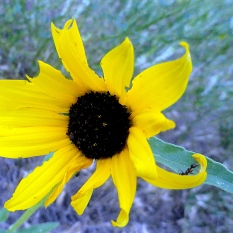 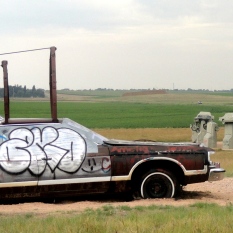 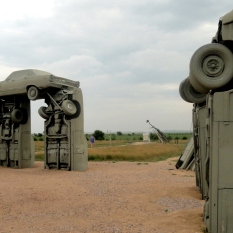 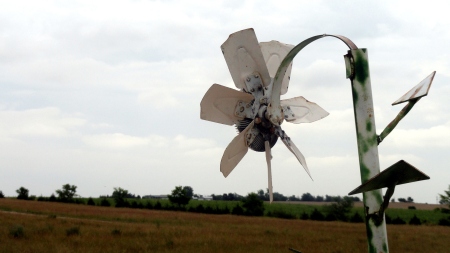 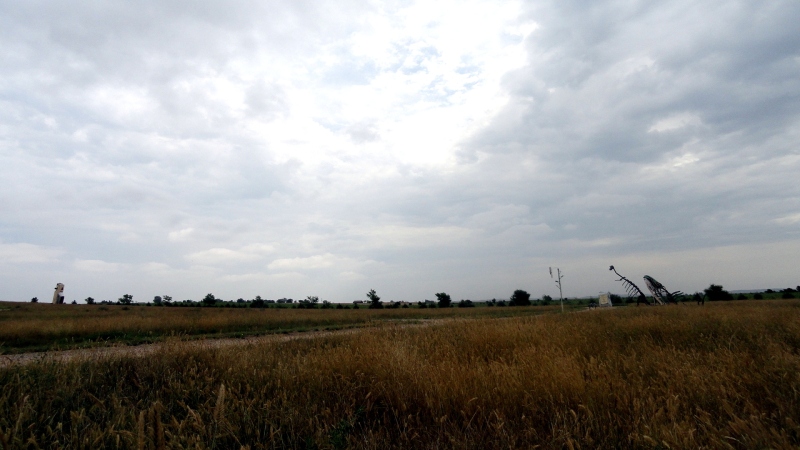 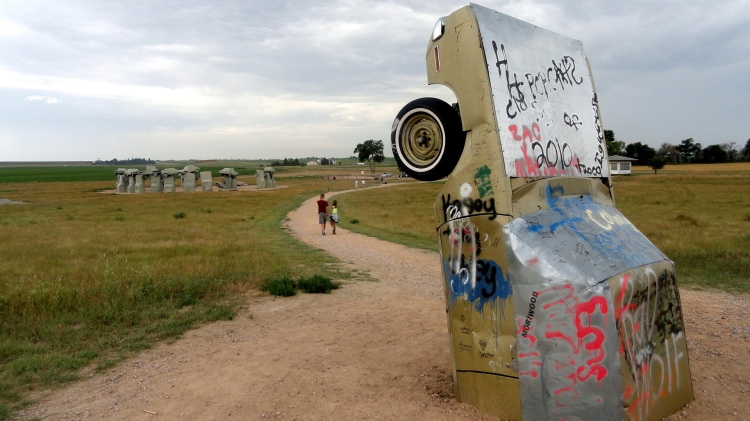 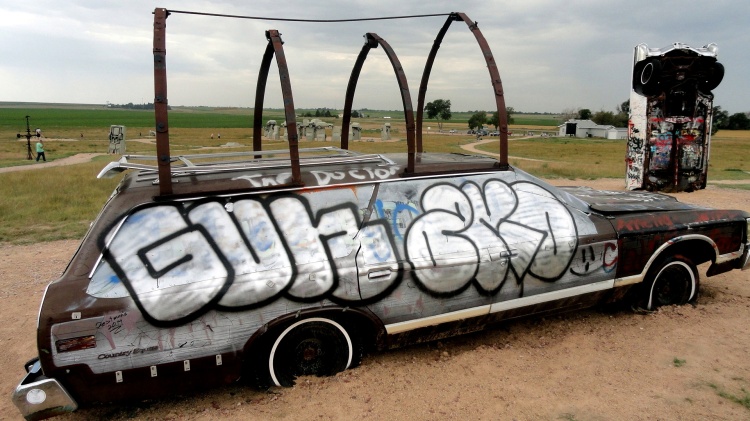 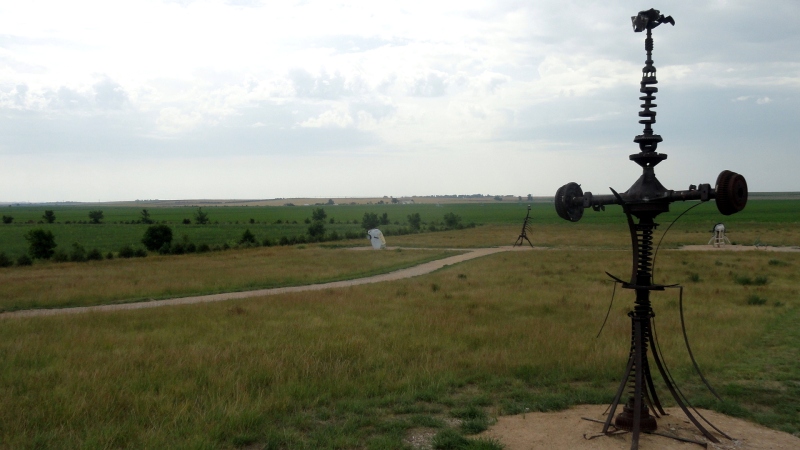 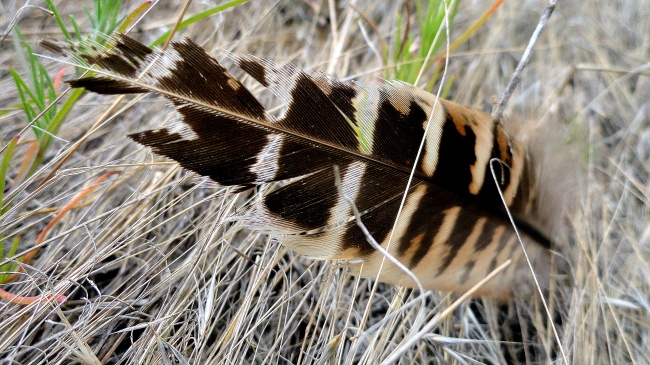