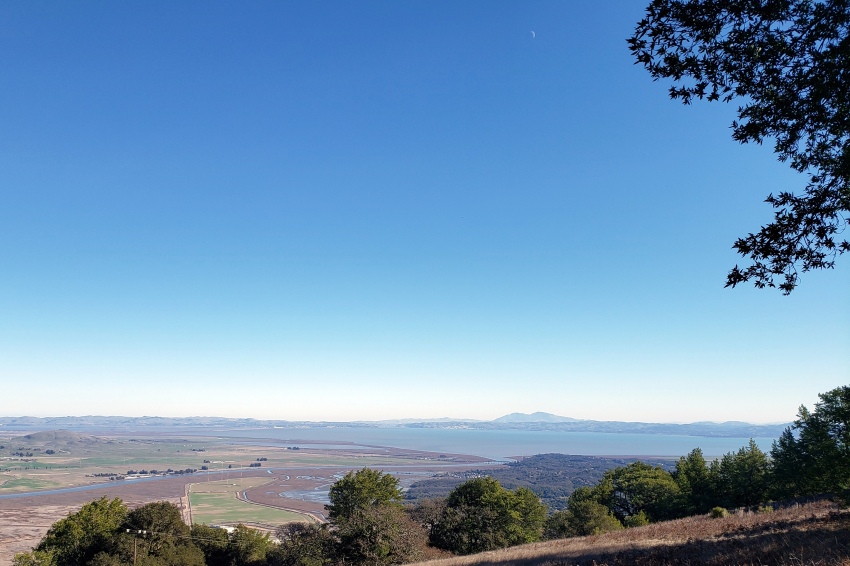 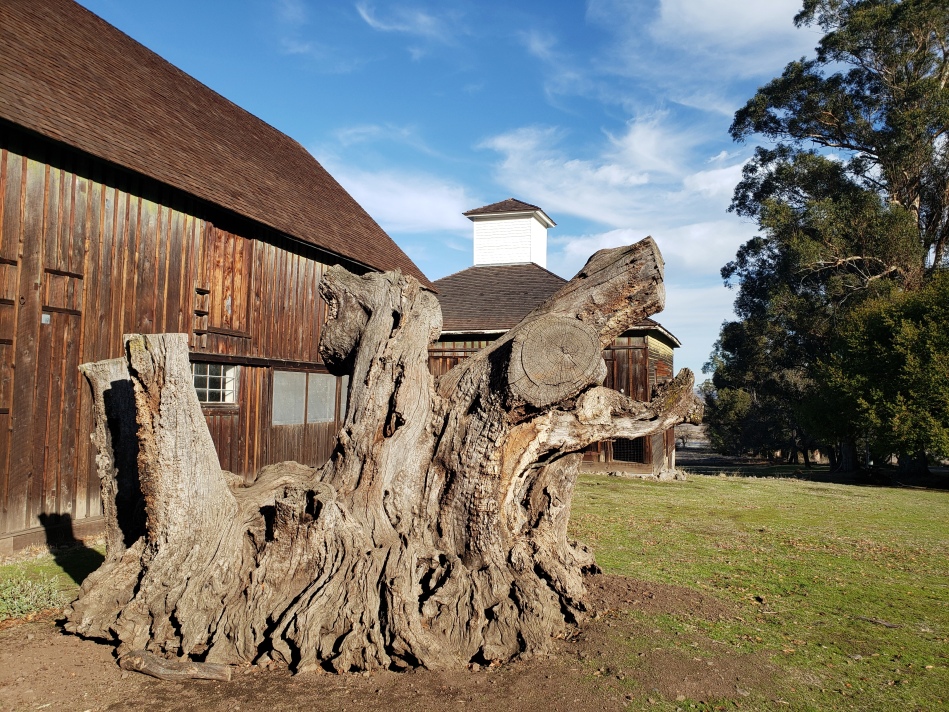 Olompali State Historic Park fits into northerneasternmost Marin County where it meets Sonoma County, along Rte 101. North of the town of Novato, it’s a place I’ve driven past often whether in public buses or in private cars, but hadn’t ever explored until last month, when I and a friend in SF chose it as our park-in-the-middle to explore, so as to both see each other and remain relatively covid-safe through outdoor socializing. We went again earlier this week, along with a beloved member of the next generation, and I’m putting a lot of the larger-vista photos in this post. (You’ve already been seeing some close up shots from both trips in various other series.) Olompali is a place where California’s layers of history are present: farthest back, as an important local hub for the Coast Miwok, who were the indigenous first humans to settle in this region. Later on, it became the only place we know of in California where a Miwok received from the Spanish colonial government a land grand to stay on and work the land. Later still, it was the only place recorded where a Mexican solider died during the Bear-Republic conflict that was a local manifestation of the war that took control of modern-day California (plus a whole lot more of the current American west) away from Mexico. Later still – hey, the Grateful Dead hung out there for a while in the late 60s or early 70s.

Fascinating place, and good to be reminded of the complex layers of human-habitation history that surround us here. For the moment though, enjoy the photos from one trip in late December, another in mid-January. Mid-January photos, though taken on a scary-warm day, are generally greener because at least some inches of rain fell between the two visits. From the heights, one can see several regionally-important peaks: Mt Diablo in the east bay; Mt Tamalpais in Marin (which you saw from the south, in the Hill 88 post recently); Mt St Helena peaking over a ridge in at least one of the shots. You can also catch a few of the highest towers in SF peeking over the Marin headlands behind the town of Novato in one or two shots, if you know where to look. Enjoy – and may all our vistas be clear, but with enough clouds to bring the rain we need to grow… 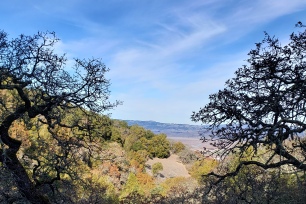 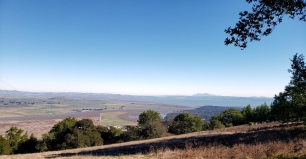 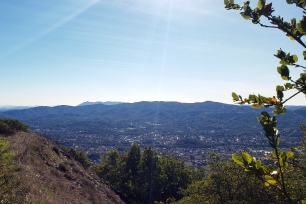 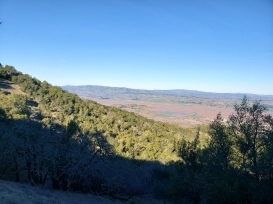 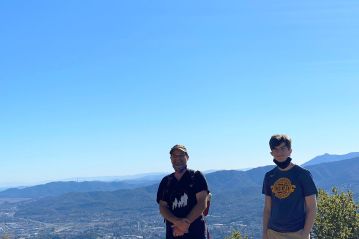 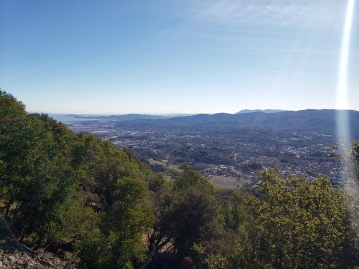 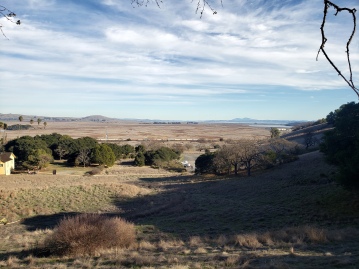 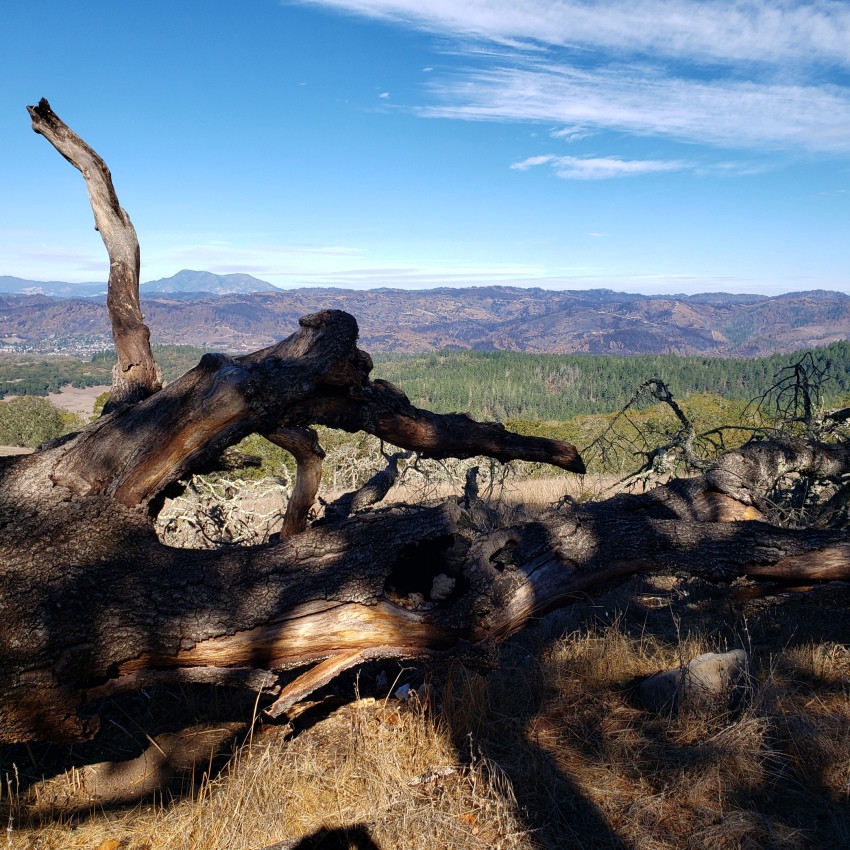 Consider this something like a special edition of Beauty & The Burn, and County Views combined.  People who’ve heard of our region’s wine country are most likely to know the name Napa, and possibly the name Sonoma. Before 2017, folks mostly thought of this region for its wines, if they thought of it at all. Since then, well, you know we’ve had more and bigger fires than anyone had seen in recorded history thanks to, you guessed it, climate change and our greedy society’s stubborn inability to reimagine life without the burning of fossil fuels. Locally, when we meet someone new and they say they’re from xx or yy location, it’s reasonably common to ask – when relevant given where they live – “did you and your family do ok in the Glass / Nunns / Tubbs / Walbridge fire?”

The most recent of those four was the Glass Fire, which started on the Napa County side of the (twice-burned) ridge you see above, then burned its destructive way over onto the Sonoma County side. The fire crews worked hard to keep it from burning all of Mt St Helena. You can see this dramatic mountain in every picture in this post. It’s the core of Robert Louis Stevenson State Park, has five different peaks, and straddles both Napa and Sonoma Counties as well as Lake County, at the point where all three counties meet. Its highest peak is also the highest point in Sonoma County at 4,342 feet above sea level; another of its peaks is the highest point in Napa County. Once I get far enough away from our local ridge (in which the highest point is Mt Hood at 2730 feet above sea level) to see past it, Mt St Helena’s profile is quite visible. In case you didn’t guess, it’s volcanic in origin although it’s not an actual volcano, just uplifted rocks from a 2.4-million-year-old volcanic field. 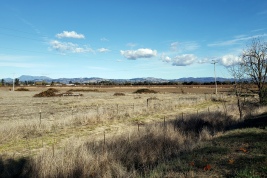 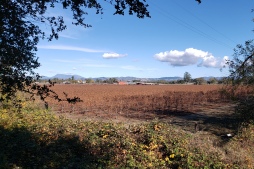 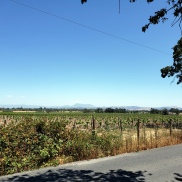 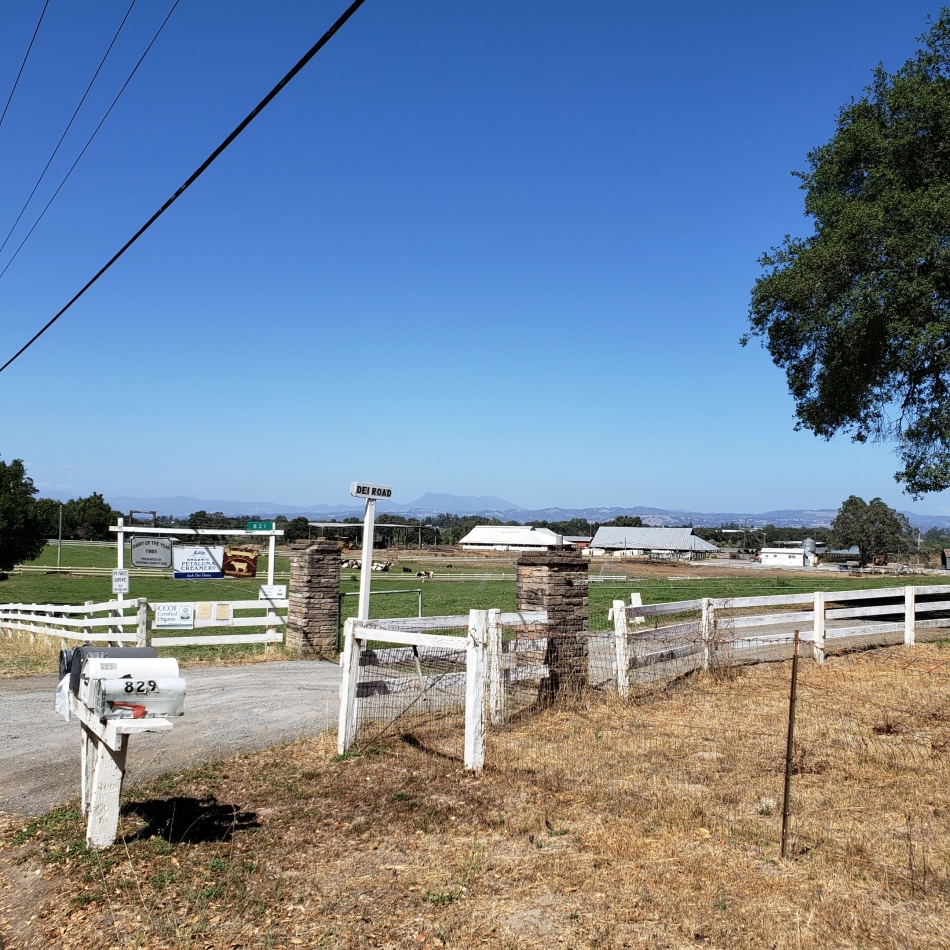 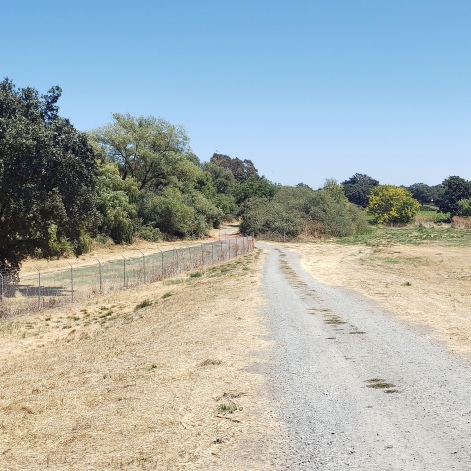 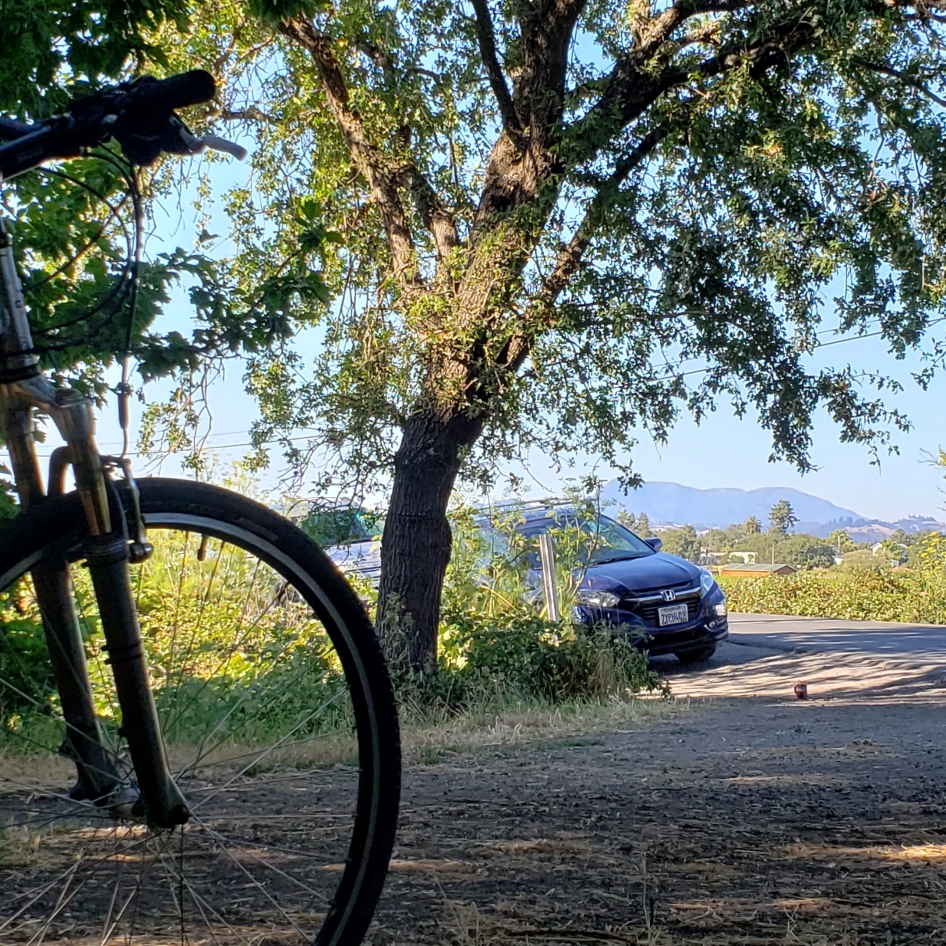 Since I don’t usually have much bandwidth when I’m on field assignments, I never adopted video. Recently, when spending more time at home, I’ve been taking more short videos to show friends a different angle of how I occupy my time when I’m at home here in Santa Rosa. For example: the photo above, taken from the Santa Rosa Creek Bike Trail, was taken about the same place the video below, which shows an egret fishing in the creek. And you can see me biking up and down the trails a bit, courtesy of another biker who agreed to do the video. There’s also a video of an evening street fair with its band, last December…and rain dripping down the bark of a tree as I walked my neighborhood one rainy day last year after my surgery. Hope you enjoy :-). 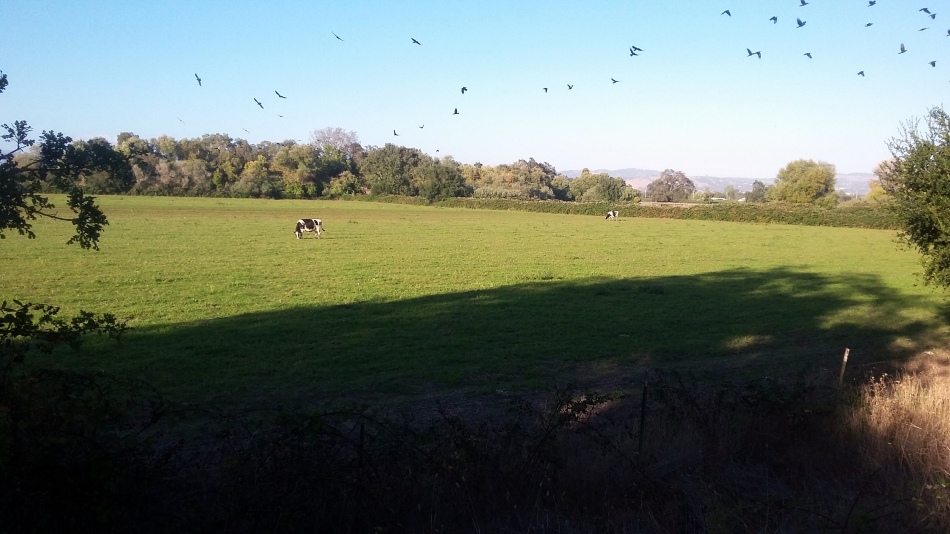