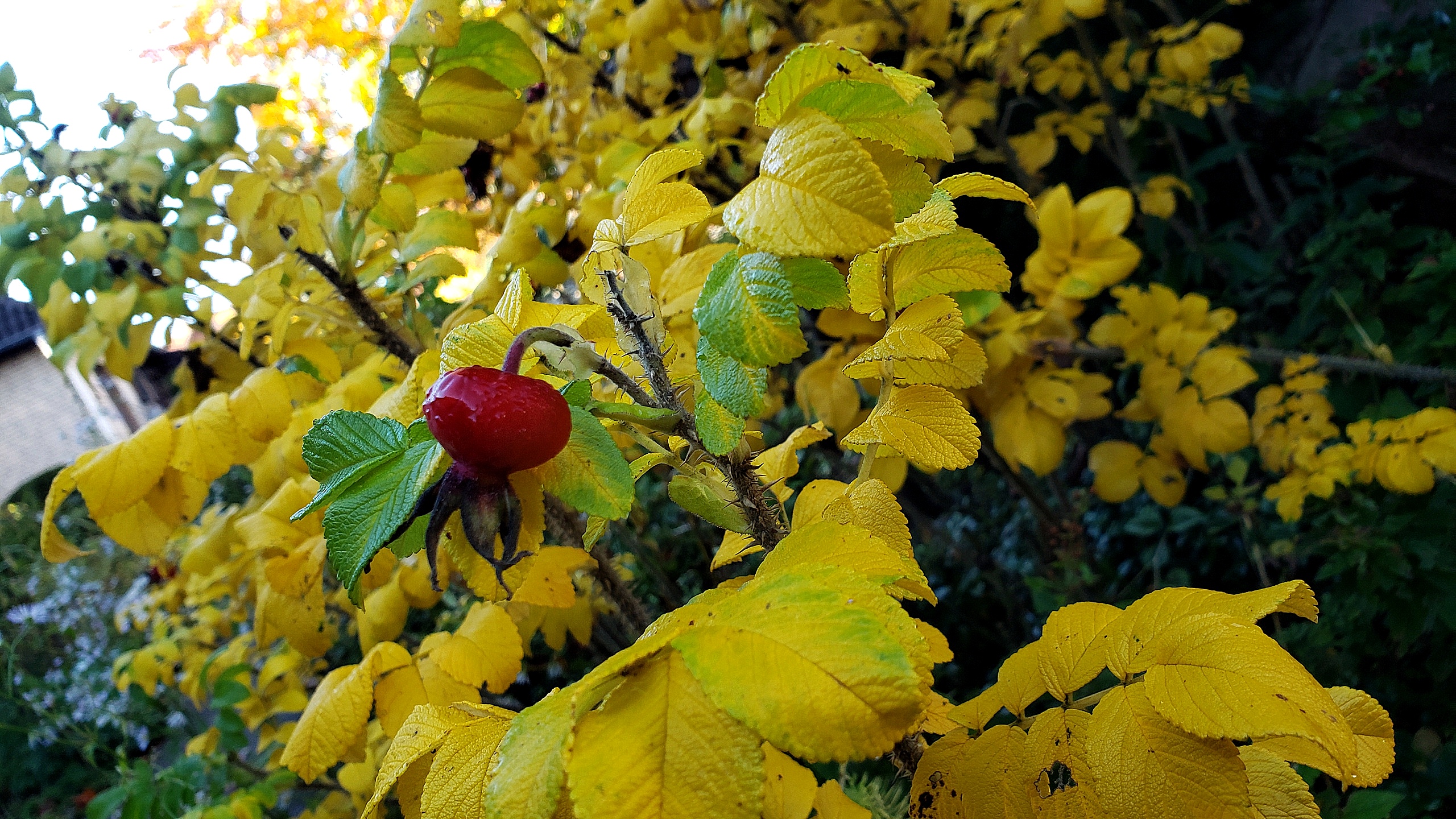 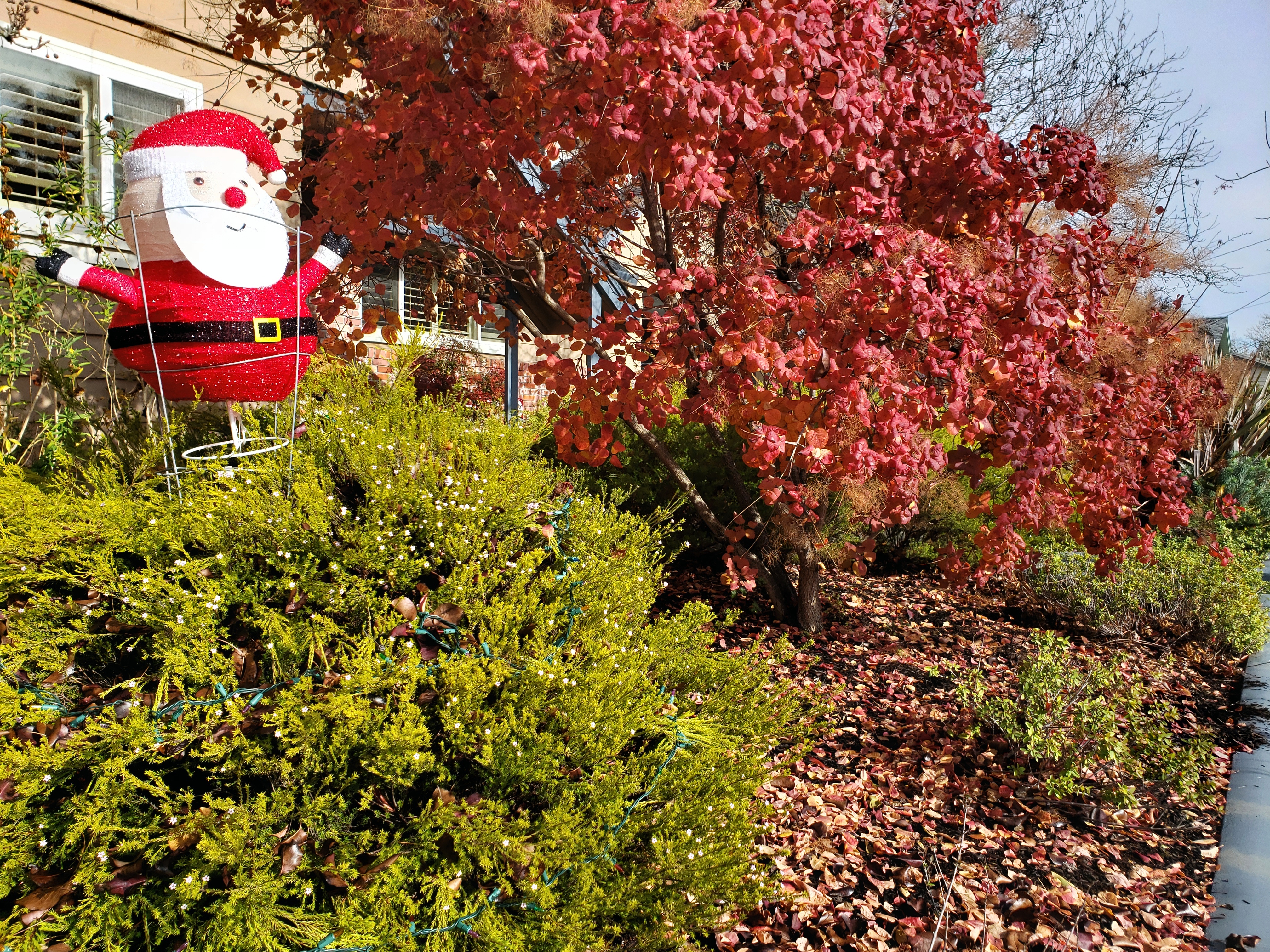 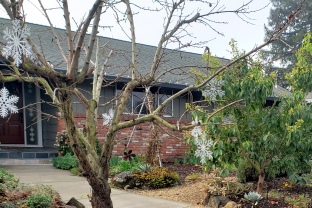 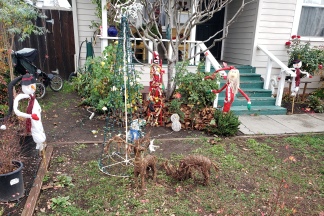 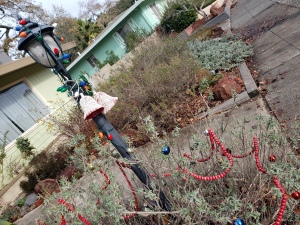 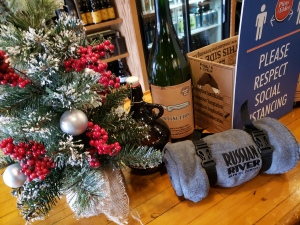 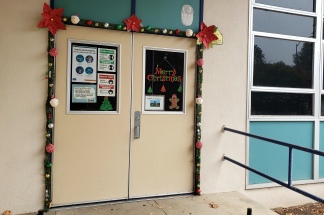 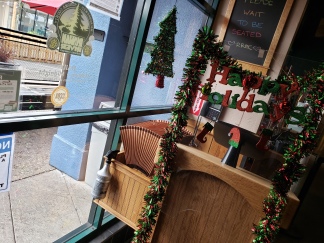 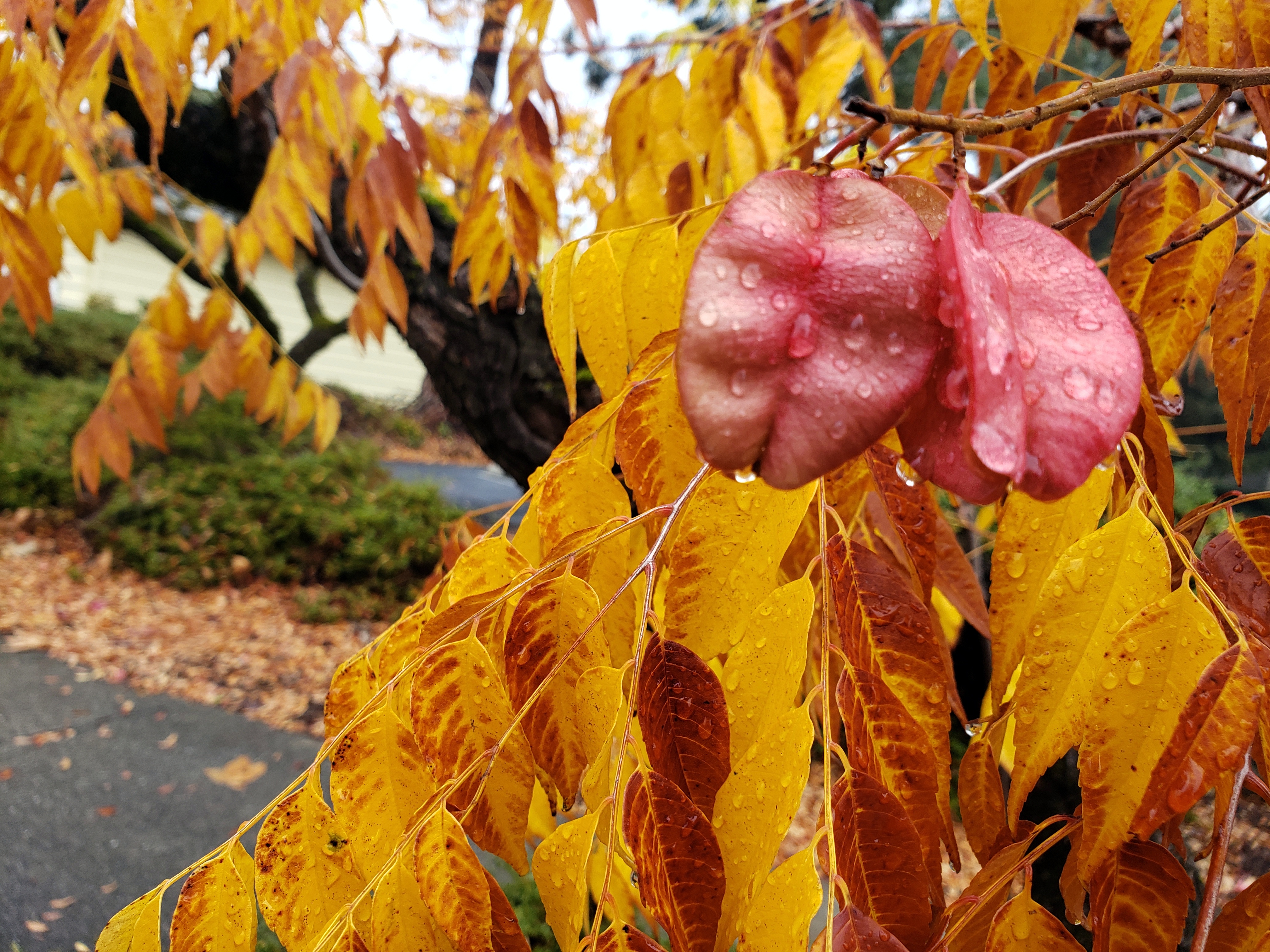 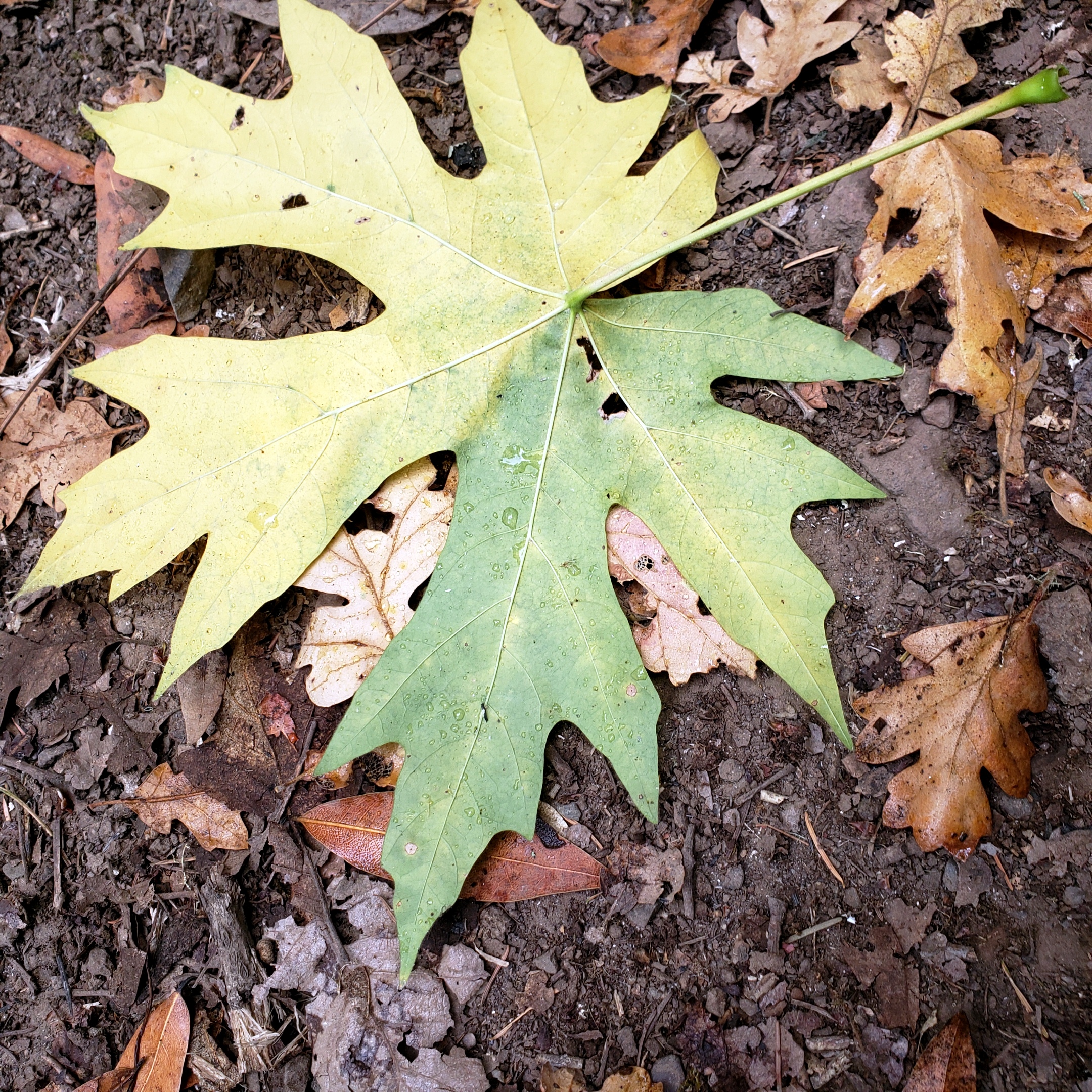 A gorgeous late-afternoon moonrise at sunset on Native American Heritage Day, along the Russian River. 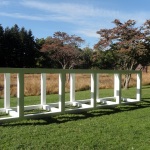 Sculpture in nature, plus the Moodna Viaduct (just below) which isn’t in the park but on a lovely winding route we took home, much to my smartphone’s map’s discontent. This is the second set of photos from our completely lovely day in Storm King two months ago – the first set was published here: https://somuchworldsolittletime.com/2017/12/13/art-family-in-nature-storm-king-1/, and you can find many other entries from Storm King in past years. It and the Hudson Valley’s many other art centers are well worth a visit. 🙂 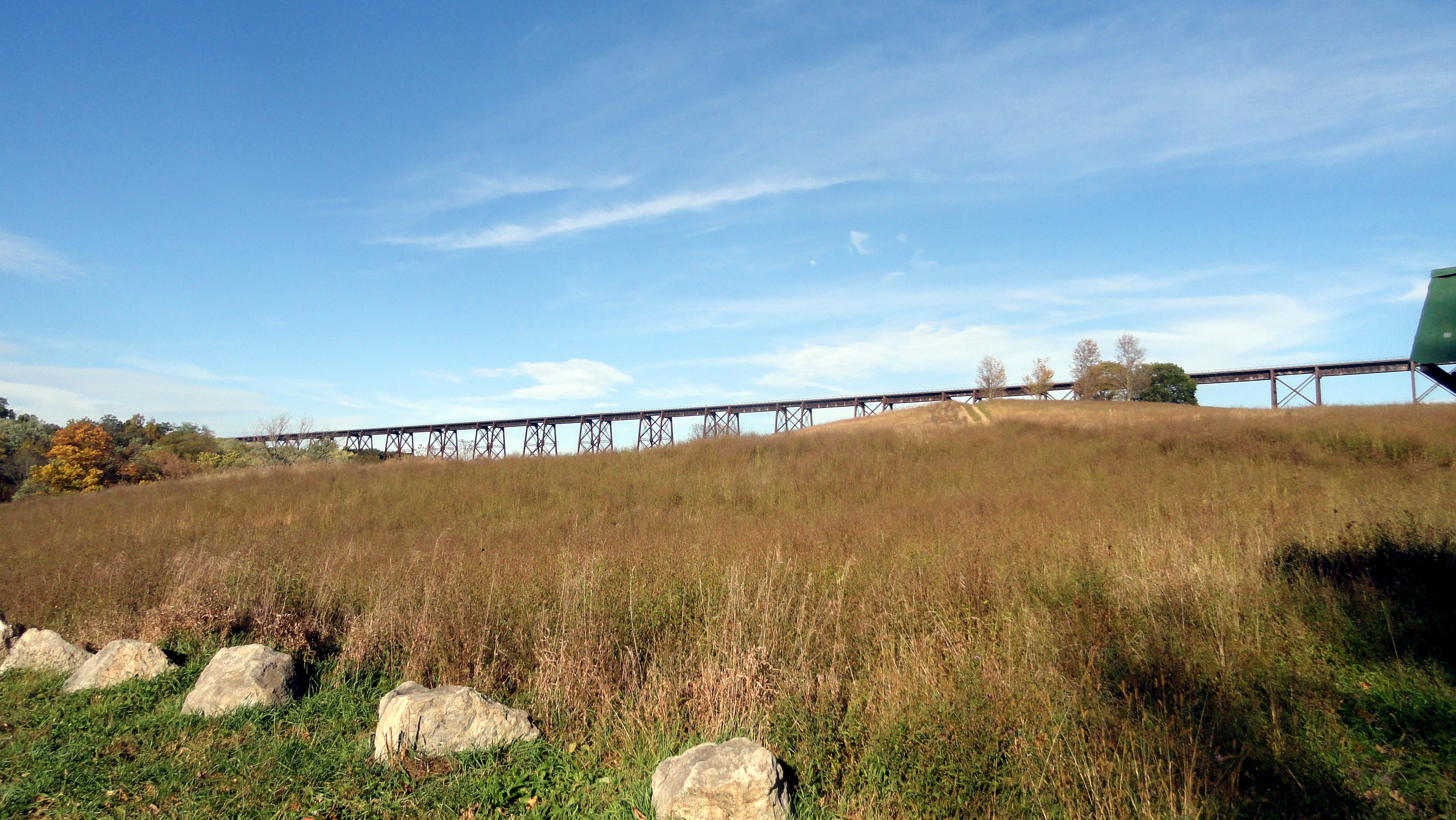 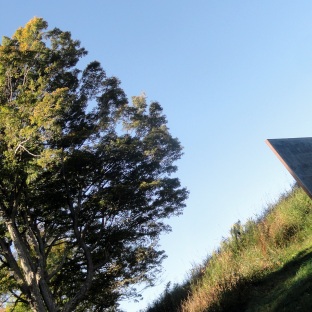 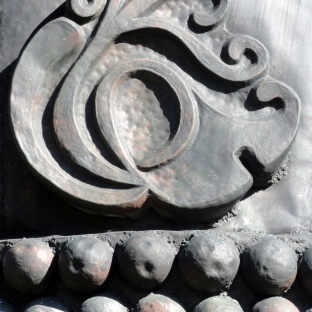 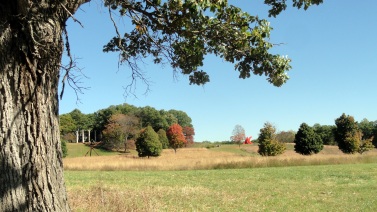 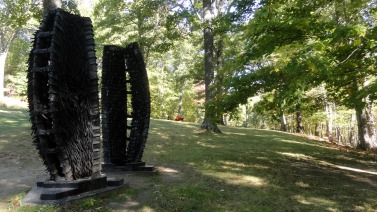 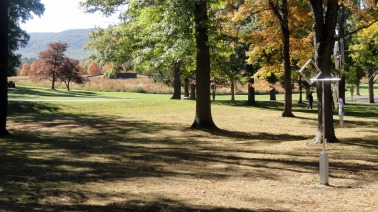 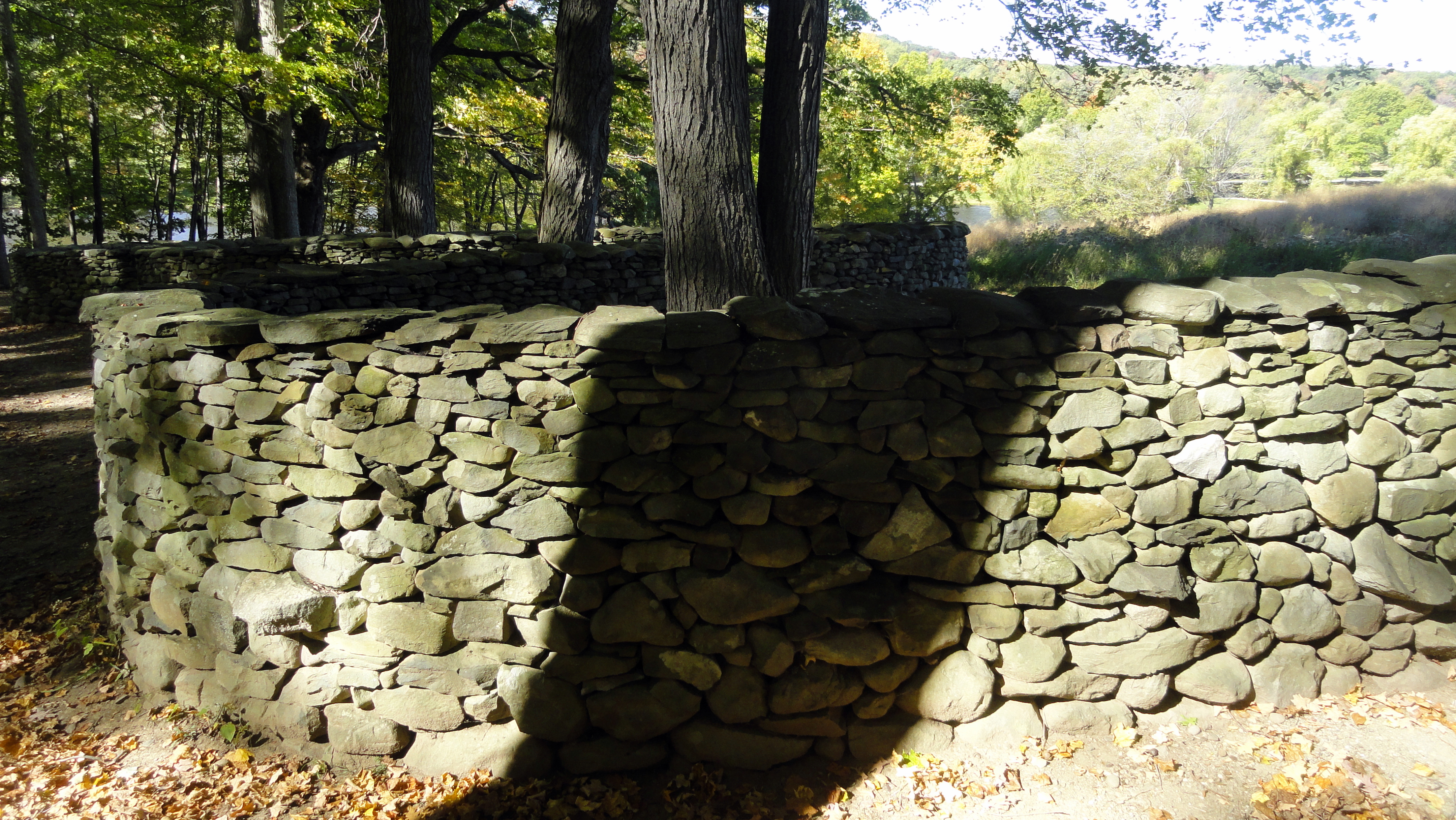 Last Friday I stepped out my door, lurched down the stairs in my building, and went for a walk. Within the first 100 steps, I experienced new and strange emotional reactions to something so terribly simple as going for a walk down my block. I feared I’d fall, I feared a kid on a skateboard would bump into me or someone might beat me up, I feared a bicyclist might hit me or a dog might leap up and put its paws on my stomach. So many fears for one small person taking a simple walk down the block!

As I walked, I grew more familiar with my new limitations, aches and pains. I also slowly felt my envelope of of pain-free and reduced-fear activity expand ever so slightly. In the end, I walked more than a mile into downtown Santa Rosa and bought myself a ticket to the matinee of the new Blade Runner. (It’s very contemplative; so relieved in this ADHD-age someone is still doing slow & contemplative on the big screen.) And I probably grew a bit as a human through this process.

Both above and below, you see how fast the fire moved: notice the fence post burned at the bottom but not at the top.

Seven days ago I had hernia-repair surgery. The walk, two days later, was the first time I’d been out and about on my own with my newly-sore, cut-open and compromised abdomen. Every movement I made (or tried to make) reminded me why we call this our ‘core’ – my abdomen came into play when I tried to blow my nose or sneeze; when I tried to walk faster to catch a traffic light so as to cross an intersection; any time I tried to roll over in bed or sit up or go to the toilet. It was a newly-humbling experience, to feel so very vulnerable. I’ve spent something like 1/5 of my life in places with poorer resources and support for the vulnerable and weak than right here, yet it’s here that I experienced one of my most jarring moments of fear and vulnerability.

A good reminder to take nothing for granted. This, for me, calls forth a response of gratitude & appreciation for all that I do have. Especially since I know my friends, colleagues & interlocutors in other settings don’t have many of these blessings and advantages. At the start of November, I spent a week being tour guide with the Forced From Home exhibit, in which I and other staff who’ve worked in field positions with MSF guide small groups around several stations depicting the realities of having to flee one’s home, and what one might encounter along the way. Before we opened, most of us tour guides seemed to agree that what we most hoped our groups would take away from the exhibit was an abiding sense of appreciation of what we do have. (Shout out to all the clinical colleagues who take care of me & keep me safe during my most vulnerable moments in the field, btw…)

(If curious, check out this article with a quote or two from me:

– I’ll have some more photos up from Oakland me doing the tour thing, at some point in coming weeks/months…) 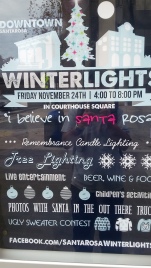 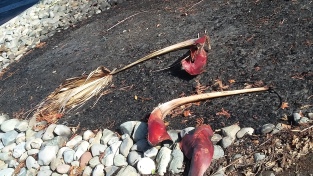 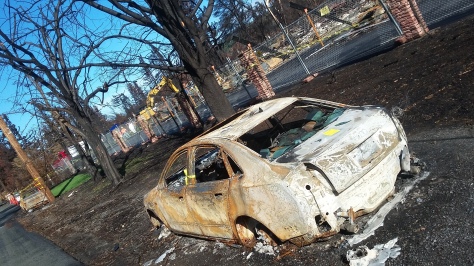 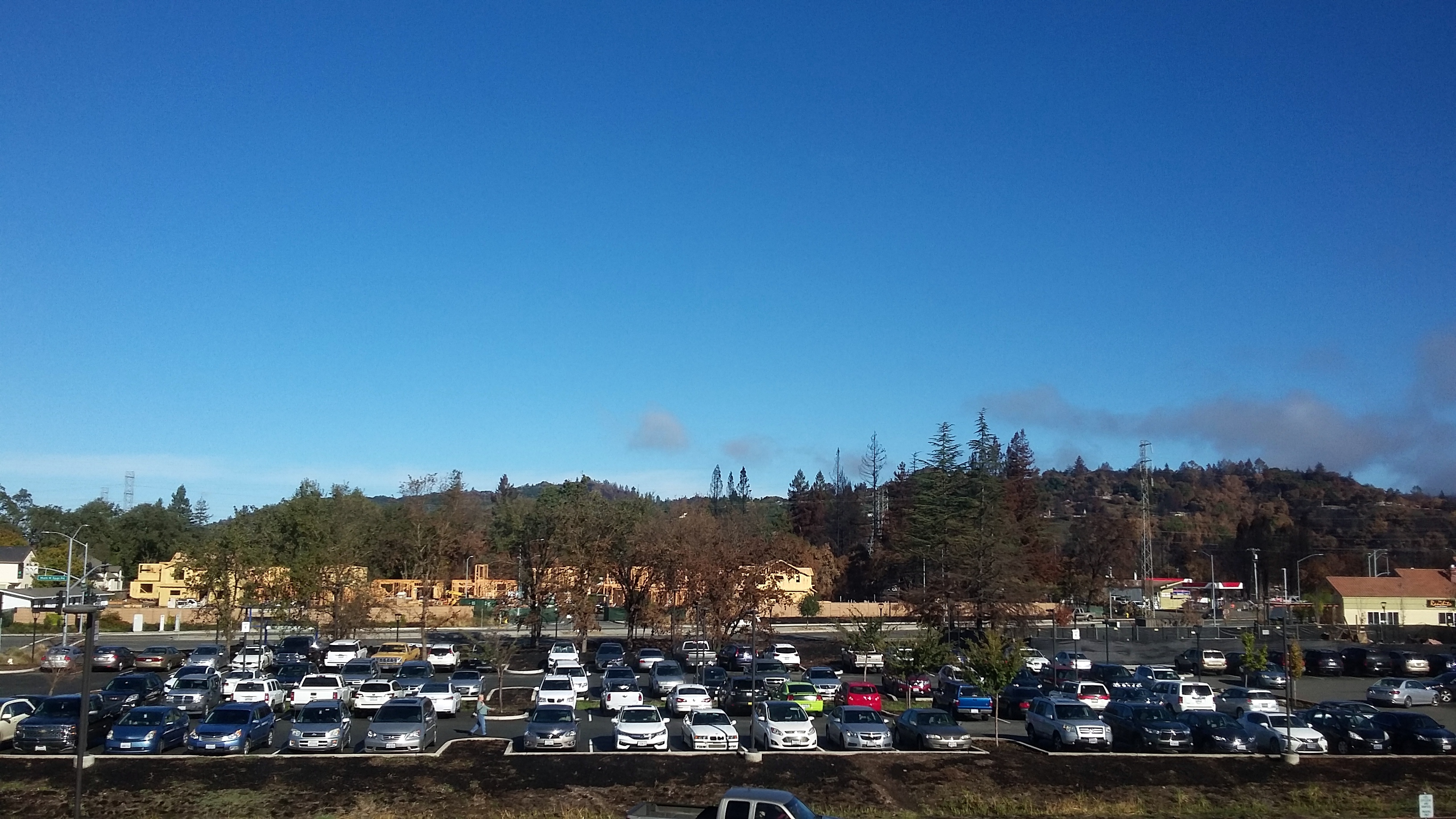 That week guiding tour groups through the exhibit in Oakland was especially poignant for me, because my home city of Santa Rosa is still in the long and painful process of recovery from the wild fires. Like me, several local friends have commented that we are reluctant to drive (in my case, bike) around the most-affected zone – or take photos there. It feels almost voyeuristic, and possibly disrespectful of direct human pain and loss resident in those areas. My surgeon’s office is in one of the large buildings that survived the first, most destructive fires. A week before the operation, I biked the eight miles from home up to his office for my pre-op consultation. This post is mostly full of photos I took that day – along Redwood Highway north of downtown Santa Rosa. The burn-related photos were taken on November 14, five weeks after the first fires struck. At one main intersection (the photo just above), the buildings at three corners were destroyed while a gas station at the northwest corner stood, as did the construction site immediately west of it. This was all visible from the waiting room in my surgeon’s office. And I saw an unusual number of people who, like me, were standing to look out the windows from this higher vantage point, scanning the hills and taking stock.

The fires, like my surgery, remind me of my own vulnerability and human frailty. They also remind me of my many blessings, friends, gifts and joys. One of my best friends dropped me off & picked me up after surgery – he and his extended family also hosted me the following day for Thanksgiving surrounded by three generations of kids, parents & grandparents.  (The photo just below is of a woozy-looking me with Howard, at my apartment after he brought me home.) My mother is recovering wonderfully well (knock wood) from her own, far more serious surgery. And I have fundamentally safe streets with sidewalks down which I can stroll, appreciating fall foliage and now all the displays of Christmas decorations going up, as I steadily rebuild my body’s strength and capacity in preparation for what I firmly expect will be an enjoyable end of year holiday season with friends and family. My Unitarian-Universalist congregation has focused on faith, this month: in what do we place our faith. I choose to have faith that the sun will continue to rise, that seeds will continue to sprout, and that it is always good to be kind and generous to those around us. Even if this makes me wildly crazy in the eyes of the pessimists among us, I find it simply so very much more enjoyable to be kind than not. I hope you’ll join me 😊. Peace. 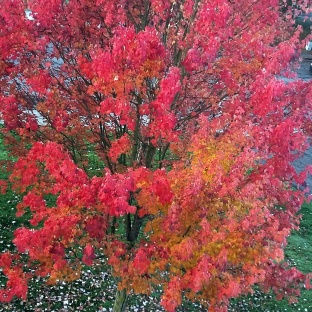 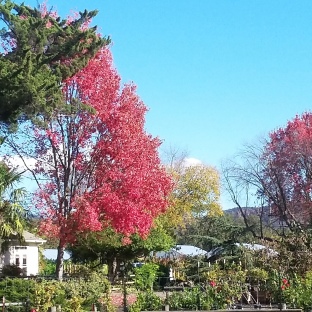 Above, me on that vulnerable first walk after surgery and some of the red fall foliage that I’m so over-the-top in love with; below, Cardinal Newman HS athletic fields with a burned hillside behind. Below that, two photos from the Ft Ross area which I just happened to have on hand from a trip with another visiting friend a week or two earlier. For those who don’t know: Ft Ross is a totally cool state historic park documenting the southernmost imperial Russian presence on the west coast of North America; including this rebuilt Russian Orthodox church. SO cool. 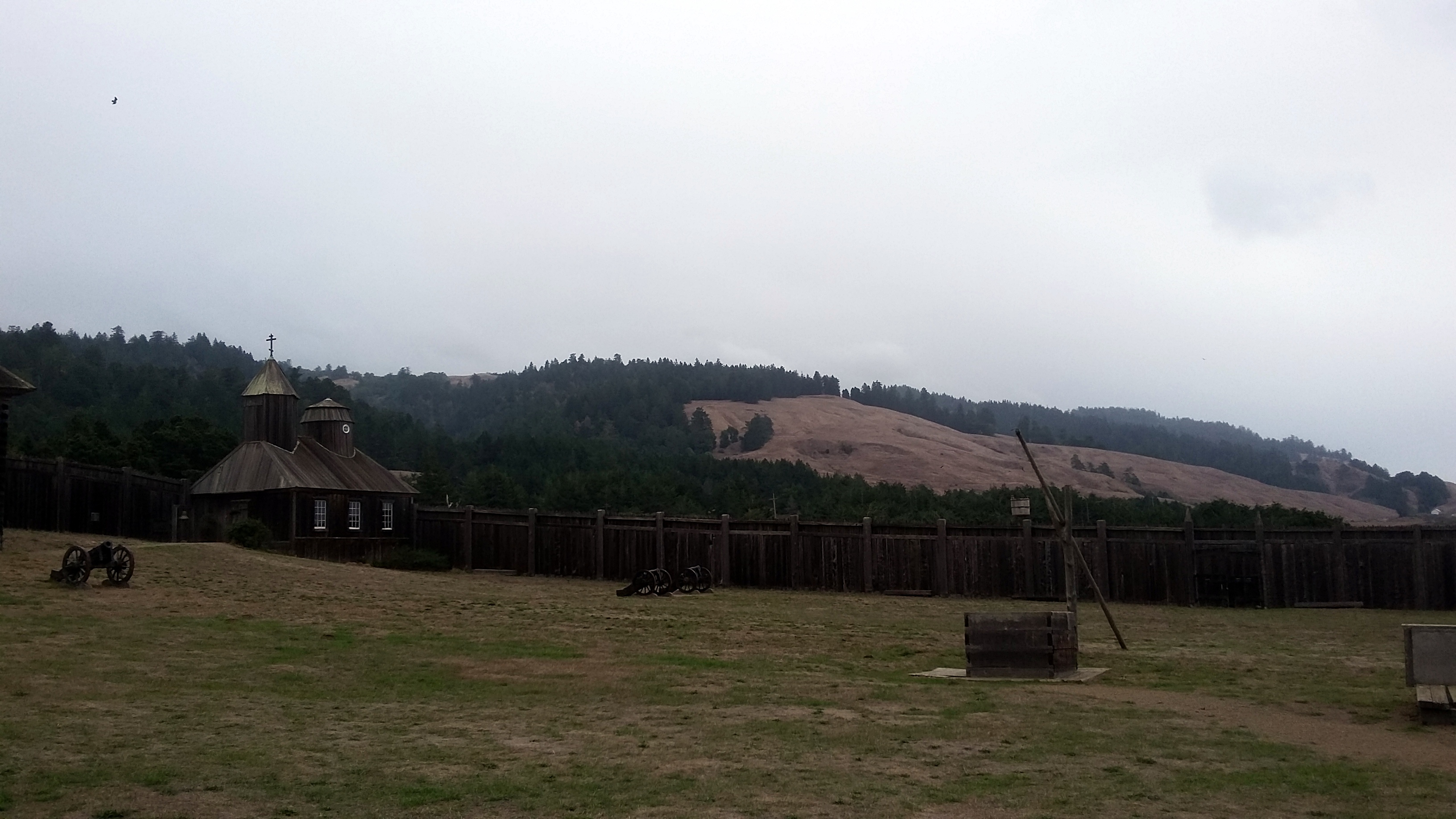